The buzz surrounding Tesla’s Model 3 has been loud and constant since at least 2016. Now, the luxury electric sedan finally makes its debut Canadian appearance, in Toronto on the occasion of the 2018 Canadian International AutoShow.

The Tesla Model 3 is a smaller, more pared down and more affordable car than the Model S we all know. About the size of a Civic, it is selling for $35,000 in the United States, but Canadian pricing has not been announced as of yet. Buyers can expect, however, to benefit from government incentives in Quebec ($8,000) and Ontario ($14,000).

The interior is surprisingly spacious for the size of the car and can accommodate five adults. Presiding over its instrument panel is a large 15-inch touchscreen with navigation and WiFi connectivity. The Model 3 contains a sizable rear trunk for luggage, as well as a second trunk in the front.

What many are itching to know, of course, are the performance capabilities of the Tesla Model 3. The car can accelerate from 0-100 km/h in just over five seconds and has a range of either 354 or 499 km, depending on the battery chosen. Of the electric vehicles currently sold in Canada, only the Chevrolet Bolt EV and its 383 km can compare.

Tesla is vaunting the merits of the Model 3 in terms of safety. To that end the car features automatic emergency braking with collision avoidance assist, and, like the Model S, is equipped with semi-autonomous driving capability via Tesla’s Autopilot technology.

The problem for Tesla remains, as it has for seemingly forever, in terms of its ability to deliver vehicles to customers. Any Model 3s ordered today will likely not be handed over to their owners before the end of 2018. Patience is in order, Tesla lovers! 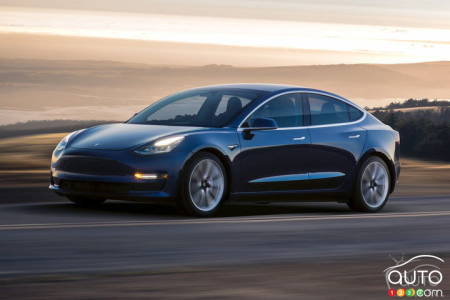 Tesla has increased Canadian pricing on two of its models, which happen to be the most in-demand in the lineup. The Model 3 Standard Range Plus now costs buy...

Hertz has purchased 100,000 Teslas for its various rental outlets. The move will bring the company's share of all-electric vehicles to 20 percent, and it rep...