In recent years, at every new product presentation put on by Toyota, the question of Apple CarPlay and Android Auto integration has come up. And it came up because the automaker was not offering compatibility for the platforms in its vehicles, because it had not finalized any agreements with the giants behind them, Apple and Google.

Toyota finally worked out a deal with Apple this past January, but since then Toyota has continued to offer an internally-developed connectivity system, called Entune, for users of Android phones. The Toyota app was developed based on a system created by Ford.

Now it seems that the automaker may finally have finalized a deal with Google. Nothing has bene confirmed by either party, but a source close to the negotiations told the Bloomberg news magazine it was a done deal. Another source has indicated that an official announcement will be made in October.

A factor affecting buying decisions
While this may seem like no big deal to those who don’t use either of these popular apps, the availability of the systems in vehicles is actually becoming a factor that affects many consumers’ buying or leasing decisions. Toyota had taken notice that some buyers were turning to competitors’ models in order to benefit from the apps.

In short, Apple CarPlay and Android Auto integration allows users to access the exact functions of their smartphones directly on the vehicle’s multimedia system. The phone’s screen display is transferred to the one on the central console.

Up to now, Toyota has been reticent to finalize any deals with Google and Apple, mainly for security reasons. In the end, though, bottom-line concerns trumped all of that. The automaker smartly decided it could ill afford to lose sales over this one missing feature.

It’s estimated that some 80% of smartphone owners currently use the Android platform. 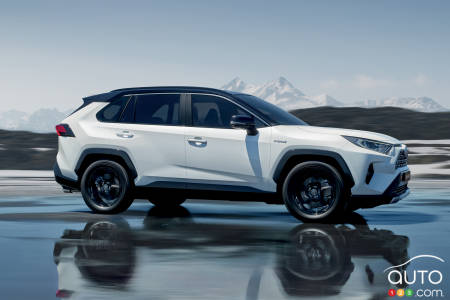 Google previews the simplified new interface and improvements it’s giving its Android Auto interface. Set to debut this summer, the new version will be more ...