Toyota announced on Friday that it is moving up the target dates for its electrification plan. The company had previously said it wants to be producing 5.5 million EVs per year by 2030, but that’s now been moved up to 2025.

At the heart of this accelerated schedule is the development of vehicles using solid-state instead of lithium-ion batteries. Two or three years back, Toyota had said it was aiming to have a first model running on solid-state batteries ready by 2022 or 2023. But now the automaker wants to present its first such vehicle be next year.

“If possible, by the time we have the Olympic games next year, we would like to make sure that a solid-state battery can be unveiled to the public.” 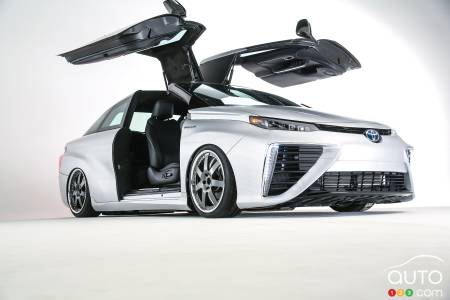 These batteries are widely considered to be capable of revolutionizing the electric-mobility sector. They use solid electrolytes instead of liquid like in lithium-ion batteries, and so are less prone to overheating. What’s more, they can recharged in minutes instead of hours like most EV battery packs todays. And because they’re lighter and denser, and they can storage more energy; from this we can assume they’ll deliver longer ranges to future EVs equipped with the technology.

The down side is their prohibitive cost, at least for the moment, and costs will only be reduced when mass production begins. To that end, Toyota and Panasonic announced this past January they were going to work together to produce batteries, including solid-state products.

From electricity to hydrogen (with the Mirai, for example) and back to electricity, Toyota is covering a wide range of fronts. Of course, the Japanese automaker has little choice but to do so, particularly when it comes to electric powertrains. The Chinese government has said it wants one out of every five vehicles sold in its market to be electrified in some form by 2025. Given how central the Chinese market is to Toyota and other carmakers, no one can afford to miss the boat.

Subaru to Produce Only Electric Vehicles By 2035

Subaru has provided details of its electrification plan. The Japanese automaker wants 40% of its sales to consist of electric or hybrid vehicles by 2030, and...

The Volkswagen Group has bought enough batteries to be able to produce 50 million electric vehicles in the next few years; it’s also working on a new subcomp...