General Motors wants to make life easier for owners of its electric vehicles. To that end, the American automotive giant has just launched the new Ultium Charge 360 app.

This new application gives access to a charging station guide to help users find nearby stations, to the functions of other known GM applications, such as myChevrolet, and to various other tools intended for EV users.

The idea behind the app for GM is of course to alleviate range anxiety, and to make drivers feel freer to plan longer trips.

To achieve that, GM says the Ultium Charge 360 application will soon allow an EV driver to easily locate and see the availability of nearly 60,000 charging stations across Canada and the U.S. in real time and, once there, to initiate charging and pay the fee. 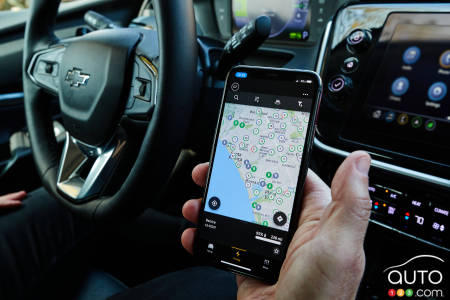 To power its new application, which is intended to be global in scale, GM will maintain close ties with charging network operators, power companies and government agencies.

Not included, however, is Electrify America's network of nearly 600 charging sites in the United States.

While GM Canada's announcement did not mention it, the American announcement specified that Ultium Charge 360 will also provide information on the nearly 500 high-speed Ultium charging stations developed and managed by EVgo that will be in operation by the end of 2021 in the U.S.

General Motors did not specify in its announcement whether there will be a fee for using its new app.