One of the most anticipated models coming down the pike in the next few years, across all categories and companies, is undoubtedly the Volkswagen ID.Buzz, that modern incarnation of the famous Type 2, but in electric form.

The design of the concept we've seen so far is simply stunning in fact it’s hard to imagine the model won’t be a big success. We won’t know this for a while, though, since the ID.Buzz isn’t expected until 2023 as a 2024 model.

Fortunately, eagle-eyed pro and amateur photographers are lurking everywhere, camera in hand. And so, inevitably, first spy images of a test version of the model have appeared online.

The two photos, shared on a Twitter account belonging to Cole Marzen, deliver a first tentative look at the model with what appears to be the body it will wear when it launches commercially, when in its van configuration. The images show a model similar to the concept, but with a few notable changes.

In front, the hood panel looks wider than on the concept. The logo is a little smaller and sits higher up where it crosses a chrome strip between the headlights. So much for the relationship with the rest of the ID lineup.

On the sides, the headlights join the recessed area that runs the length of the vehicle and which offers the perfect separation to offer a two-colour exterior finish.

The rear is rather conventional with very square corners and a spoiler that overhangs the window. The concept had a more rounded rear end. The license plate is placed lower to preserve some of the van's classic style.

It’s expected the ID.Buzz will receive the same mechanical innards as the ID.4, but the big caveat is that its debut is still far away and many things can change. The same goes for the styling, as more tweaks will surely be made to the final product. 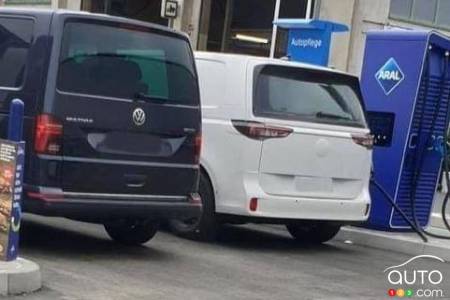