The Volkswagen ID.4 is coming to North America in the next few months. This week, the company's Canadian division announced pricing for the model, and those who might be thinking of buying the EV will be happy to learn that it will qualify for government rebates.

To reach eligibility, VW has priced the base model of the ID.4 at $44,995 in Canada. We're talking about the Pro variant, which comes with a rear-wheel drive configuration. The $5,000 federal rebate can therefore be applied, as can the incentives available in Quebec ($8,000) and British Columbia ($3,000). Built on the MEB platform conceived for electric powertrains, the ID.4 Pro version gets 201 hp and 229 lb-ft of torque from its powertrain. And, thanks to its 82-kWh battery, range will be around 400 km.

Incidentally, the vehicle will first be available in Quebec and British Columbia at select dealerships. Ontario will be next, followed by the rest of the country. 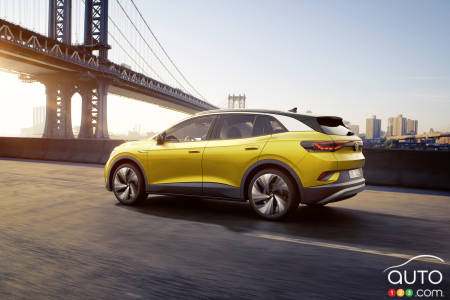 A second Pro variant, but with all-wheel drive, will later be offered for $49,995 and deliver more power, somewhere between 300-325 hp. An $8,000 option package will also be offered to increase the level of equipment while still meeting the standards for eligibility for government rebates. Among other things, that package brings 20-inch wheels, panoramic roof and 12-inch screen instead of the base 10-inch screen for the multimedia system.

American production of the model is scheduled to begin in 2022 at Volkswagen's Chattanooga, Tennessee plant. However, we won't have to wait until then to see the ID.4 debut in North America; the model is expected to arrive here somewhere in 2021.

We'll have more details on this vehicle when we get the chance to see and drive it.

Volkswagen Confirms It Plans to Bring Back the Scout Name

Volkswagen has confirmed that it will revive the Scout name, this time in the form of a sub-brand devoted to all-electric models. The first concepts are expe...

Volkswagen boss Herbert Diess says he believes it’s too early for the automotive industry to hope to make a full shift to all-electric lineups just yet. At t...