Utility vehicles rule the world – that’s as obvious as the orange crown on Trump’s head. The choice available to consumers is so vast that shopping for an SUV requires more hours of study than a university degree. I recently had the opportunity to drive concurrently a 2020 Volvo XC40 R-Design and a 2020 Volvo XC90 R-Design, both sporting the same Thunder Gray colour. I took that as fate telling me I should make use of some Great Confinement down time to come up with 10 things worth knowing about this pair of Swedes. And who am I to tempt fate?

Because marketing departments never could resist a good acronym, the modern utility model is known in the parlance as the SUV, for Sport Utility Vehicle of course. According to Wikipedia, this term designates a category of motorized vehicles that combine elements of a passenger car (ie, sedan) with certain capabilities of an all-terrain vehicle, for example higher ground clearance and all-wheel drive.

Now, that’s fine as far as it goes, but it doesn’t address the incredible level of refinement, comfort and even over-the-top luxuriousness of many present-day SUVs on the market. In the case of the two Volvos, you’re not likely to ever find yourself thinking you’re sitting in a Wrangler, for instance. Although, these days, even the Wrangler is getting airs…. 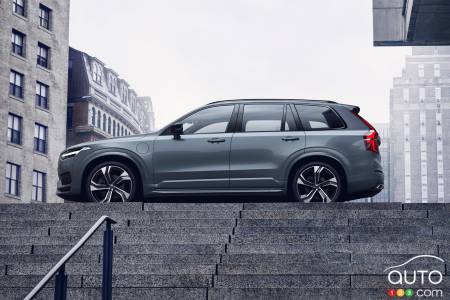 As you can see, the definition of the utility vehicle is as solid as Jell-O out of its bowl. Should an SUV necessarily be built body on frame, wherein the frame is deposited on top of the chassis, like a pickup? That would eliminate a great and increasing number of SUVs – like our two Volvos - that are designed with a unibody configuration, in which frame and chassis are but one.

The advantages of unibody construction are many: the vehicle is lighter (and even more with the use of aluminum and carbon-fibre) and, paradoxically, stiffer (these types of vehicles perform better on collision tests). The lower centre of gravity brings additional benefits, like reduced roll and an aversion to overturning. The body-on-frame structure is now best suited to vehicles that engage in serious towing or do a lot of off-roading, because their design allows for more clearance for the wheels and suspension elements. 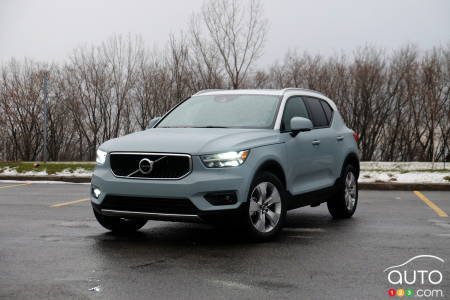 Forget structure, at Volvo the preferred term is platform, a trendier way to designate the skeleton of a vehicle. And so it was that in 2017 the automaker inaugurated the CMA (Compact Modular Architecture) platform. This was a new unibody platform for midsize vehicles developed conjointly by Volvo and Geely, the Chinese auto giant that swallowed up the Swedish company in 2010.

As it happens, the XC40, unveiled in September 2017 (and presented at the Montreal Auto Show in January 2018) was the first vehicle developed using the CMA platform. It was also the very first 5-door luxury compact SUV in Volvo’s history. The CMA platform has been used for the Polestar 2, and for the first vehicles produced by Lynk & Co, a new brand started by Geely. 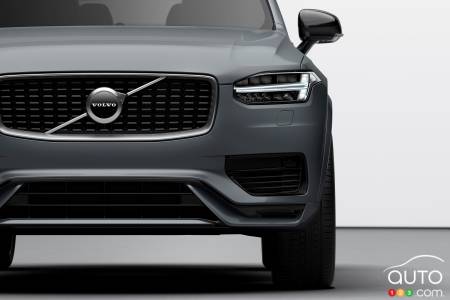 The little XC40 has earned a number of awards, including 2018 European Car of the Year. In 2019 and again this year, the Volvo small SUV beat out all comers to take our own Auto123 title in the Luxury Subcompact SUV of the Year category.

Both generations of the XC90 have been named SUV of the Year by Motor Trend magazine. 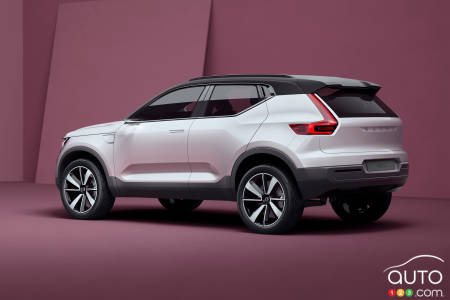 The XC40 first took shape as a concept called the Concept 40.1, conjured up by Thomas Ingenlath and first shown in 2016.

The embryonic version of the XC90 was the Adventure Concept Car, unveiled in 2001 at the Detroit auto show. One year later, in the same locale, Volvo presented the production-version XC90. It was the very first utility model in Volvo history, a departure from its tradition of producing quantity of wagons. 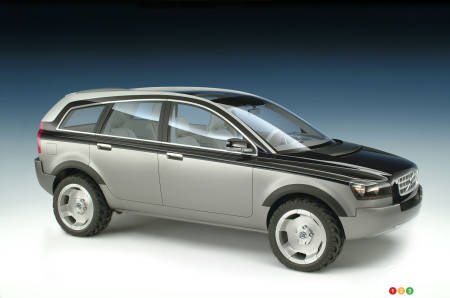 Fun fact: the first-generation XC90 is still produced and sold in China, under the name XC Classic. It’s available with just the one engine choice (a 220-hp, 2.5L 5-cylinder turbo), and the choice of either a manual gearbox or a 5-speed automatic transmission. Unsurprisingly, Geely sells that model for less than the second-generation XC90.

Volvo wanted to simplify things for us consumers, by creating the impression there would now only be a 2.0L 4-cylinder turbo engine lurking under its vehicles’ hoods. The 248-hp version of that mill, baptised the T5, was initially the only unit available to power the XC40.

The 248-hp turbo can also be had in the XC90 but let’s agree that cavalry is too measly for that model to tow anything at all heavy. Luckily you can go for the T6, which adds a turbocompressor, or the T8, which boosts the turbocharger and compressor with a plug-in electric system delivering all-electric range of around 30 km.

Aside from the T5, T6 and T8, the range actually spans T1 to T8 variants, in addition to D1 to D8 versions for the diesel powertrains. But just to widen the range even further, now Volvo/Geely is offering a T4 variant of the XC40, basically a less-powerful version of the T5 that makes 187 hp, still wedded to a Geartronic 8-speed automatic transmission. And remember, the automaker has committed to electrifying all of its models in the coming years.

What was that about simplifying things for consumers?

In Europe, there has been since 2015 a variant of the XC40 called the T5 Twin engine; this is a PHEV fitted with a 1.5L 3-cylinder turbo engine and an electric motor, which together generate a total output of 261 hp and deliver an all-electric range of 50 km. For now, this model is reserved exclusively for the European market.

On the other hand, the 100% electric XC40 Recharge model, unveiled last October, will be sold in our market, hopefully before the end of this year. Based, like the regular XC40, on the Concept 40.1 concept, the Recharge should be able to speed from a stop to 100 km/h in under 5 seconds thanks to its total output of 402 hp (via two electric motors) and squeeze a range of at least 320 km from its 78 kWh battery pack. Which can be recharged to 80% in just 40 minutes, on a quick-charging station.

# 8 They’re the long and the short of it

Here’s where we create the separation between our two Thunder Gray Volvos. To start with, between the big and little brothers, there’s a minimal difference of $22,000 in the base prices. And between the shorter and the longer of the siblings, there’s a 525-mm difference in length (4425 vs 4950) – which works out to $42 per millimetre! 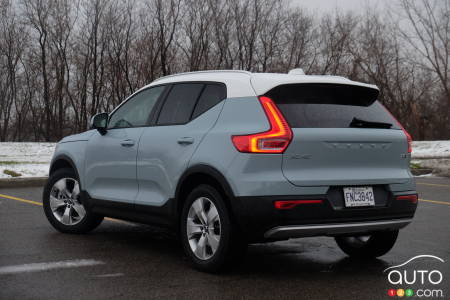 With its greater width (1863 mm to 1923 mm) and height (1652 vs 1776), the XC90 can easily take in six or seven adults, depending on the seating configuration. Meanwhile the fifth occupant of the XC40 will be a pretty unpopular figure due to the rationed space available.

In terms of cargo space? With seats down, it almost feels like you could fit little brother into the trunk of big brother!

# 9 There are gradations of luxury

Size differences aside, the two models come in the same variety of flavours. The base version is called the Momentum. The R-Design is is meant to look sportier, and thus comes shod in exclusive 22-inch wheels. Lastly, the Inscription version is the glam queen of the bunch, decked as it is in Nappa leather, chic wood accents and, of course, the Orrefors crystal ball sitting atop the gear shifter.

Volvo has ever been synonymous with safety. Fittingly, the company has just announced that it is setting a single top-speed limit on all of its new models of 180 km/h starting in 2021. And when you peruse the list of safety functions included in the Intellisafe suite of systems, you can’t help but feel safer at the wheel of a vehicle so well-equipped with advanced drive-assist features.

That said, even when you choose an expensive, range-topping XC90 T8, you’ll need to fork over yet more money to obtain several of these impressive systems. An example is the BLIS system, which reacts when another vehicle is lurking in your blind spot. So, Volvo, a friendly suggestion: make more of these goodies standard, and you will truly cement your reputation for saving lives on our roads.

In the 2020 Volvo XC90 T8 – and in all of the brand’s utility models frankly – the Swedish automaker delivers its own distinct vision of luxury. In its conce...

The Big and the Small Of It: Volvo Looking at Developing ...

Reports indicate that Volvo has added two new SUVs to its plans for the next few years, one at each extremity of its product range. We could see an XC100 wit...