•    The National Transportation Safety Board (NTSB) is concerned about the increased weight of electric vehicles.

•    Data shows that during collisions, occupants of lighter vehicles are at greater risk of injury or death.

•    The 9,000-lb GMC Hummer EV is the most glaring example of what big new EVs represent on the road.

Last week, we shared with you an analysis of a recent development in automotive domain, that is the advent of new, large and heavy electric vehicles, and the two notable dangers that these vehicles pose: Outsized energy consumption and a safety risk on the roads. More specifically, a risk to other motorists, cyclists and pedestrians.

This week, the head of the National Transportation Safety Board (NTSB) in the U.S. expressed concern about the safety risks heavy electric vehicles pose when involved in collisions with lighter vehicles. Jennifer Homendy raised the issue during a speech in Washington to the Transportation Research Board.

“I’m concerned about the increased risk of severe injury and death for all road users from heavier curb weights and increasing size, power, and performance of vehicles on our roads, including electric vehicles.”

The biggest problem right now involves battery weight. And the more range a manufacturer wants to offer, the bigger and heavier the battery has to be. Technological advances will likely attenuate the weight issues over time, but for now, that's a problem. 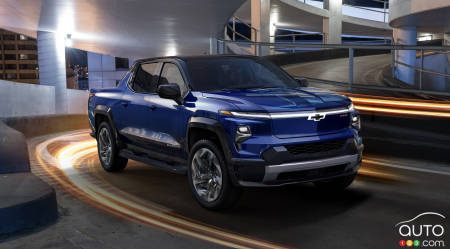 Homendy also pointed a finger at the increased power available from electric vehicles. Immediately available power delivery does create an additional risk, though in principal EVs are not faster on the road; they have to follow the same rules. What we need to watch is the behavior of drivers, especially in urban areas. The ability to accelerate very quickly, silently, can pose an increased risk to pedestrians and cyclists.

The NTSB investigates motor vehicle crashes, but does not have the authority to set regulations. For vehicles, that authority rests largely with the National Highway Traffic Safety Administration (NHTSA), the American equivalent of Transport Canada.

There can be little doubt that that the weight of a vehicle has an impact when it is involved in a collision. A 2011 study by the National Bureau of Economic Research found that being hit by a vehicle weighing an additional 1,000 lb increases the likelihood of being killed by 47 percent.

Big, heavy vehicles, including EVs, are not going to disappear any time soon. The best that can be done at the moment is to educate motorists as they transition to EVs, so that they’ll adapt their on-road behaviour to account for the great weight of their vehicle, and the increased danger they pose.

Production of the GMC Hummer EV SUV Is Underway

Production of the SUV version of the GMC Hummer EV is officially underway at GM’s Factory Zero plant in Michigan. Deliveries should start in late March.

GMC Hummer EV: The Wait Is Now Over Two Years

Those who have an order in for a GMC Hummer EV are being told the wait is over two years. In the wake of the flurry of new all-electric model introductions, ...

GMC is recalling over 700 units of the Hummer EV due to a problem with water seepage in the battery pack. Some units of the BrightDrop Zevo 600 electric van ...