Ultimately, the plant’s future will depend on new models being built there, given the declining popularity of the minivan Automotive columnist: Daniel Rufiange , Updated: 2021-10-20

A few days ago, we reported on Stellantis' decision to cut another shift at its Canadian plant in Windsor, Ontario, where the automaker’s minivans are manufactured. Starting in 2022, that would mean only one shift would be operating.

But this might a be case of Not So Fast. Both the union and Ontario Premier Doug Ford sought to alleviate concerns. According to Automotive News, if you go by their words, today there’s reason to rejoice if you’re a plant worker at the Windsor plant.

Premier Ford said the Stellantis decision may ultimately be “good news” as union leaders and auto industry experts anticipate the eventual return of three shifts at the plant.

"There’s going to be good news at the end of the day. I have confidence,” Ford told reporters gathered in Windsor on Monday.

He said he believes, as do many across the industry, in Stellantis' commitment to modernize the plant and bring in new models to be produced there. 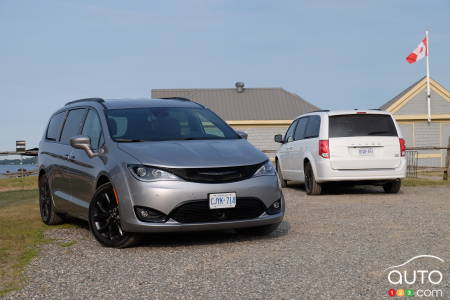 Canadian Auto Workers Union (Unifor) Local 444 President Dave Cassidy told Automotive News Canada that he was “taken aback and shook up” by the automaker's announcement last Friday, but that he “felt a lot better after speaking with the employer” by phone on Monday.

“They’re committed to coming back to three shifts. They’ve committed to product, although we don't know exactly what that is. I hammered them hard on making some type of announcement about where we are because there’s a lot of anxiety out there.”

Part of this is the provincial government and the union saying what they have to and positioning themselves for any potential fight ahead. For its part, Stellantis has so far declined to comment on Premier Ford's or Cassidy's statements.

Recall that during the 2020 contract negotiations with Unifor, Stellantis committed to spending between $1.3 and $1.5 billion to modernize the plant and launch a new “electric or electrified” vehicle by 2024.

That investment, like all the new commitments made by the three U.S. automakers in those negotiations, is contingent on government support.

“The money from the feds and the province is there. The commitment from Canada is there, we need Stellantis to step up and make an announcement and put some people at ease,” said Cassidy. “We know there is product there. We don't know what that product is. I want to make sure they announce that in the real near future.”

Cassidy met with Premier Ford on Monday and received the same assurances the head of the Ontario government gave to reporters later on that day. The premier said his government has set aside “hundreds of millions” of dollars for Stellantis. “They are going to put in a $1.5 billion investment," he added. “We're going to continue to pouring money into the auto sector.”

As for what product will be added to the plant's operations, speculation is rife. However, it could all be tied to the next contract, as the collective agreement expires in 2023.

Toyota gets $100 million from Ontario and Ottawa

Increasing production capacity and creating new jobs in Southern Ontario are part of the deal between Toyota and the governments.

The Costs Associated with EVs Could Lead to Plant Closure...

Stellantis CEO Carlos Tavares is sending a warning in regard to the high cost od developing and producing of electric vehicles. He believes the investments –...