ÅLESUND, Norway – You may have noticed that Land Rover, specialists in all-terrain vehicles for the past seven decades, is currently enjoying a robust renaissance. Much of the credit must surely go to Indian conglomerate Tata, owners of the legendary British brand for nearly a decade now.

The new owners displayed wisdom and intelligence in giving the British engineers and designers enormous latitude as well as significant resources – namely astronomical amounts of money – and reinvesting profits into developing new models instead of filling their pockets. They have bet billions on the success of Land Rover and its sister brand Jaguar, and consumers have proved them right, in all corners of the globe.

A few days after launching the fifth generation of the Discovery for the Land Rover brand, the company unveiled a new model for the ever-chic and chi-chi Range Rover brand. To underline, emphatically, the importance of style and design in its conception, the manufacturer introduced the Velar at the Design Museum in London.

Doing more with less
The svelte new machine was there as a central element of an exhibition dedicated to the theme of “reductionism”, the principle that inspired the designs of its shell and its interior. The idea was to eliminate any element that might distract the eye from the pure beauty of the car’s forms and materials.

This fourth weapon in the Range Rover arsenal slides into the lineup between the much smaller Evoque and the Range Rover Sport, slightly larger but which weighs some 230 kg more. The Velar is built on the same mechanical architecture as the Jaguar F-PACE, which since its launch has been a raging success for the company.

The Velar shares its stable-mate’s aluminum structure and wheelbase, as well as two of the available engines, but’s that’s pretty much where the similarities end. The chassis panels are all different and the cabin is even more distinct. The dashboard, with its minimalist design, near-absence of knobs and two large horizontal touchscreen displays arrayed on the console, comes across like a giant electronic tablet. It is without a doubt one of the most innovative and modern dashboards to feature in a current production vehicle.

The quality and the finishing of the materials – fine leather, satin aluminum, finely textured plastics – are significantly superior to what you get in the F-PACE. The Velar is a Range Rover, after all, and the starting price for the First Edition model, powered by a 3.0L, 375-hp supercharged V6 (the only configuration we tested out) is a hefty $95,000. For those (slightly) more budget-conscious buyers, the starting price for the Velar equipped with a 2.0L 4-cylinder turbo engine (177 hp, but especially 317 lb-ft of torque at 1,500 RPM) is $62,000.

Nature, frigid and grandiose
What better environment for a first date with the Velar and its purified design than the west coast of Norway, where all is luminous and clean? And I’m referring just to the perfectly maintained houses in the towns and villages that dot a tortuous and jagged shoreline, which would stretch to 80,000 km of coarse and compelling coastline if it could be unfolded.

Everywhere else, the roads snake through dense forests and undulating fields surrounded by exceedingly young mountains capped by jagged outlines and that stretch ocean-ward to meet the many immense fjords filled with jade-coloured waters. A large fleet of ferries and a series of magnificent bridges with long, thin curved arches provide links to many of Norway’s roughly 50,000 islands. Even then, for some Norwegians, getting to their cottage requires investing in a big rowboat.

While the Velar has all the comfort and elegance required to take you in first class to the opera in London, Paris or Montreal, it thinks nothing of getting down and dirty on a country backroad, muddy path or mountainside trail.

Although, this last challenge does bring out the most glaring fault to be found with the Velar First Edition: an overly firm ride on rocky, rough or bumpy surfaces. This is especially so if the air suspension has been set in raised position to benefit from the exceptional 9.9-inch (241 mm) ground clearance.

It’s wise at such moments to keep a firm grip on the steering wheel or the passenger handles because things get rock-and-roll when climbing, particularly when bouncing over large rocks. I lay the blame largely on the large 22-inch alloy wheels so beloved by designers, but which wear 275/40R22 tires with very low, rigid flanks. It’s worth looking at other available wheels with more reasonable diameters (say, between 18 and 21 inches) if you value your vertebrae.

The Velar never lacks for power and traction, with a powertrain that can switch from rear-wheel to all-wheel drive in 165 thousandth of a second and transfer torque to the front wheels in 100 thousandth of a second. It’s also possible to choose between six different drive modes (Eco, Comfort, Grass-Gravel-Snow, Mud and Ruts, Sand or Dynamic) via one of the touchscreens.

In the First Edition, the Terrain Response 2 system offers an Auto mode that lets the computers and sensors manage all of the car’s parameters and settings in conjunction with the anti-skid, torque-transfer and rear-differential lock systems. And it works.

Brunch at the summit
The aforementioned large and low tires of the Range Rover Velar First Edition did perform marvellously on the generally smooth roads found in the part of Norway we explored, particularly as the air suspension automatically lowers the vehicle by 10 mm when driving over 105 km/h to reduce aerodynamic drag and fuel consumption. The Velar is stable and stands solidly on its wheels, delivering clean and precise electric steering. It’s also exceedingly quiet, as long as the road surface doesn’t get too rough.

The air suspension also lowers the body by 40 mm to facilitate access. Once in, comfort level in front is impressive, starting with the form-fitting and easily adjustable seats. It’s a little less impressive in back, where larger adults sitting on the outsides may find themselves feeling a little cramped. Space in the middle is itself limited by the fairly high tunnel under which lies the drive shaft.

Back outside, swipe your foot under the rear bumper and like magic the large composite-construction hatchback opens automatically to reveal a very useful 673 litres of cargo space, whose threshold is aluminum. Volume climbs to 1,731 with the 40/20/40-split rear row folded down.

Our road test, which covered over 500 km of roads and trails, culminated in a 2-kilometre climb up a narrow rock-covered trail to the summit of the Strandafjellet ski centre and brunch enjoyed at an altitude of 1,230 metres.

The climb offered a great opportunity to test out the All Terrain Progress Control (ATPC) system, which allows the driver to choose a speed (anywhere from 4 to 30 km/h), and let the electronic system do the rest. The Velar valiantly kept the pace, and we enjoyed the sounds of the enthusiastic, muscular V6 working in perfect tandem with the 8-speed ZF transmission. Later, on the descent via a narrow, winding road that offered a great view of the spectacular Geiranger fjord, the Hill Descent Control system took over.

The Velar in short
Marvellously elegant and comfortable, not to mention stable and solid, the 2018 Range Rover Velar is the perfect fourth tool for Range Rover to be adding to its toolbox. With its purified styling and innovative design, it does much more than simply fill a hole in the prestige automaker’s lineup. It opens up new trails and possibilities; chances are it will start some trends within the industry, perhaps as soon as this September.

To learn more about the automaker’s ground-breaking approach to auto design as exemplified by the new Velar, check out our interview with Land Rover’s head of design, Gerry McGovern. 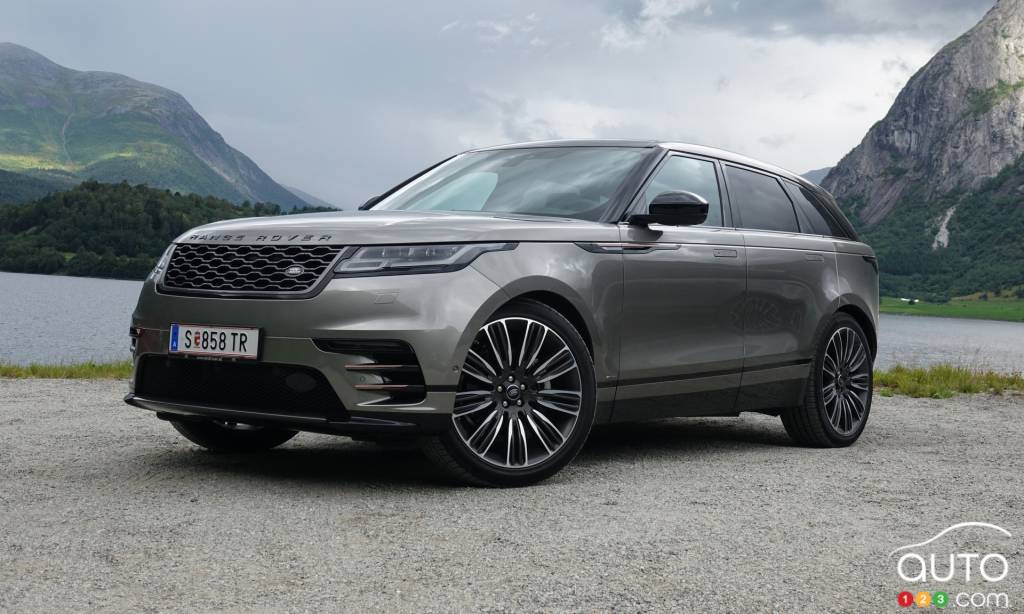 2018 saw an SUV, once again, come out ahead when the World Car of the Year awards were handed out in New York this week. The Volvo XC60 is this year’s overal...