Santa Barbara, CA – No contest, the winding roads of California are the best possible place to test out the driving dynamics of cars. The canyon roads offer not only spectacular views, but also changes in elevation and challenging curves for any type of vehicle. Those challenges did not dissuade Nissan from putting on the launch of its new 2019 Altima in the heart of California – on the contrary.

The challenge, commercially speaking, is great for the midsize sedan now entering its 6th generation. For one, because the segment it’s in is in freefall, and competition is all the more ferocious for it. You could also go so far as to say that the category contains the best cars on the market, across all segments.

All-wheel drive!
Nissan does have a secret weapon up its sleeve with its Altima sedan: the 2019 edition is now offered with all-wheel drive, becoming one of the rare models in its class to do so. Given the love Canadian motorists in particular feel for this type of drivetrain, you can see why the automaker is adopting this strategy – and is so bullish about the Altima’s prospects.

A new incarnation
Don’t look too hard, in the 2019 Nissan Altima, for any kind of connection to the previous generation. Yes, there was a desire to retain the basic personality of the car, a mix of family-friendly and sporty appeal, but this edition has been reworked top to bottom. 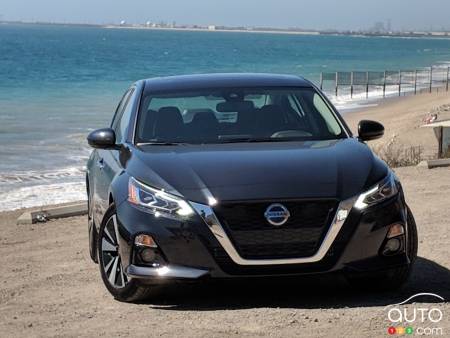 Visually, resemblances with other members of the Nissan family are unmistakable. There’s the V-shaped front grille that now adorns all of the brand’s vehicles, and there are a number of familiar-looking contour elements. While it’s true that the overall shape is inspired by the VMotion 2.0 concept seen at several auto shows, the final result is notable less dramatic, even as design incorporates elements collected from several design studios following an international-scale competition.

Does it work? Absolutely; the Altima possesses an undeniable charm. But again, it’s all significantly less extreme than the concept version. This is all to the good as it allows the sedan to go to war in its competitive segment on an even footing.

The most successful aspect of the 2019 Altima, however, is its interior. Here, the basic recipe of successful ergonomics has been followed, but with the addition of some extra spices. The quality of the materials is excellent, noticeably better than in previous generations. The very design of the dashboards and its display dials makes reading them more pleasant, and the presence of a screen surrounded by dials allows for improved visibility of all the different elements.

As for the central console, it is largely decluttered thanks to the presence of a highly placed larger touchscreen display located right in the middle of the vehicle. The physical buttons are thus placed higher up and are easier to use, from the driver’s position but also from the front passenger’s seat.

Another small detail: as usual Nissan places redundant commands on the steering wheel itself, making those functions even easier to use. 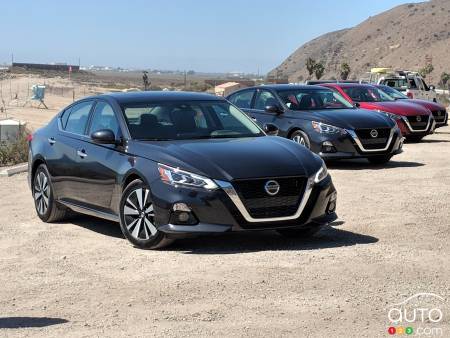 One engine, one power output
American consumers get a 2.0L 4-cylinder turbo engine with variable compression in their Altima; this unit was actually developed by INFINITI for its QX50. In Canada, however, we’ll be “settling” for a 2.5L 4-cylinder, a familiar-sounding engine but one that has actually been heavily reworked in comparison with the current one.

Concretely, the new engine is lighter and has been redesigned by moving some elements, ensuring improved stability and fewer vibrations.

The engine combines with an intelligent all-wheel drive system, the on-demand electronic management of which allows for transferring up to 50% of power to the rear wheels in conditions where road grip is extremely compromised, or 40% during mildly more dynamic driving that asks more of the wheels. In Normal mode, in order to maximize fuel economy, the Nissan Altima works in a front-wheel drive configuration.

To transmit the engine’s power to the wheels, the midsize sedan counts on a continuously variable transmission (CVT0 with simulated gears that reacts easily and quickly. In fact, this new version of Nissan’s CVT is more transparent than previous iterations; with the exception of some rapid shifts when the driving is more dynamic, it keeps pace without any trouble.

This dynamic driving of the Altima is solidly supported by exclusive new rear shock suspensions, inspired by those in the Maxima, but fine-tuned to enhance comfort levels. The chassis itself is at once lighter and stiffer, by 10% in lateral torsion, thanks in part to the use of high-density steel. 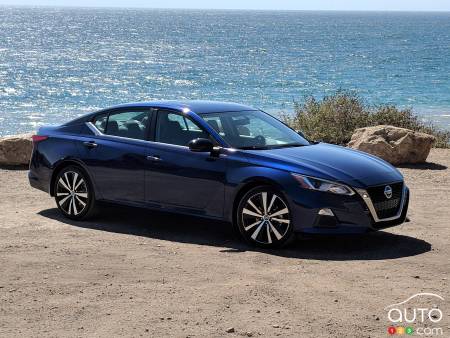 Then there’s the more-dynamic steering system, the design of which ensures more direct and communicative responses. This we were able to test, without pushing things too much of course, on some of California’s most rugged roads. The minimal roll of the car, as well as its precise steering, allows the driver to anticipate the movements the Altima will make and thus set the right trajectory. In other words, even when pushed beyond what is totally reasonable, the car proved to be predictable and stable. Although, maybe not quite as sporty as we would have hoped.

A safe sedan
It’s impossible to imagine putting together a sedan of this type without including in the type of safety features that families are looking for. They are, after all, the 2019 Nissan Altima’s primary target market.

So as you’d expect, Nissan has expanded its offer by adding to the Altima’s catalogue Pro Pilot Assist, already present on other models in the lineup. This package of systems includes intelligent cruise control, which is able to independently maintain the car in a straight line without the driver’s intervention under certain conditions.

The automaker also added Nissan Safety Shield 360, a range of advanced electronic systems that regroup functions like lane keep assist, automatic braking assist, blind spot detection and reverse braking assist. Also present is traffic sign recognition, by which the navigation system displays the current speed limit, and can detect driver fatigue and warn them to stop before an accident occurs. 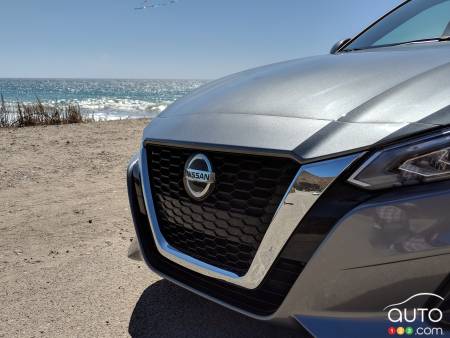 The lineup of the 2019 Nissan Altima includes three versions (four if you include the very limited Edition One, which comes with its own unique wheels and a few esthetic changes). The three are the S (starting price of $27,998), the SV ($31,498) and the Platinum. This is actually a new appellation, and it regroups and the available options packages. It goes for $34,998.

Conclusion
With its new styling, comfortable seats (the Altima retains but improves on its existing NASA-inspired Zero Gravity seats) and all-wheel drive, Nissan’s midsize sedan certainly has some compelling features, and represents a clear progression compared to the older-generation Altima.

But as we mentioned, completion in the segment is ferocious, and in the Toyota Camry and the Honda Accord, for example, the new Altima is up against some daunting rivals. That said, the remade 2019 edition certainly has the weapons to go to war, and could well conquer some consumers who had in recent years stayed away from the model. 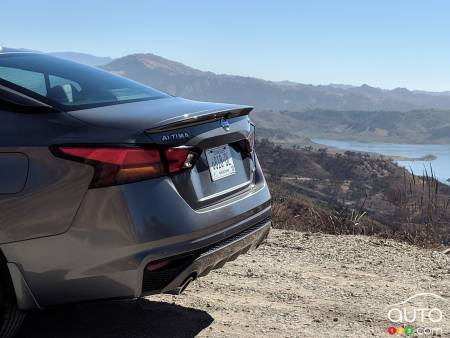 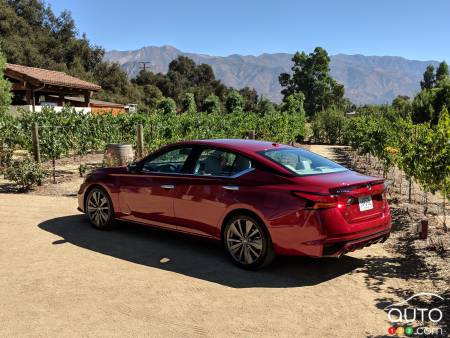 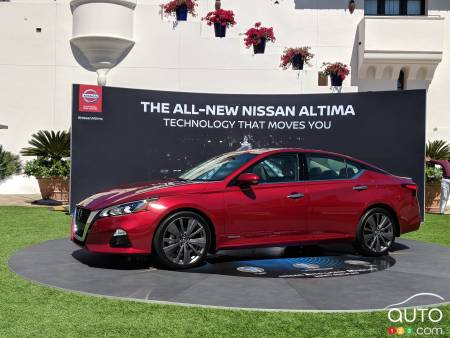 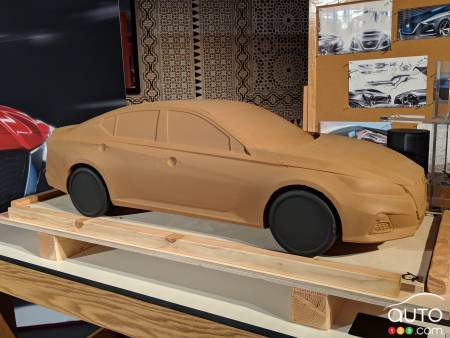 How to choose between the 2019 Toyota Camry and 2019 Nissan Altima, between the master and the apprentice? Auto123.com compares the midsize sedans that once ...