The Dodge Challenger celebrates its 50th anniversary this year. And yet, the oldest muscle car on the market - and I'm talking not about its age as an existing design concept, the Challenger name having first taken flight in 1970, but the modern Challenger that first hit our roads in 2008 - is in better shape than ever before. In fact, in the third quarter of this year, the Challenger even outsold its two big rivals south of the border - though it didn’t accomplish that here, Canadians having preferred both the Ford Mustang and Chevrolet Camaro to the Dodge.

So yes, the current Challenger is old - it's been around since 2008 after all - but Dodge is to be commended for keeping the public interested in the only coupe still in its lineup, and doing it mainly by offering countless different variants since its return to the scene over a decade ago.

Over the years, I've been able to test drive several versions of the Challenger as well as some of the models those variants compete with, and I must confess that when I come back to the Challenger, it’s with a big smile on my face. My latest encounter was with a model that sits halfway in the product offering between a Challenger SXT at $29,395 and the beastiest Challenger, the SRT Hellcat Redeye Widebody at $97,745; both prices are before fees.

The sweet spot
While it's true that the most-powerful Challenger in the lineup looks pretty irresistible with its supercharged 797-hp V8 (yikes!) and widened hips, the asking price is pretty dizzying, especially since driving an 800-hp beast day-to-day is really no picnic. It’s a different story with the 2020 Challenger R/T Scat Pack that I was given to play with this autumn.

In any case, with its naturally aspirated 6.4L V8 engine delivering 485 hp and 475 lb-ft of torque under my right foot and the cooled road surfaces underfoot at this time of year, even this version of the Challenger – which hits the sweet spot for the model as far as I‘m concerned - can give drivers a hard time. Let's just say it wasn't too difficult to get the rear tires spinning.

Morning fresh air filled the big HEMI V8 through the cold air intake that replaces the usual gearbox, courtesy of the optional Shaker package, which is impossible to miss with that "bump" in the centre of the hood. Those familiar with the American brand may have recognized the bees stuck to the front fenders or even the matte black spoiler at the end of the trunk, which is even tattooed with the words "Scat Pack". Overall, the Challenger still looks great, even after all this time.

The sweet spot I refer to is also about finding the right balance between the outsized performance of a car able to excel on the track, and its practicality in daily use. Yes, it's true that very few owners of a V8-equipped Challenger use their car in the winter, but the American coupe has everything needed to be practical car during the warmer months of the year. The Challenger is relatively comfortable, especially with those big, soft bucket seats, and just as comfy back-row seats. Speaking of comfort, I should mention that the muscle car suspension is on the firm side of the hard-soft divide, and that's quite apparent when the you’re on a road surface that’s seen better days.

The good news is that FCA's two-pedal transmission is perfectly suited to this type of car, plus the efficiency of its transmission supersedes straight-line manual versions; the automatic transmission computer is superior to any experienced driver... in most cases! Note that it is possible to change the gear ratios yourself using the paddles mounted on the back of the steering wheel, although their size is not optimal in my humble opinion. Another element that’s not quite right, size-wise, is the steering wheel. Dodge has improved things in this area, but there is still room to make for better handling.

The presence of the automatic transmission also has an impact on the fuel consumption of the vehicle, although in reality, that argument doesn't really come into play here. With the automatic transmission, the HEMI V8 engine can operate on four cylinders when the situation permits. In fact, the switch to economy mode can be heard, with the engine emitting an uninspiring twitter all the sorrier for being constantly compared to the musicality of the V8 when in full function.

The last word
The bottom line with the 2020 Dodge Challenger R/T Scat Pack 2020 is that it does, in fact, plaster a smile on the user’s face. The fun starts right away when the HEMI V8 lights up and continues until you pull into your driveway…. until the next excuse for taking it out presents itself!

The act of acquiring of such a car is a thing of passion above all else. Even if it relatively comfortable, the Challenger is not the most practical car you could stick in your garage.  Fuel consumption is that of a muscle car (meaning, greedy) and comfort levels can suffer when the road gets rough. But all these inconveniences are quickly forgotten when you take the time to appreciate for what it is this muscle car inspired by a golden age long past. 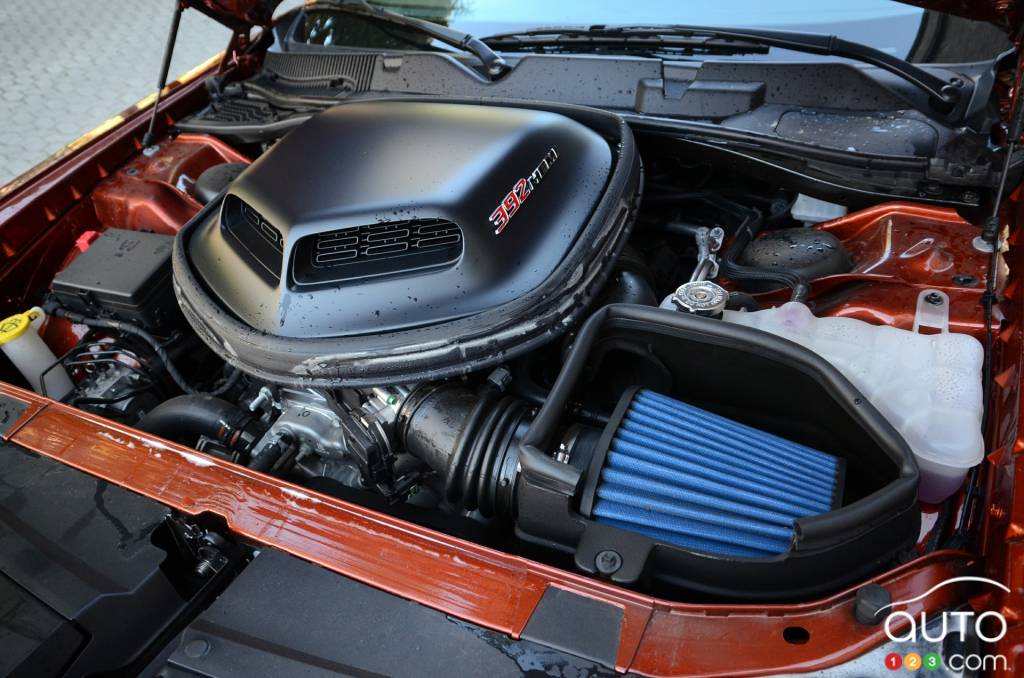 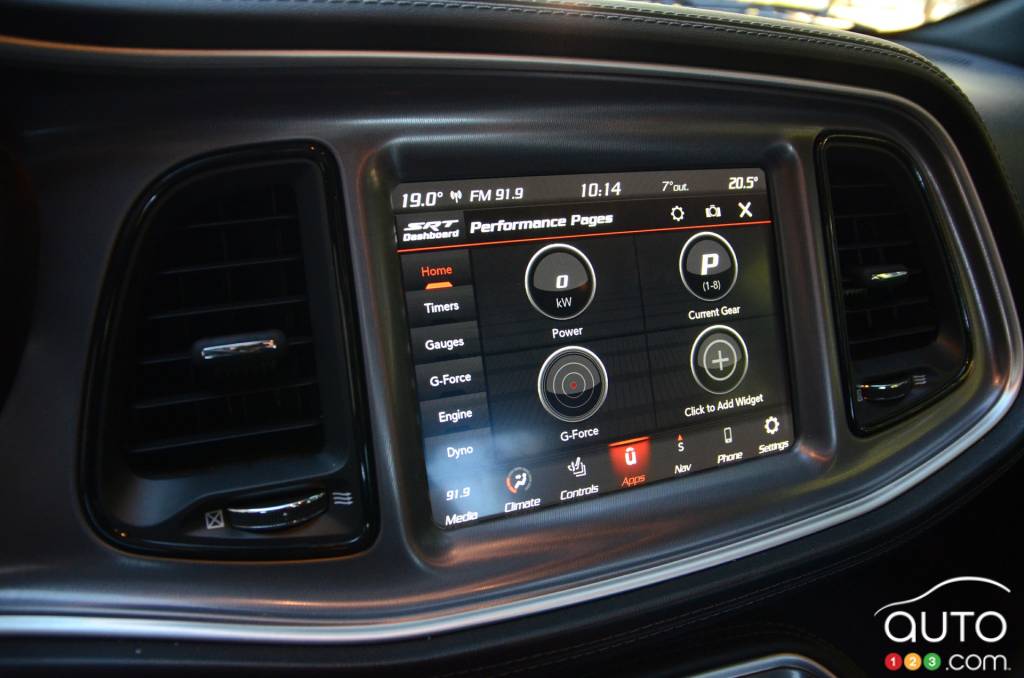 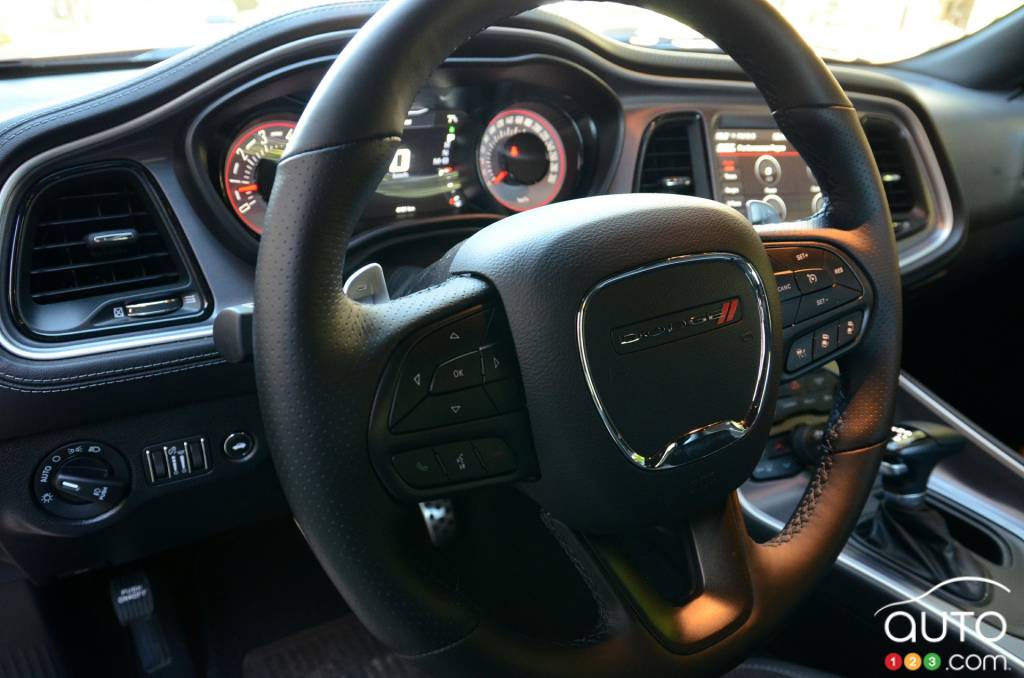 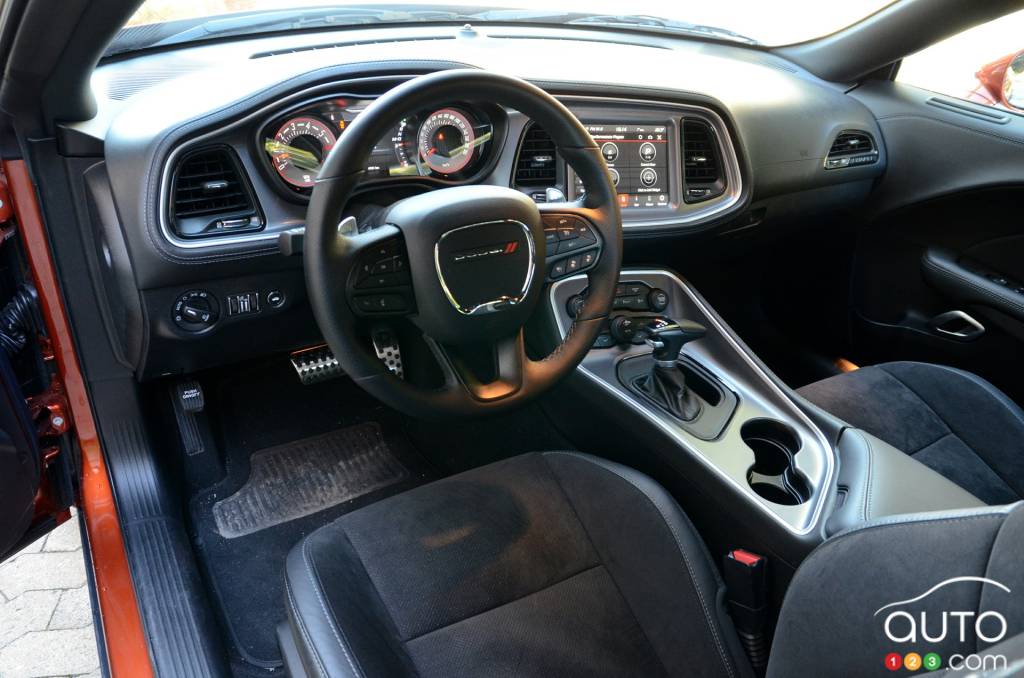