Are you interested in purchasing a Nissan Rogue, but want something that’s still a Nissan CUV but just  not one everyone else is driving around in?  Something just a little more unique, but with most of the good stuff that makes the Rogue such a huge seller?

Well then look no further because the Qashqai may be just the ticket. Seem like a lot? Maybe, but you can easily flip down the seats without having to remove the headrests no matter how far back the front seat is. Plus, those awesome Zero Gravity seats are present and for the most part, Nissan has made good use of the space inside. This is not a vehicle that would feel that much smaller than its bigger sibling if you were to sample one after the other.

Inside
Taking your seat behind the wheel reveals an airy cockpit, a great view forward and a well-laid-out dash, although to be honest it isn’t the most exciting to look at. The gauge fonts are clear but unadventurous (though there is a full-colour digital display between them for your trip computer and driver aid functions), the centre stack is a straight-laced affair with buttons aligned as you’d expect and there’s even a flat-bottomed steering wheel. That’s a nice touch, if a somewhat superfluous one. 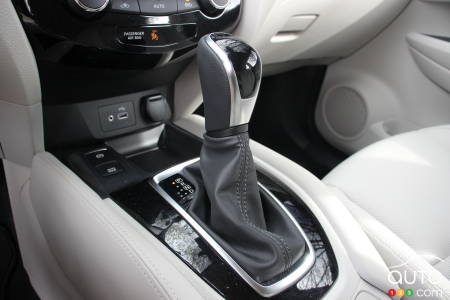 Its sober feel contrasts with the exterior styling, which is modern and somewhat squatter and more athletic than what you get with the Rogue, what with its shorter wheelbase and overall length. The lines are punctuated on my SL Premium tester by great 18-inch wheels, sharp Caspian Blue paint (you can also get wilder stuff like Monarch Orange, Scarlett Red and my personal favourite – Nitro Lime), though you do pay a premium for some of the more specialized colours.

The tech
The wheels are the big hit, though, and you really don’t want to clip them on a curb; that’s made easier to avoid by the Around View monitor that not only gives you a rear view as you park, but a top-down one as well as one just above the front right wheel so you can line it up within inches of the curb. Glorious, and while it’s a little lo-res and the screen could use an extra inch of real estate, it’s a feature I used often, both while reversing – where it automatically activates – and manoeuvring in tight spaces as you can activate the camera with a simple press of a button mounted to the right of the display. Right on. 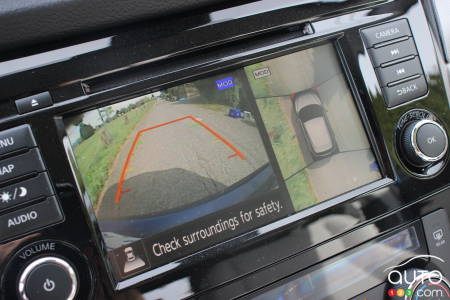 The display is also your home for Apple CarPlay and Android Auto, both fitted as standard on all Qashqais. The software worked flawlessly for me; it was more the hardware that I took issue with. Mainly, I speak of the need to store my iPhone in a cupholder because the slot ahead of the armrest is too shallow so the phone would often fall out, and the pad at the base of the centre stack too square to really use. The Qashqai’s Sentra compact sedan sibling has a fantastic grippy pad just ahead of the gearlever; why can’t the Qashqai?

I also take issue with the controls for the drive modes, heated steering wheel, traction control and lane keep assist. They’re mounted in a button bank down by the driver’s left knee, and are obstructed by the left-hand wheel spoke when pointed straight ahead. Which is an issue, because it’s when you’re on the straight and narrow that you’ll want to be adjusting all this, not when you’re turning the wheel as you wind up the gravel path to the cottage.

Those are the only real niggles I have with the interior, though; the rest is spot on and the Qashqai is a relaxing place in which to sit. On the road
That’s a feeling that’s reflected in the ride. Harsh bumps don’t send shivers through the steering wheel (or your spine), which means you won’t have the wheel writhing in your hands as you hit bumps on the road. Wind noise is tame, and even with those big wheels, road noise is reduced.

I also detected little body roll, surprising considering how smoothly the Qashqai rides in most circumstances. I expected that comfortable ride to become an overly squishy one as the turns increased, but I did not find that to be the case. The chassis is well-tuned to keep the body in check, and while steering is responsive, there’s enough of an off-centre deadzone so that you’re not left constantly correcting to keep things on the straight and narrow while on the highway.

Of course, if you’d rather the computers take on more of the mundane chores, the Qashqai comes equipped with the whole shooting match when it comes to driver aids: active lane-keep assist (whose levels of intervention can be adjusted), rear cross-traffic alert, forward collision alert, blind spot warning system and adaptive cruise control.

Many of these can be switched on or off through a menu activated by simply pressing a button on the right spoke of the wheel. It’s a proper amount of kit that I was properly happy to see considering the cost of my fully-loaded SL Premium tester stayed below the $35,000 mark. 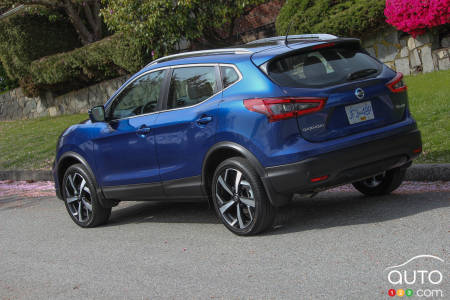 The mechanics
You will be shaken back to reality eventually, though, and pretty much all the blame can be laid at the feet of the continuously variable automatic transmission (CVT). These transmission types tend to be whiny, and the Qashqai’s is no different – that drone is pretty much ever-present, and it’s too bad because otherwise, the powertrain isn’t bad.

Power from the 2.0L four-cylinder is rated at 149 hp and 141 lb-ft of torque (both figures are down 30 on the Rogue), fed to the front wheels in normal circumstances and split to the rears if the fronts begin to lose their purchase. Those figures are enough to get the Qashqai up and running in a decent amount of time, even more so if you’ve selected Sport mode. That improves throttle response and asks the transmission to loosen the reigns a little, so you get a little more zip befitting of the Qashqai’s athletic looks. I can honestly say that aside from the moan-y transmission, I took little issue with the Qashqai’s performance both on the highway and in city. In fact, I took little issue with the Qashqai at all. It manages to navigate the somewhat clumsy confines of Nissan Canada’s SUV/CUV lineup and carve out a bit of a niche for itself, one that should be attractive to younger families looking for something comfortable, sure, but also something cool and, above all, affordable. The Qashqai ticks all those boxes and then some and as a result, I have no problem recommending it as a valid alternative to the hot-selling Rogue. 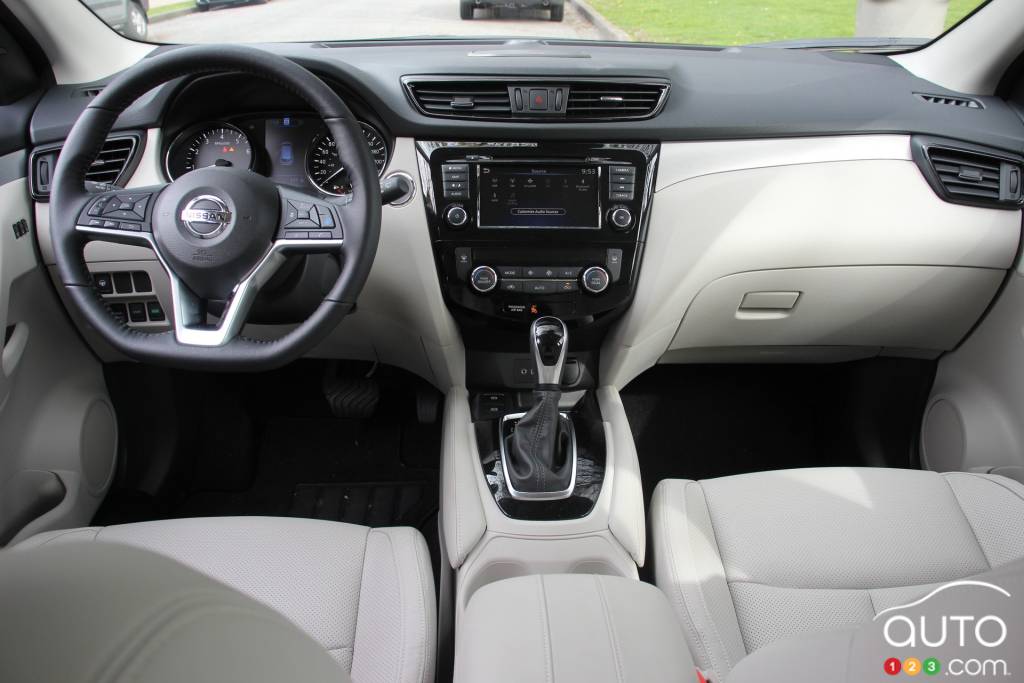 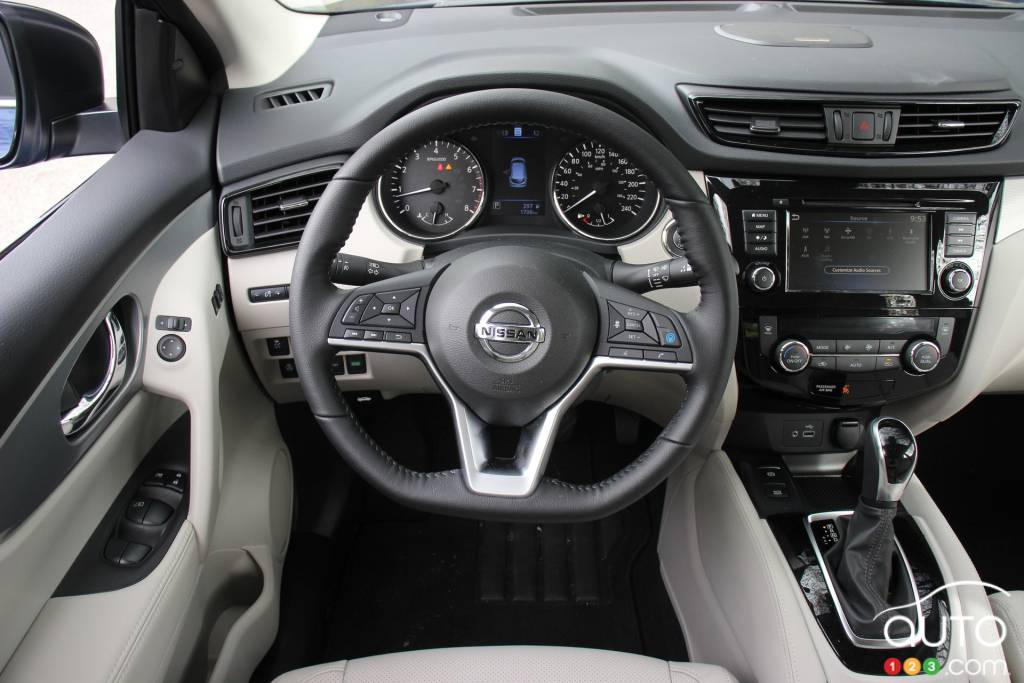 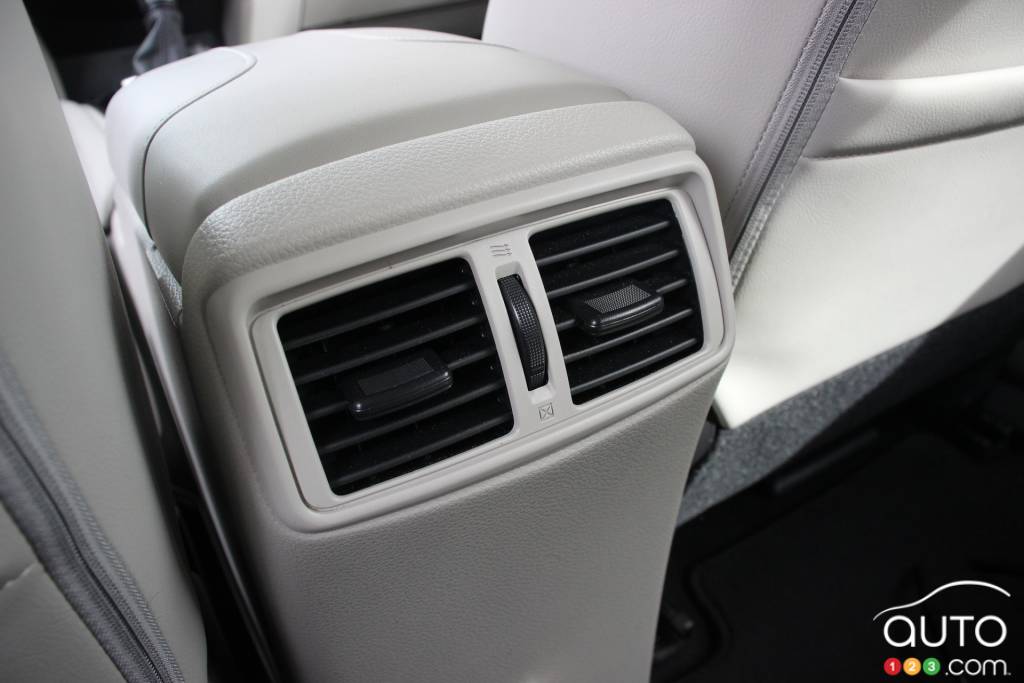 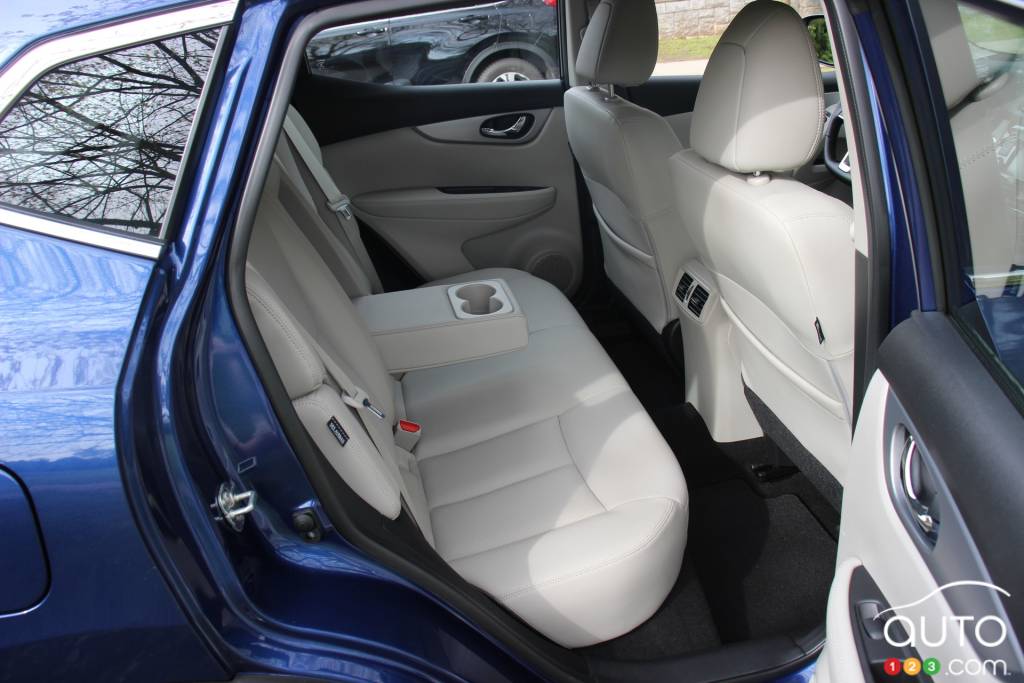 Nissan Introduces an Improved Qashqai for 2020

Nissan Canada has announced details of the changes being brought to its Qashqai SUV for the 2020 model-year. The model gets slight price increases across the...

The restyled 2020 Nissan Qashqai (known as Rogue Sport in the U.S.) makes its debut appearance at the 2019 Chicago Auto Show. Highlights include a revised fr...