Auto123 puts the 2020 Subaru Crosstrek to the test

Japanese manufacturer Subaru has made it one of its trademarks: match the shell of a wagon with the "go anywhere" capability of an SUV. This concept, borrowed from the AMC brand that marketed some of its models under the acronym Eagle in the early 1980s, first appeared in 1993 (for the 1994 model-year) with the Subaru Legacy Outback.

The idea has come a long way since then, to the point where the elevated wagon has even driven the Legacy wagon that was its first incarnation out of the lineup. The Impreza Sport, renamed the Impreza Outback in the early 2000s, was finally sidelined as well in 2013 when Subaru placed its new XV Crosstrek in the pocket crossover segment. Since then, the model now known as the Crosstrek has been an unmitigated success story for the Japanese automaker – and nowhere more so than in Canada.

I was recently able to test out a Limited trim of the 2020 Subaru Crosstrek. Here's what I took away from a week with the most expensive Crosstrek in the lineup, if you discount the new PHEV version that sells for more.

The look, or the $2,200 question
Since the Subaru Crosstrek is based on a five-door Impreza architecture, a comparison with the compact car is inevitable. A quick look at the Subaru catalogue reveals that the Impreza Sport-tech with EyeSight (the most fully equipped version) costs $31,695. In comparison, the most expensive Crosstrek requires an additional $2,200 or $33,895. For some reason, preparation fees are more expensive for the crossover than for the Impreza. Go figure…

Regardless of the price differential, the Crosstrek benefits from a more versatile ground clearance to get over snowbanks and such. It gives drivers 90 mm more room to play with than the Impreza, which is no small feat. Add to that the exclusive wheels (18-inch in this case) wrapped with more aggressive tires, black plastic rocker panels and a roof rack that's likely to be dressed up with a basket, cargo box or even a bike, kayak or snowboard.

And though this is a matter of personal taste, I must admit that I'm one of those who like this raised car approach. Given the sales figures for the Crosstrek in Canada the past few years, I'm not alone. Plus, hats off to the designers for offering a slightly sprightlier colour palette here than some of the models the Crosstrek competes with. 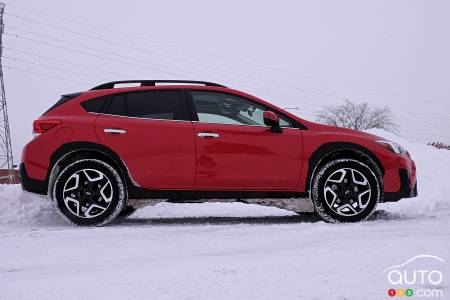 The same engine as the Impreza, but...
No change here, as for 2020 buyers get the same 2.0L flat 4-cylinder engine powering the SUV. With 152 hp and 145 lb-ft of torque at its disposal, this unit doesn’t exactly make of the Crosstrek a roadrunner, far from it. On the Limited edition with EyeSight, the continuously variable transmission is standard (the suite of safety features is not available in tandem with the  manual transmission). That CVT frankly turns accelerations into a festival of decibels. As for the all-wheel drive system, it’s probably not even worth explaining the brand’s approach to that feature (which is, include it all the time in every model and every trim).

For now, Subaru Canada has yet to follow the decision by its American counterpart to add another mechanical option to the model's catalogue for 2021. U.S. consumers will be able to opt for the 182-hp 2.5L 182-hp engine currently in use in the Legacy, among other places. At present, only the new plug-in hybrid option is offered as an alternative to the outdated 2.0L naturally-aspirated model, but that is a much more expensive choice. 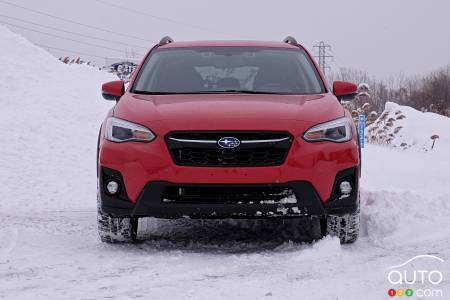 An improved drive?
While the Crosstrek is no muscle car, this small wagon perched 90 mm higher on its wheels does deliver a positive driving experience. Behind the wheel, you can feel the rigidity of the chassis, which makes for a reassuring ride. The extra-wide steering wheel is pleasant to hold and provides the driver with an acceptable amount of feedback. As is the case with many other Subaru models, the steering is quite heavy. While its precision isn't as surgical as the WRX STI's, the crossover's mission isn't to deliver performance, so it’s an apples-and-oranges comparison. The suspension is fairly firm as well, though not so much that it makes the vehicle uncomfortable.

Really, what's still missing from this wagon-SUV mix is just a little more pep under the hood. Acceleration is a pain, especially if the driver jams the right pedal to the floor in one fell swoop. To add a little more muscle to the sprint, it does help to select the S mode of the Si-Drive system, which is accessed via button on the steering wheel. The S mode is more direct and almost gives the impression of inflating the mechanics' statistics.

As for the all-wheel drive system, it once again proved its efficiency during this late-winter test run in La Belle Province. Less aggressive than in the WRX STI, it still stands out from other systems by the simple fact that the all-wheel drive is always in use. 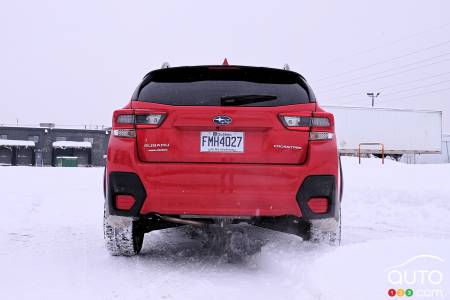 The last word
It's no fluke that little crossovers like this are popular these days. First of all, they are more versatile than compact cars, mainly because of the improved ground clearance, but also because of the all-wheel-drive configuration. You could fault the Subaru Crosstrek for the laziness of its design, but its very simplicity - and familiarity - explains in large part why so many of the brand's fans stay so loyal to it.

As for the quality of workmanship, it's very much in line with what Subaru has been delivering for several years: the materials are generally well-made and you can feel that the vehicle will stand the test of time, both inside and out. No doubt a few horses are missing between the two front wheels, but most people who opt for this vehicle don't care. This smaller-scale Subaru Outback holds its own versus its bigger sibling, except for the reduced cargo volume. In my opinion, it's one of the best in its class. If you’re in the market for a pocket-sized SUV, it's worth at least a test drive – when it becomes possible to do those again! 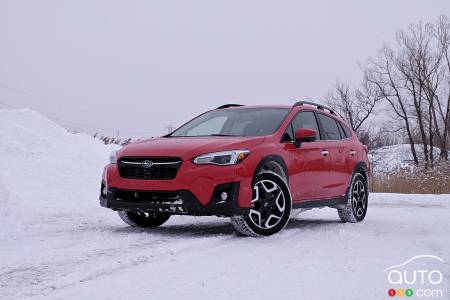 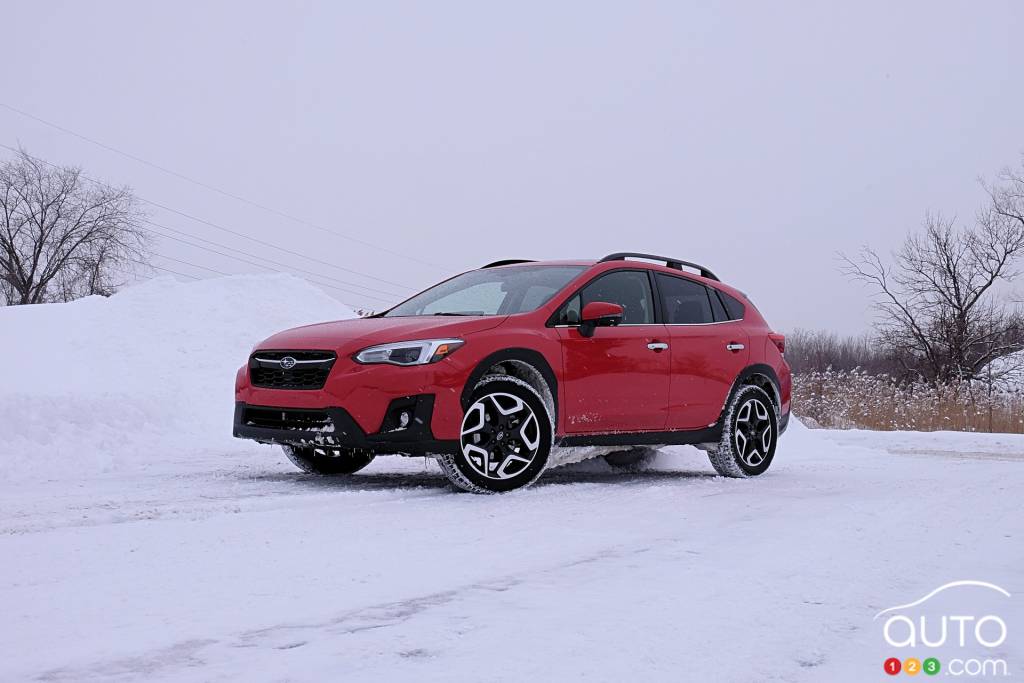 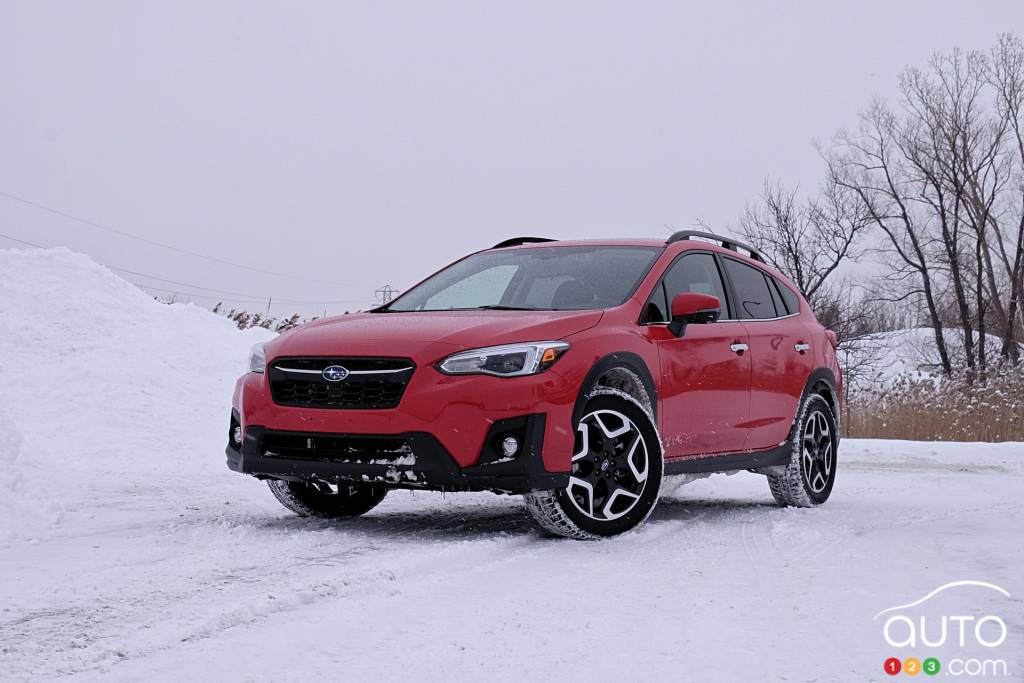 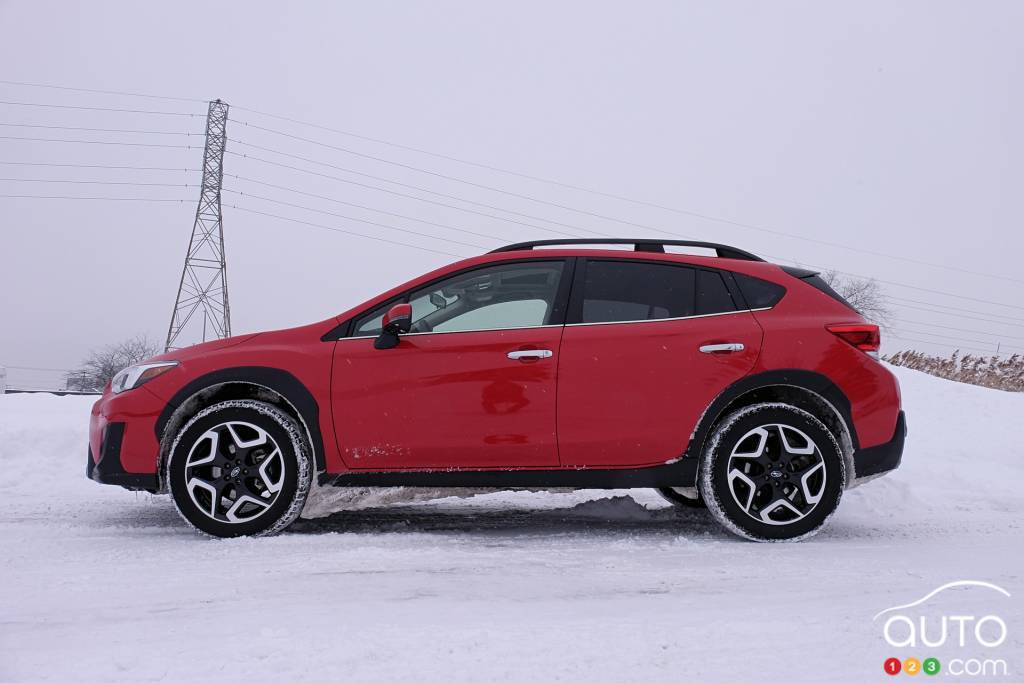 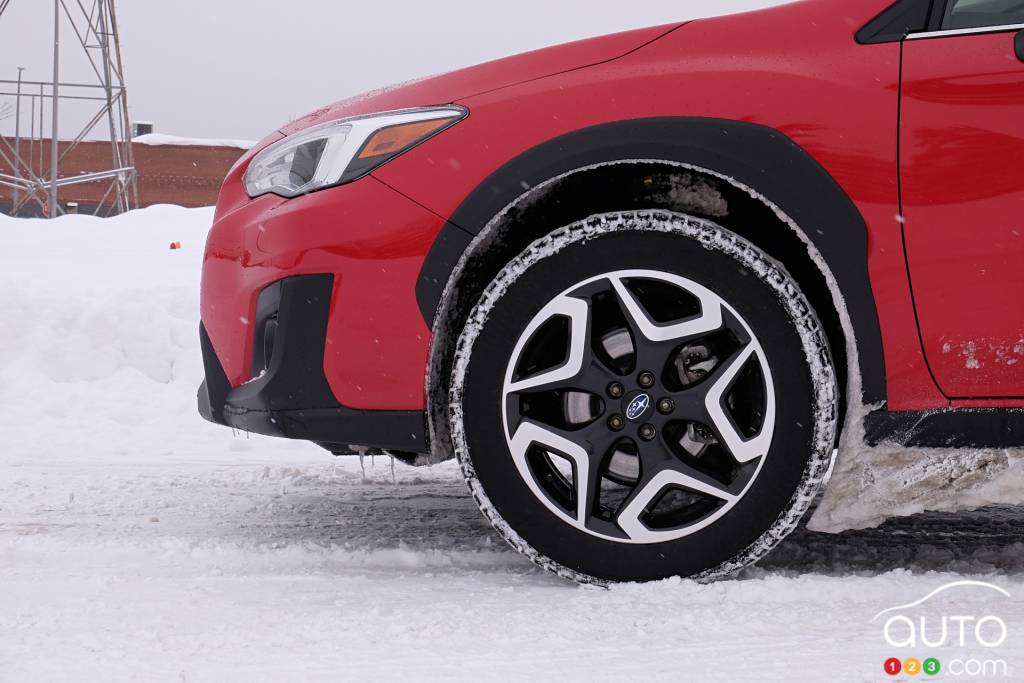 Winter? Bring it on! Once again Auto123.com brings you our updated ranking of the Top 10 most affordable all-wheel-drive vehicles sold in Canada in 2020.

The 2020 Subaru Crosstrek gets more features included as standard, all while Subaru holds the line on pricing - for a third year running. Auto123 has the pri...