The clock is ticking on Toyota if it wants to remain – or get – relevant in the segment Automotive columnist: Vincent Aubé , Updated: 2020-09-15

As I began my test drive of this big Japanese 4x4, my mind wandered inevitably back to an event 12 years past. The day after press day at the 2008 Detroit Auto Show, Toyota Canada invited a gaggle of automotive columnists - at a time when the word "influencer" wasn't even part of the vernacular yet - to discover four new models in the Motor City: the Toyota Corolla and its cousin the Matrix, the Lexus LX570 ... and the largest Toyota SUV ever released in North America, the Sequoia. At the time, the big SUV was fighting the good fight versus the other pachyderms on the market. The model is still with us today, but there’s no getting around the reality that in the interim, much has changed in the automotive domain!

To put things in perspective, the Toyota Sequoia that first launched in 2001 received an update for that 2008 model year. Since then, though, nothing - absolutely nothing - has been done to the imposing vehicle, except for a discreet redesign in 2018, the highlight of which was a reshaped headlamp signature.

Meanwhile across the street at General Motors, that company’s large SUVs (Chevrolet Tahoe/GMC Yukon/Cadillac Escalade) were modernized twice, in 2006 and again in 2014. And in case you didn't know, GM's big SUVs are all shiny and new again for the 2021 model-year.

Back to 2020, twelve years later: I had occasion to get back behind the wheel of the good old Sequoia, more specifically a TRD Pro trim. Not in the Windsor area (across from Detroit) as in 2008, but in the Montreal region, in the dog days of summer. Here are the results of my test drive of a little-loved SUV that has been selling by dribs and drabs in Canada since its debuted back at the turn of the century. 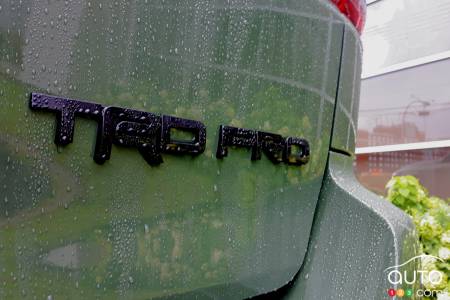 The TRD Pro package
With its Khaki Green colour (exclusive to the TRD Pro package), the Toyota Sequoia is certainly more eye-catching; also helping are the addition of the retro grille with its T-O-Y-O-T-A lettering, BBS wheels and  the roof rack exclusive to this trim. Though to be honest, apart from a few curious pedestrians, I mostly drew attention from 4x4 drivers curious about the identity of this extremely rare Toyota 4x4. Also worth noting with the TRD Pro are Rigid Industries fog lights, housed in the front bumper, as well as protective plates under the vehicle, which are flanked by a red TRD logo.

Despite the cosmetic treatment, the old Sequoia doesn't compare favorably with the newer Detroit models or even with the newer Nissan Armada. Let's just say the model is really starting to show its age.  That said, I didn't notice anything untoward in terms of assembly quality.  Though of course, after 12 years of manufacturing a product virtually unchanged, you’d better hope the manufacturer has all the kinks worked out!

A vintage 2000s interior
Toyota's decision not to renew its large 4x4 is justified by the very limited audience for this type of truck. Ford and GM share the two largest shares of the segment. Hence, the interior environment of the Sequoia has absolutely nothing to do with those of Toyota’s other, more-modern models.

The hard plastic dashboard, complete with a few misaligned panels, is truly from another era. The size of the central-console touchscreen is exhibit number two, followed by some of the buttons that date back to the last century. That is not an exaggeration. Making matters worse, the button for the audio system volume is too small, while the button for changing stations is too far from the driver.

There's no shortage of storage space inside the big Sequoia, though, from the centre console to the door baskets, not to mention the rear armrests where my boys were able to hide their latest Lego creations without my knowledge.

Ground clearance being what it must be for a 4x4 like this, entry into the Sequoia is tricky, but made easier by the steps on the back. Getting into the third row isn't as easy, however, which is surprising given the Sequoia's generous interior space. What’s more, when the third row of seats is in place, the available volume is frankly disappointing. Fortunately, once it's folded into the floor, you can buy a month's worth of groceries in one shot. Note, however, that the step is high for loading heavy objects; this is the case for all these large 4x4s based on a ladder chassis.

An outdated transmission
I can't really fault Toyota's decision-makers for their choice of a powertrain; the big Sequoia has to rely on a good old V8 to get around. True, the Ford Expedition comes with a twin-turbo V6, while GM's newest generation of 4x4s can be ordered with a turbocharged V6, but in this niche, a V8 engine is still required. The catch with Toyota's naturally aspirated 5.7L V8 is that it's mated to a 6-speed automatic transmission. In short, unless you're super gentle with the right pedal, the big truck has a hard time maintaining a fuel consumption average below 17.0L/100 km, and this when only two out of four wheels are used.

Powertrain performance, however, is not a problem. I like the sound of the exhaust system as well, although I'm less enamoured of it when moving at highway speeds. Consumers looking at the Sequoia probably want the vehicle to tone it down when cruising on the highway.

The Sequoia also behaves like a real truck. What's more, the Fox shock-reinforced suspension makes the vehicle bounce more on bumpy roads, nowhere more so than on the infamous elevated section of Highway 40 in Montreal – the Met, as it’s called here. On the other hand, this suspension does a good job when off-road or else when the asphalt becomes smooth as a pool table; in the latter context Toyota's largest SUV is almost as comfortable as a Camry. The steering is heavy and imprecise, but buyers of this type of vehicle know what to expect. Given the heavy weight of the vehicle, it's wise to anticipate longer stopping distances.

The last word
At just over $80,000 before preparation fees and taxes, it's easy to see why the Toyota Sequoia TRD Pro is not as commonplace on Canadian roads as the RAV4. Ironically, during my few days behind the wheel, I came across two other Sequoias on the road. This type of vehicle is for large families who need a workhorse that can tow heavy loads - up to 3,220 kg in this case - because that's the advantage of these full-size SUVs. The Sequoia is also likely to be failure-proof over time, as the reliability of the mechanics is no longer in question.

The trouble is that it is outdated: outdated in technology, outdated in design, and even outdated under the hood. If Toyota aims to take market share away from the category leaders - which frankly would surprise me greatly - it will take a more than this big decade-old model.

Undeniable reliability
The look of the TRD
Resale value 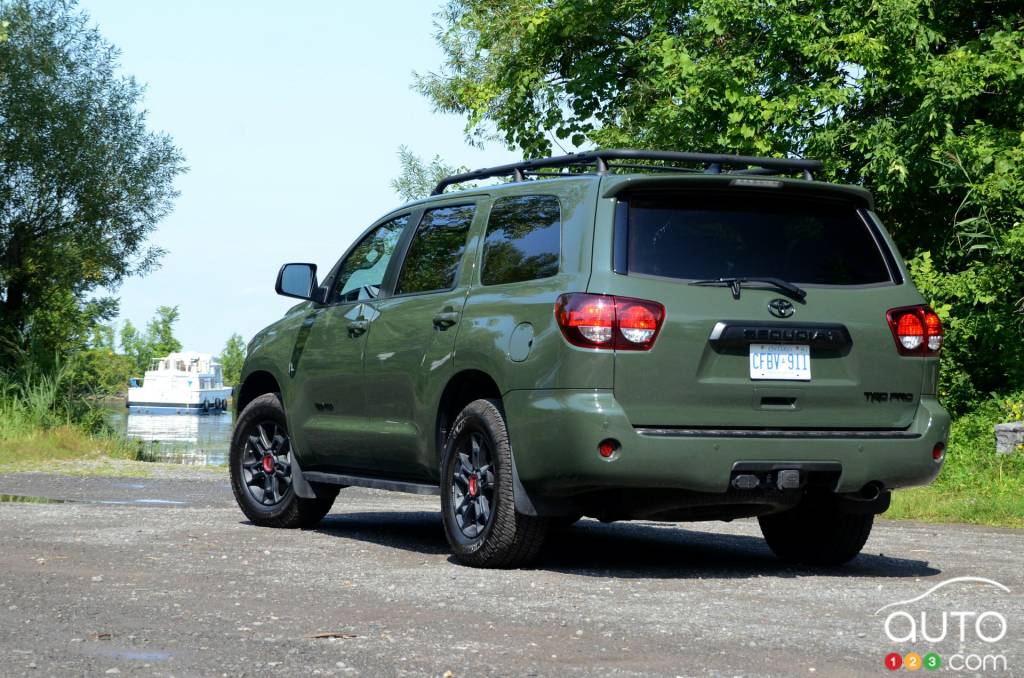 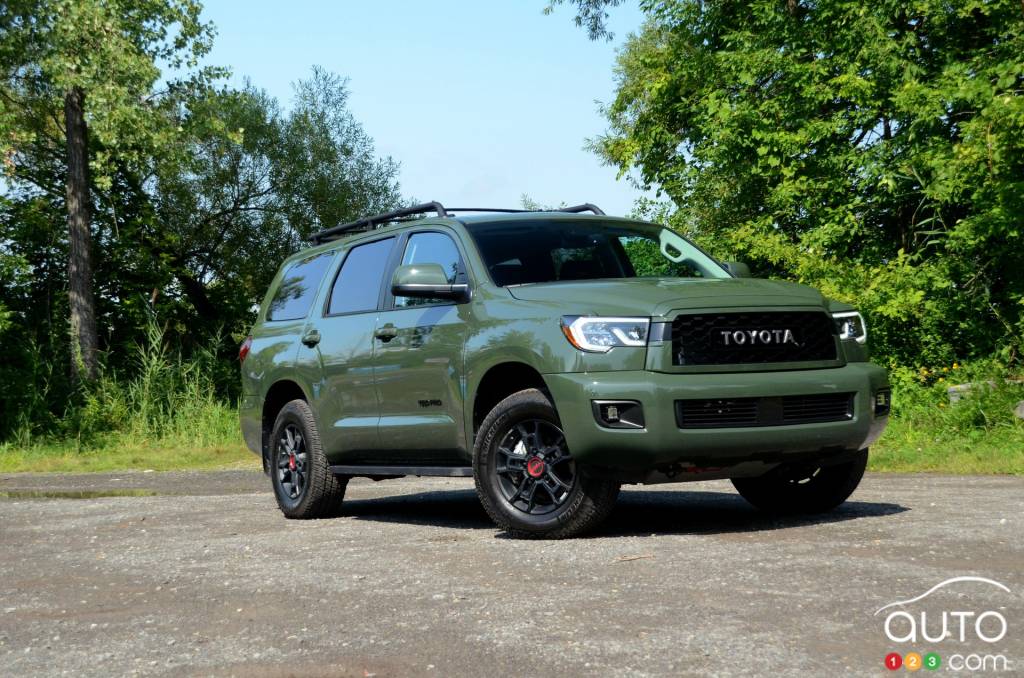 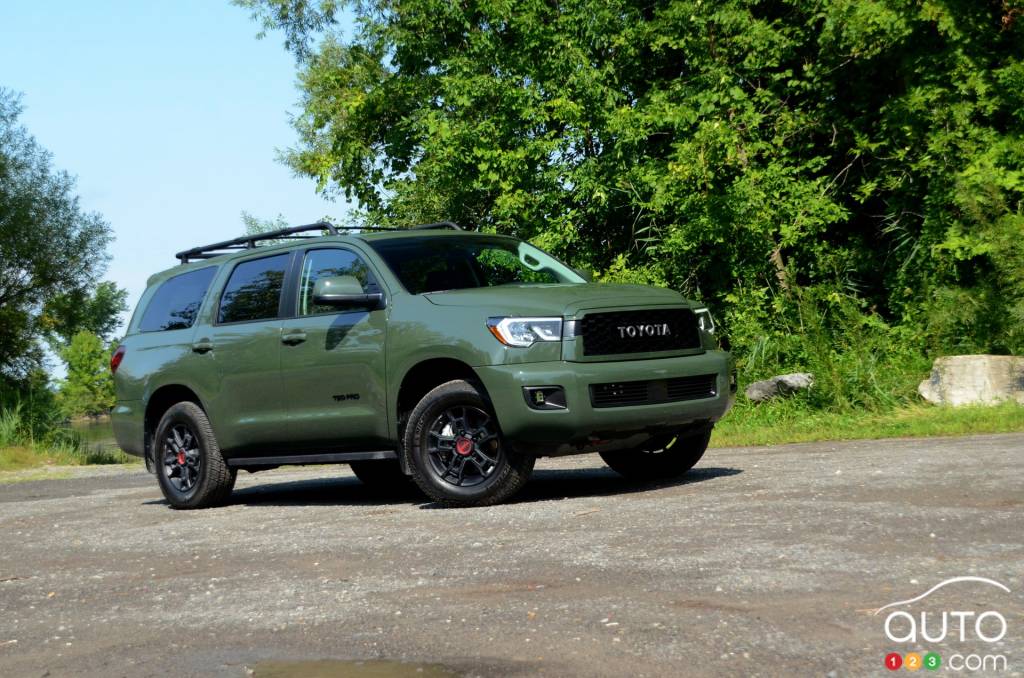 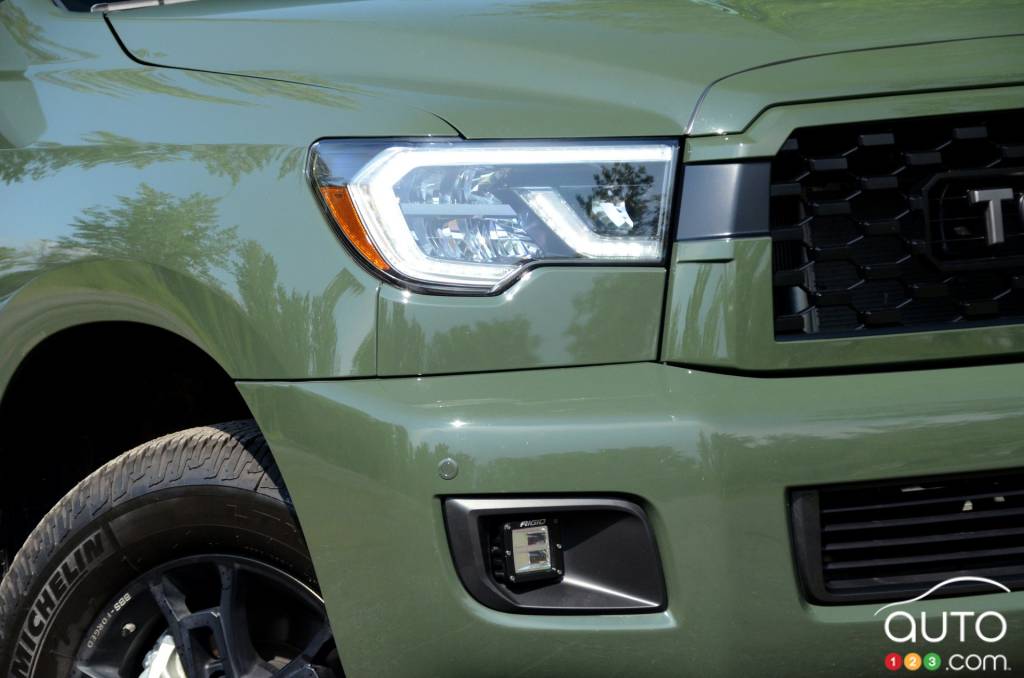 Toyota today unveiled the next generation of its largest SUV. The new Sequoia is more luxurious and capable than ever and inherits a number of advances made ...

Toyota has teased a first image of what is likely the next generation of its big Sequoia SUV. For the moment there are very few details to report, but Toyota...