That Genesis went out some time back and plucked selected designers from the German heavyweights of the sport sedan field is pretty obvious from the moment you get a look at the G70. The car leads with a biggish grille and long nose, has a pleasing (though space-reducing) silhouette highlighted by a sloping roofline, and its back end comes to an almost abrupt halt just beyond the rear wheels. It makes for a sleek-looking car that actively seeks a certain classicism, so there’s nothing particularly jazzy to its looks but it’s well-proportioned and attractive.

The 2021 Genesis G70, the design of which stayed largely pat this year ahead of an overhaul in 2022, also sits quite low to the ground for, yes, optimized aerodynamics, but also to ensure a more steely-eyed demeanour. And a mighty nice demeanour it is, in my opinion. But the flip side of that is this, of course: my partner, who long ago departed the sedan realm for the world of reasonably-sized, high-sitting SUVs, found the drop required to get into the seats ludicrously long, precipitous even. She was still cursing that aspect of the G70 at week’s end.

Which is fair enough, but not really that big a deal for those who will buy a car like this. Like the absence of a large tailgate and cavernous cargo area, a few grunts when getting into or out of the damn thing are just something you expect going in. 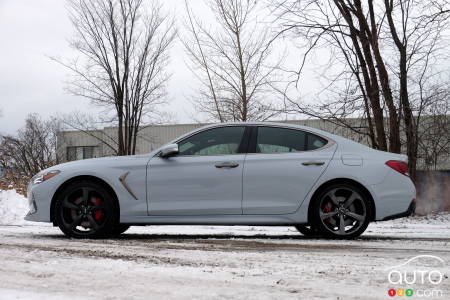 Getting past the badge
It’s getting frankly a little monotonous the way Genesis keeps hoovering up awards for its three sedans (and now its first SUV), and on top of that Hyundai’s luxury brand continues to seriously undercut its German rivals on pricing. And yet, the lack of a certified status symbol on the front and back ends of the car represents a significant hurdle in the premium sedan segments the company competes in. Kudos to Genesis for sticking with it, however, and it’s not unrealistic to think that sooner or later those awards and strong word of mouth will help it make a real dent in that Teutonic armour.

That word of mouth centres around the in-the-zone handling of the G70, the smooth but enthralling performance of its engines – the base unit is a 2.0L 4-cylinder making 252 hp and 260 lb-ft of torque, the other a 3.3L twin-turbo V6 good for 365 hp and 376 lb-ft when using high-octane fuel – and the evident quality of both its construction and its interior. One of the things that have made me a friend of the brand since virtually its inception is the blessed simplicity of its product offerings. And so it is that the 2021 Genesis G70 comes in a just a few, very well-stocked editions. The “base” 2.0T Advanced edition, priced starting at $43,000 (freight fees included), shouldn’t even really be considered a base model, so well-equipped is it. That version comes with the perfectly capable 4-cylinder. For 2021, the Advanced now comes with standard LED headlamps.

Note that this version of the G70 still comes with a manual transmission option, but it’s your last chance to get it - starting next year it will be gone from the product offering. 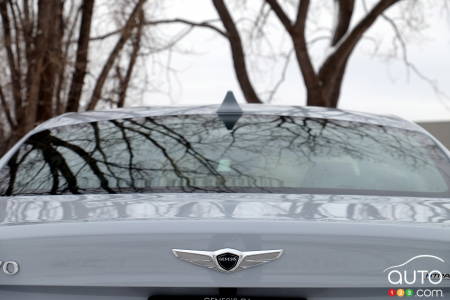 On the road
As nice-looking as the smallest Genesis sedan is, it drives even more nicely. I’ve mentioned the handling, which is as taut and faultless as in any German sedan out there. I’ve alluded to the power of both engines, but particularly the larger 3.3L unit. I’ve referred to the low stance of the car which helps reduce drag. But the smooth-operating 8-speed transmission is also worth mentioning, as are the pleasingly stiff steering wheel and sharp braking power. As for raw straight-ahead speed, 0-100 km/h takes barely 4.5 seconds if you’re purposeful about it, and 60-100 acceleration is just as impressive.

Pay heed to the rear visibility, however, which is pretty limited due to the shape of the car and the rear window. In this regard this is light years removed from the carmaker’s new – and first – SUV, the GV80 with its large fenestration.

I note as well the relatively subdued screen, which spans “only” 8 inches diagonally. Really, it’s fine for doing all you need to do on it, but in 2021 this is a relatively small unit in this car segment. That said, what is accessible there is ergonomically friendly and the screen resolution is solid. Largely, it’s as simple and straightforward as the G70’s pricing structure. Otherwise, the seats are supremely comfortable, once you’ve managed to drop yourself into them of course. The seats in back are just as comfortable, but the problem there is occupants won’t enjoy them nearly as much due to the limited space available for legs and heads. The G70 is a four-door sedan but it’s not that practical as a family sedan. For that you have to look next to it in the Genesis showroom (or mall boutique) at the G80.

As you can see, I had occasion to drive the 2021 G70 on snow-covered and icy roads, and found little-to-no fault with the able all-wheel drive, not a constant system like Subaru’s but one that kicks in as needed to meet the road conditions. It ensured solid grip and control on tricky surfaces that might have forced the RWD G70 into caution mode.

As you’d expect, there are drive modes to choose from (Comfort, Eco, Sport, Smart or Custom) that tweak certain parameters to give you the G70 you want on the road. Eco might help you improve (slightly) the model’s otherwise mediocre performance on the fuel-economy front, but I suspect most drivers will spend most of their time toggling between Comfort and Sport (the first when there are others in the car, the second when there aren’t). Conclusion
It wouldn’t be fair – it would be kind of silly in fact - to call this G70 an aging model. But the substantial update coming next year will be welcome, because others in the segment have been giving themselves youth treatments and are starting to outpace the Korean product in terms of technologies, luxury touches and other amenities. I would add to that the car’s looks, as much as I like them. From what we’ve seen, the next G70 will be a little flashier, and that’s a good thing. This is already an exceptionally fine car, and the right changes could take it to another level. And they will have to, if Genesis can realistically hope to overcome the status deficit its luxury compact sedan currently has to deal with.

Exceptional handling
Plenty of power
Comfortable interior (in front)
Thoroughly elegant, inside and out 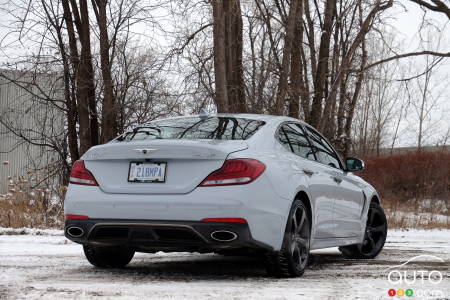 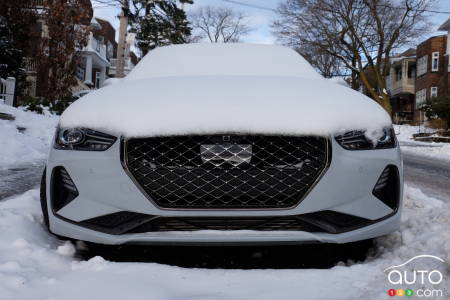 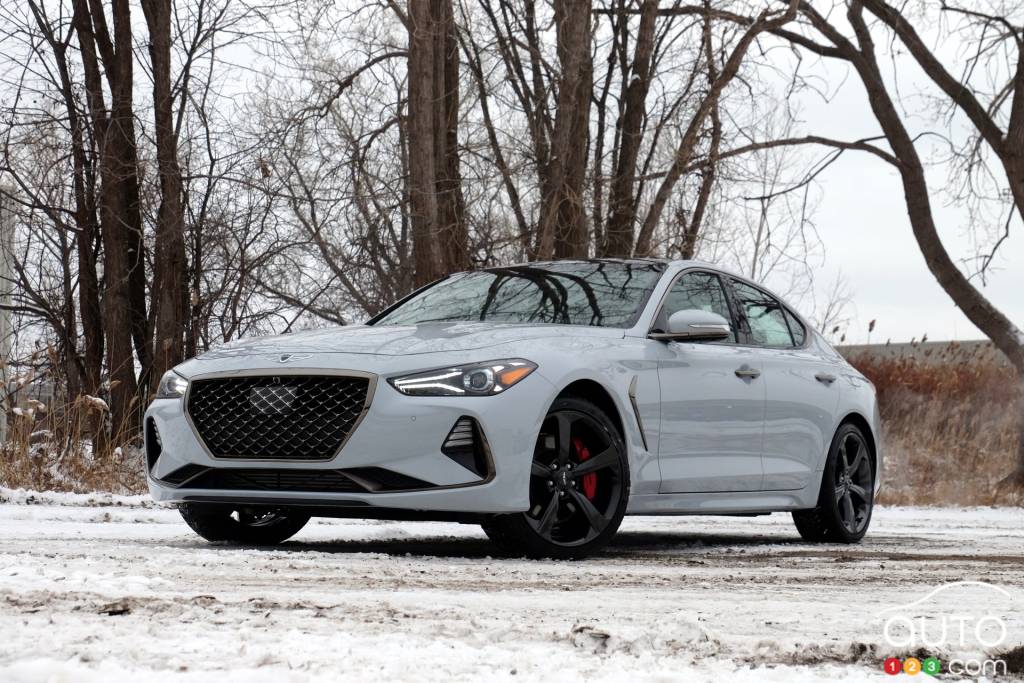 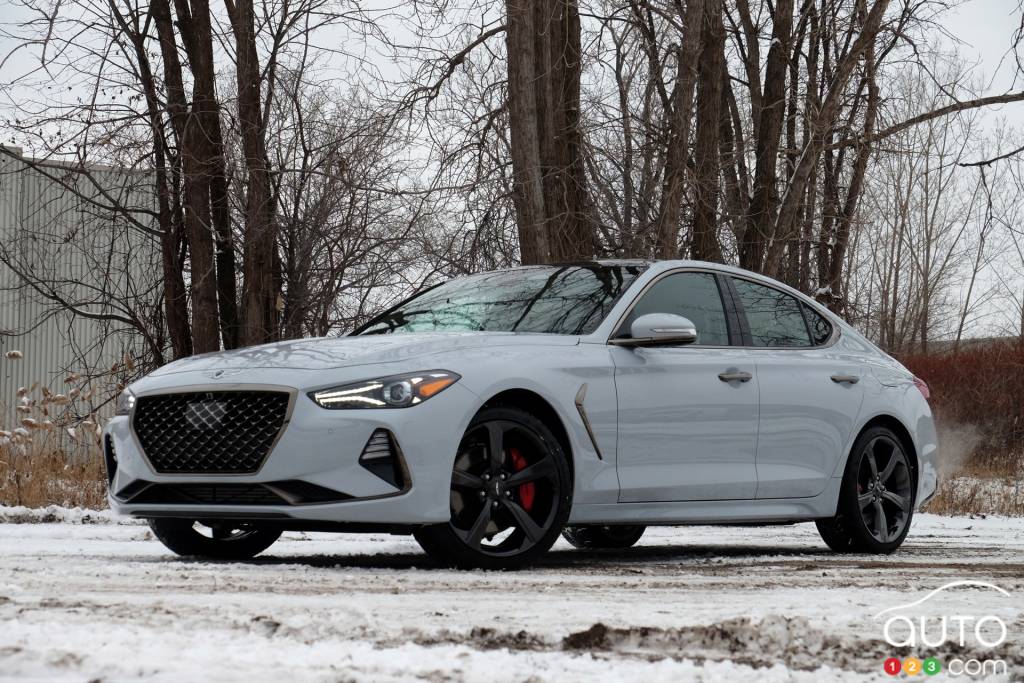 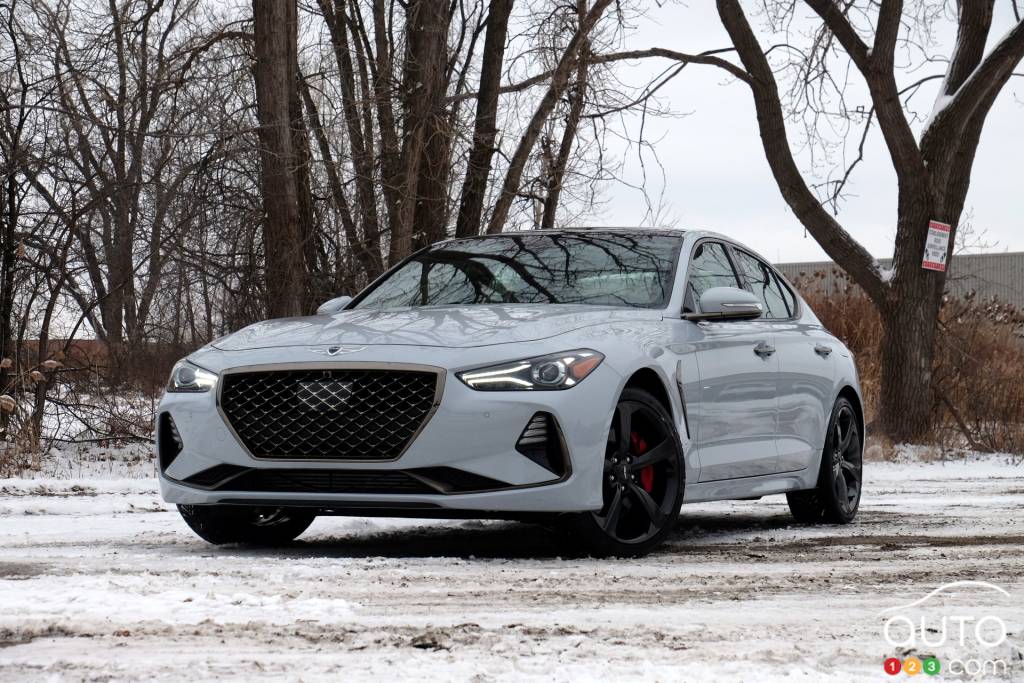 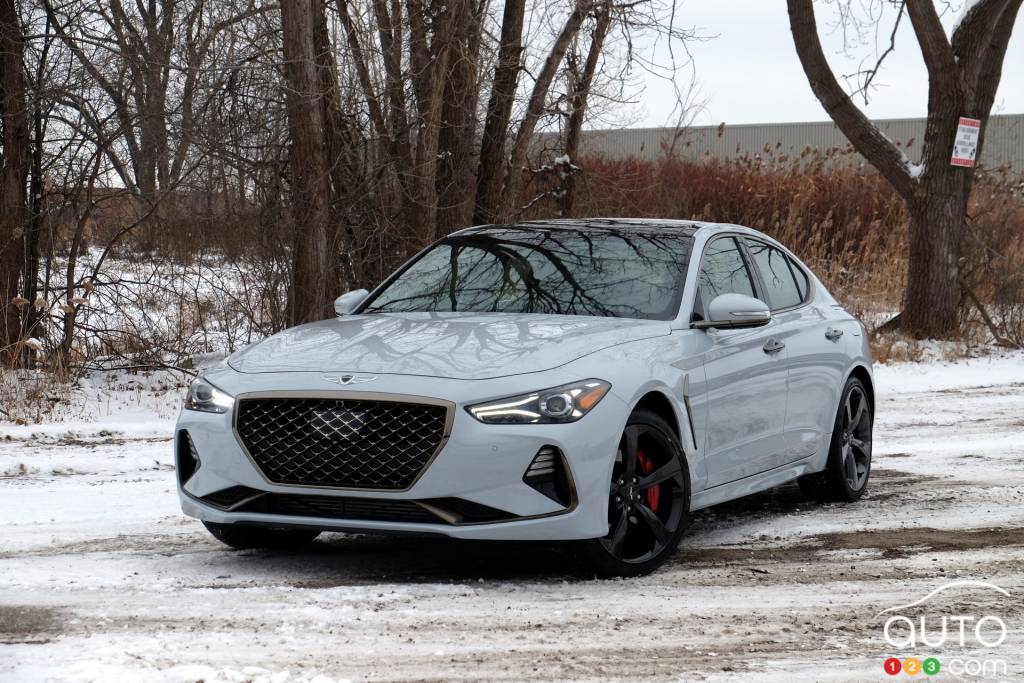