We test out the base model and the totally nuts R coupe version Automotive columnist: Dan Heyman , Updated: 2020-02-10

Lisbon, Portugal - For 2021, the Jaguar F-Type has received a refresh that brings new styling and interior niceties, in addition to which Jaguar has also moved some trims around for a new alignment for 2021. We travelled to Portugal to put it through its paces on the wonderful mountainous and twisty roads that wind through the country’s interior between Porto in the north and Lisbon further down south.

First of all, though, the styling. The additions are quite plain to see, and include narrower headlamps that are also wider, plus a wider front clip that has been styled to look as though it’s being pulled as tightly to the corners as possible. The hood looks broader, too, but still long – according to Jaguar Chief Designer Julian Thompson, long hoods denote power because back in the horse and carriage days, you needed more horses for more power. More horses, of course, means more ground covered ahead of the carriage. So, a long hood = more horses underneath.

The side view also gets complimented by new wheel designs, while the rear fascia, aside from some nips n’ tucks here and there, returns pretty much unchanged. Which is a good thing, because the F-Type – in either coupe or drop-top form – has always looked great from this angle. From the ultra-narrow taillights on all models to the great quad exhaust the V8 versions get, it’s a great mix of the old and the new when it comes to Jaguar styling, which has roots in the E-Type/XKE of the ‘60s – model that Enzo Ferrari himself called “the most beautiful car in the world”.

Those are some big shoes to fill indeed, and the F-Type managed the feat rather well when it debuted. It continues to do so now, albeit in a slightly more restrained manner. Its new formula has echoes elsewhere among other manufacturers lately – I see a little bit of Audi e-tron in those headlights, for example – and you can understand what Jaguar is getting at. While it saddens me that a bit of the old F-Type’s uniqueness is gone, this is still a very good-looking car with a great stance. 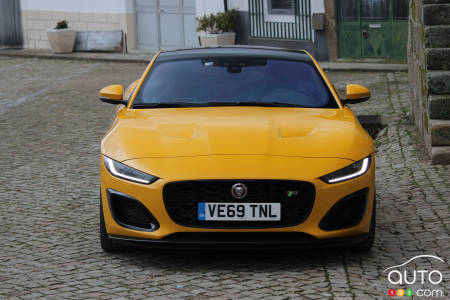 The interior
Inside, the changes come more in the digital form, for instance the digital gauge cluster is now sharper and graphically updated and the Touch Pro Duo system can now be updated automatically wirelessly. That’s great, but with German rivals really stepping up their game in the infotainment department, you knew this was coming even if it is a little late to the party.

The F-Type also still remains bereft of a heads-up display system – not a big deal for me as I tend to still look at the traditional gauges (especially when you’re installed nice and low like in the F-Type) - but again, when it comes to keeping up with the Joneses, the F-Type is a little behind here.

I do love the configurable gauge cluster, though. Having the tach front-and-centre is my preferred setting, though. It’s more race car-like and when you’re winding along the sublime N222 road south to Lisbon, you really do want that information front and centre. On the road
Speaking of winding along: 2021 also sees the arrival of new springs, anti-roll bars, and dampers for the F-Type R as well as stiffer rear knuckles and upper control arms. It’s a comprehensive chassis update that can be felt as soon as you start off.

The old car, even in hardtop form, would exhibit a somewhat crashy ride over large or repetitive bumps that would in turn lead to vibration in the mirrors and the occasional squeak from the body. Not so anymore.

Not only does the F-Type look more grown up, it behaves and rides in a more grown-up fashion as well. Bumps are handled in almost luxury car-like fashion, the body and chassis tracking true over stuff that I swore would rattle the ol’ fillings. Nope. Just perfectly-set dampers and vibration control. Don’t think that’s softened the ride when it comes time to push it, however. While the way the chassis components and body combine to insulate the occupants is impressive, just as positive is how the R will transform into a proper sports car when pushed, even without adaptive dampers. Which our tester didn’t have, and which are actually not available. Maybe if/when the SVR comes.

For now, it’s a more traditional set-up, but thanks to good rebound and bump tuning, the F-Type responds to being pushed through the twisties just as its looks suggest it should. The body stays composed even through repetitive, weight-transferring turns – of which there are plenty of on these roads – and when it comes time to brake hard on entry and put those 575 horses to the ground on exit, the squat and dive is so minimal that you’re left wondering, once again, how it manages to stay so composed at lower speeds on cobblestoned streets.

Above all else, though, the R Coupe is incredibly fast and fun. Because it has a supercharged powerplant, power delivery is immediate and accompanied by a bloody great whine as the ‘charger gets on boil. Then, power is fed quickly through the 8-speed paddle-operated auto transmission (your only choice, no matter the trim) to the four wheels (but mainly the rears, as it is a very rear-biased system running a 30:70 front:rear power split) and you proceed to heave yourself down the road at furious pace. 0-100 km/h takes about four seconds and given the space, you can reach a limited top speed of 300 km/h. That’s no joke and proper 911 Turbo-like performance. Of course, being that some power will always be transmitted to the front wheels for stabilizing purposes, there’s a little less drama here than a proper RWD sports car, especially if you have TCS on. That, coupled with grippy Pirelli P-Zero performance rubber, means it’s very hard to un-stick the R. Of course, turning those pesky nannies off will change things but that AWD is always going to be there. And that’s fine because it makes for some rip roarin’ fun on roads like this.

The steering could use a little more feel, I guess, but other than that, this is a properly involving drive fitting of a world class sport car.

The P300
In contrast, the steering was actually one of the highlights for me when it came time to test the P300 convertible. You may be losing about 280 horses over the V8, but 295 is still generous and on par with the likes of the Porsche 718 Boxster and BMW Z4. The smaller engine up front means a lighter front end, meaning a properly responsive steering rack even if it gets relaxed tuning compared to the R. Even with the added weight from the roof mechanism (it’s a folding soft top), the RWD P300 drop is still lighter than the AWD R Coupe and you can feel the difference almost as soon as you hit the road, with the P300 seeming more the sports car and the R seeing just a titch more grand tourer.

It’s a wicked-fun drive, too, the P300, and a little more accessible. Carrying off a smooth upshift in the R, for example – especially in Dynamic Mode – takes some finesse. I eventually got it but the window in the rev band is a narrow one. It’s a little more relaxed in the P300, making for somewhat smoother progress. (When you do hit that perfect shift in the R, though – watch out. There’s no break in the fury and it revs so quickly, that you’re already thinking of the next shift as soon as you flip that paddle).

Like in the Coupe, Jaguar has clearly paid attention to chassis fidelity because even without the comfortable embrace of a fixed roof, squeaks and rattles were pleasingly absent, while the canvas roof does a decent job of keeping noise out when up. Yes, my drive partner and I found ourselves talking a little louder in the P300 than in the R, as wind noise will break through. An extra layer of sound-deadening material on the underside of the top would be welcome. I got over that pretty quickly, though. Sure, the decibels can get to you but why let them? There’s a lot of car here, and a lot to like about the drive and if you’re buying a convertible, well, you’ll want to drop the top anyway, right?

Indeed, it’s good enough that if time were to come to take one of these out again, the decision about which version to choose would not be a black and white one. It gives me more pause than I thought it would at the outset of the drive. But in the end, it’s hard not to want another swing of the sledgehammer of adrenaline that the R provides. It would be the one I’d take out again. 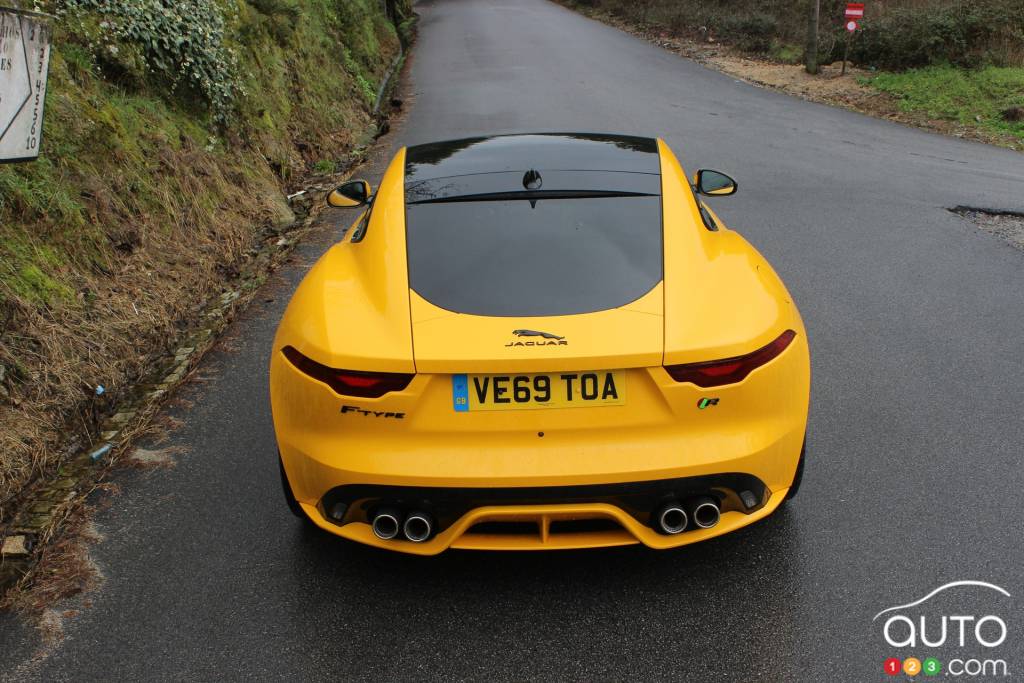 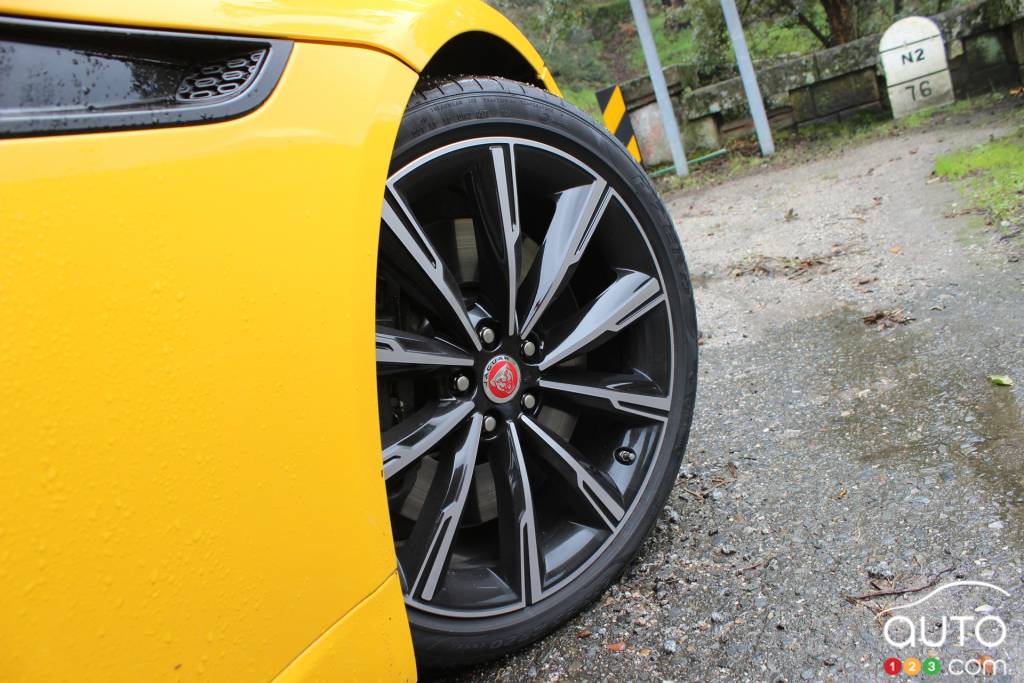 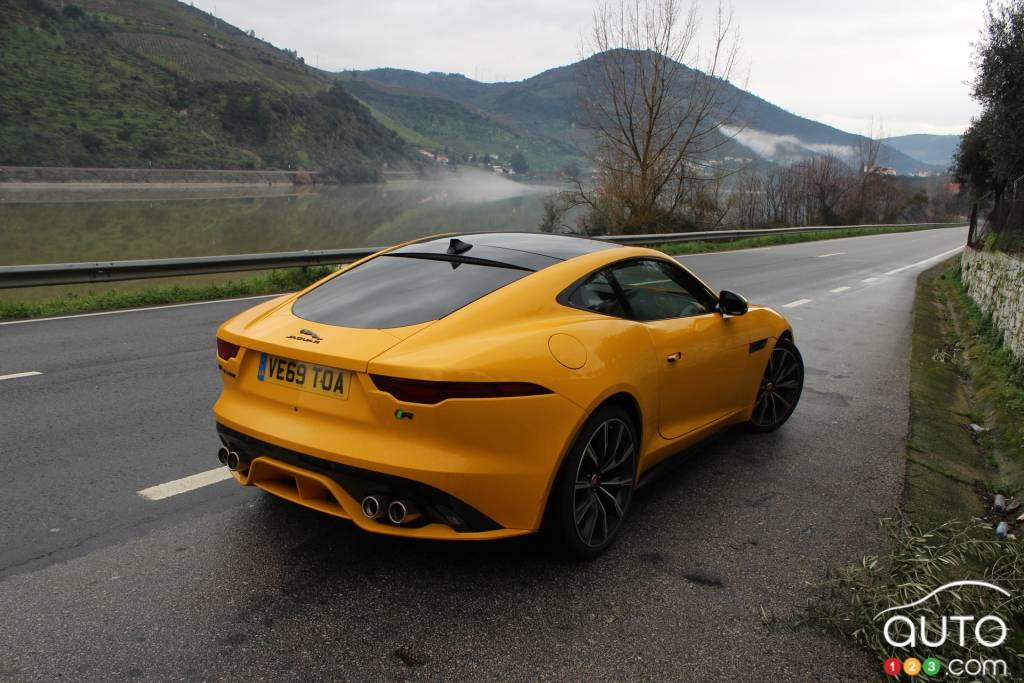 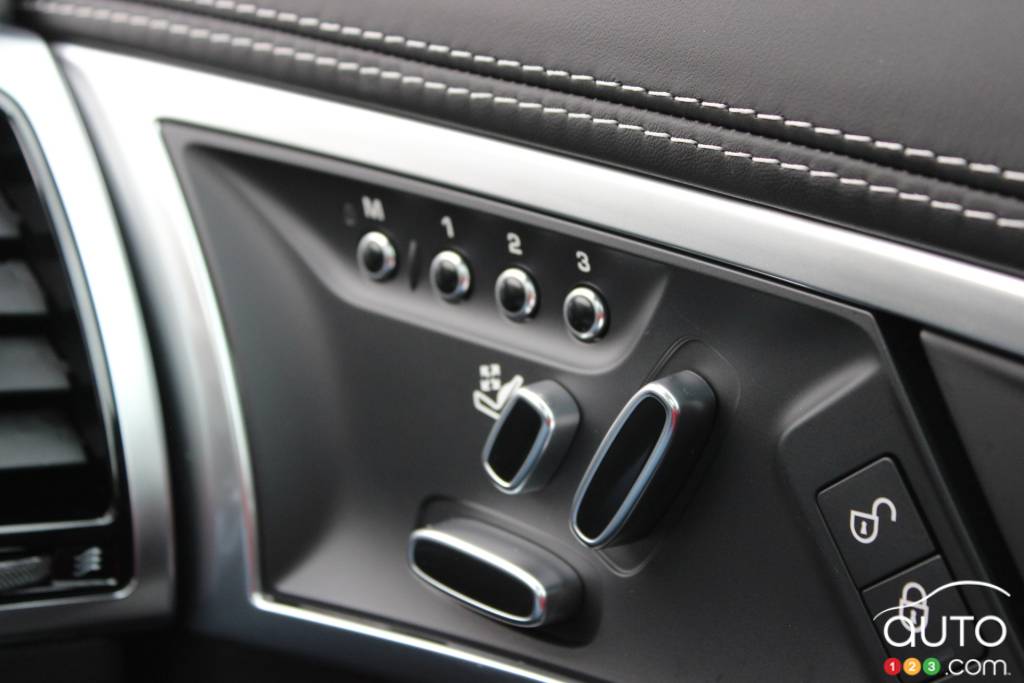 To promote the pending debut of its 2021 F-Type, Jaguar tapped the child within and sent a miniature Hot Wheels version of the refreshed sports car careening...

Jaguar has confirmed that 2024 will be the last year for its sporty F-Type. The model, which made its debut for 2014, will have had a very successful career,...