Nissan’s small SUV has settled well into its role as a mainstay in a category that as grown steadily in the past few years in Canada, both in terms of size and market share. The Kicks is wonderfully agile and particularly well-suited for life in the city, but it’s also a very serviceable weekend adventurer fit for couples or small families.

I had a wonderful occasion to test those abilities out with a week spent at the wheel of the 2021 edition of the model, with a bonus of two mountain bikes generously provided by the automaker, gesture conceived as a friendly incentive to get me out of city limits for some fresh air and exercise. Though as a relative beginner, my first real descent had me wondering what Nissan had against me to want my neck broken. Normally, that happens AFTER a less-than-friendly review, not before. Interesting strategy…

In any event, most of my Kicks time was nonetheless spent navigating urban and suburban roads and thoroughfares, the natural habitat for the small crossover. And for the most part, I experienced the same kind of competent, unassuming performance I’d experienced previously at the wheel of prior editions. Which is not surprising given that the changes for the 2021 model-year are relatively minor.

Some of those are visual, in fact, including a sportier bumper, thinner headlights and a slightly meaner-looking grille. The two-tone finish approach is back, and so my tester came in a sharp red-body-black-roof outfit that pleased me just fine. 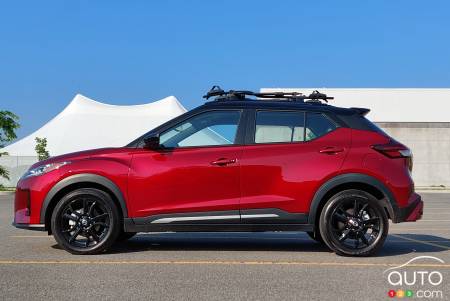 Otherwise, the centre console has been redesigned, there are new upholstery possibilities, some versions get new rear disc brakes and adaptive cruise control is now part of the offering.

The product range looks like thus: The base model starts the ball rolling at $21,843, and comes with Android Auto and Apple CarPlay compatibility. It’s followed by the SV ($24,843), which gets 17-inch alloy wheels, remote starter and leather-wrapped heated steering wheel and that intelligent cruise. The SR starts at $26,043 and it adds black roof rails, a dark chrome grille and LED headlights and accents. At the top sits the SR Premium ($26,943) with its intelligent 360-degree monitor, premium Bose audio (with headrest speakers), seats appointed in what’s called Prima-Tex and black alloy wheels. This last is the variant we drove.

Now, $21,843 for a car means that you can’t expect every little bit of tech to be included, and the Kicks doesn’t include it. The priority, rather, was to deliver the essential stuff the model’s target audience wants and needs, but at an affordable price. Our SR Premium is far more equipped with goodies, but it’s up to you to decide what’s essential for you, and pick the trim and options that you’re comfortable paying for. 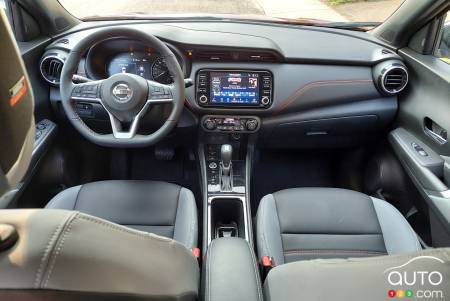 Whatever you settle on, you’ll get a front-wheel-drive car (there’s no option for AWD) that runs via a 1.6L 4-cylinder engine delivering 122 hp and 114 lb-ft of torque, managed by a CVT transmission. Yes, THAT CVT transmission, which Nissan has taken a few knocks on the chin for over the years. Honestly though, here it works competently enough, and while it can tend to get the engine screaming if you push things too much, it does the job. Just don’t push things too much, after all this is a Kicks, not a Beemer.

We could always wish for more than the engine and its mere 122 horses deliver, but this is good enough, particularly given the price point. You won’t be tearing off from lights, or at least you’ll look ridiculous if you do, but acceleration is acceptable enough to make highway entry and passing stress-free. Again, good enough.

I mentioned the tech, but you should know that if there’s not a massive quantity of it inside the 2021 Kicks (there’s no navigation for instance), the quality of what’s there is decent-to-excellent. Particularly in the top-line SR, with its nice-sounding premium audio system and headrest speakers. From the SR version on up, the touchscreen is 8-inch and quite user-friendly, and the multimedia system is generous enough to leave most of the essential controls (like climate control, audio level, etc.) to physical buttons, each well within reach. In front of the driver sits a nice 7-inch data display screen. 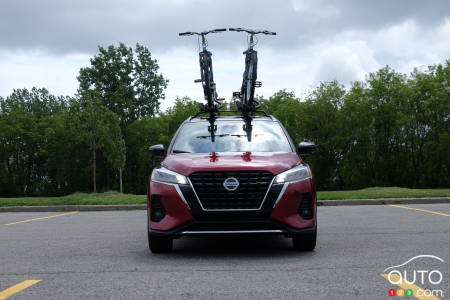 On the road, as mentioned the Kicks is great in the city, thanks to its small size, tight turning radius and overall nimbleness that belies its lack of straight-ahead raw speed. It is also good on the highway, though, which we were able to confirm on more than one day-long outing. Comfort levels are fine, particularly in the front row, and the suspension proved quite able, helped along by the bigger tires on our tester’s 17-inch wheels.  Visibility is excellent all around in this sort-of-squarish SUV, so you’ll not feel swallowed up even surrounded by bigger vehicles on the highway or in traffic gridlock.

If I were driving in winter, the lack of all-wheel drive would be more of a concern than it was as we gallivanted around on our road trips in the heat of summer. Potential buyers will have to make a decision about the importance to them of that function, since there are rivals in the segment that offer it (hello Subaru Crosstrek). On the other hand, without it the Kicks delivers an enticing 7.2L/100 km combined official fuel consumption rating.

One more thing: don’t expect the kind of cargo space you’d get from a compact SUV. If you plan on lugging substantial amounts of stuff, you’ll have to go for the Rogue (the Qashqai sits in between in the Nissan lineup, but it actually offers less cargo space than its slightly smaller sibling). With rear seats in place, you get 716 litres, and that climbs to 1,503 with the seats down. That’s of course noticeably less than the Rogue with its 934 and 1,828 litres. Again, this is one of those elements to consider beforehand as you weigh what you’re comfortable paying for. 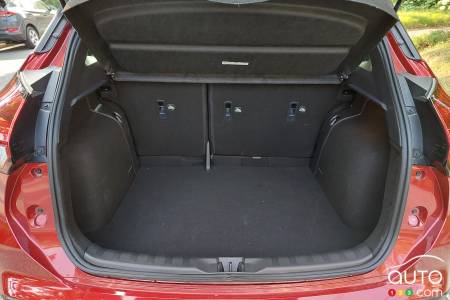 Overall, the Nissan Kicks occupies a specific space in the small crossover segment, alongside the Kia Niro and Hyundai Kona. The three models are nearly interchangeable with their same basic form and dimensions and similar driving experiences (albeit with some differences). Over in another corner of the category sit the freakier Toyota C-HR and Kia Soul, and in yet another the more-dynamic but tiny Mazda CX-3. But I regularly hear even auto journalists mistakenly refer to the Kona when they mean the Kicks, and vice versa.

At which point it’s up to shoppers to test drive each, and compare the features included and available with each. The good news is there’s no bad choice among them, and that certainly includes the Nissan Kicks. I say this despite my narrow escape from catastrophe on one of those mountain bikes… 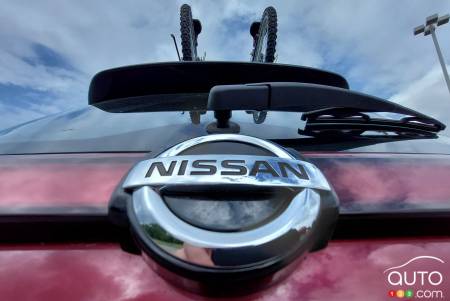 No all-wheel drive
Cargo space is OK, but no more
Meek engine, CVT still could be improved 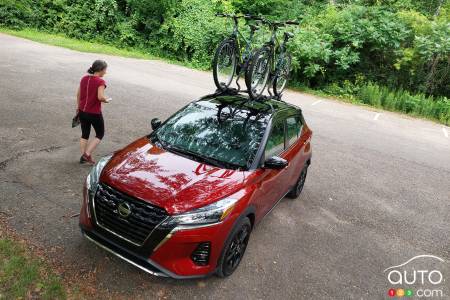 Photo: D.Boshouwers
2021 Nissan Kicks, from above 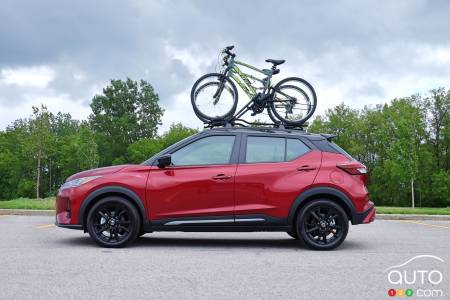 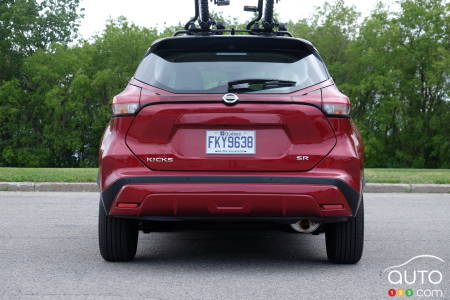 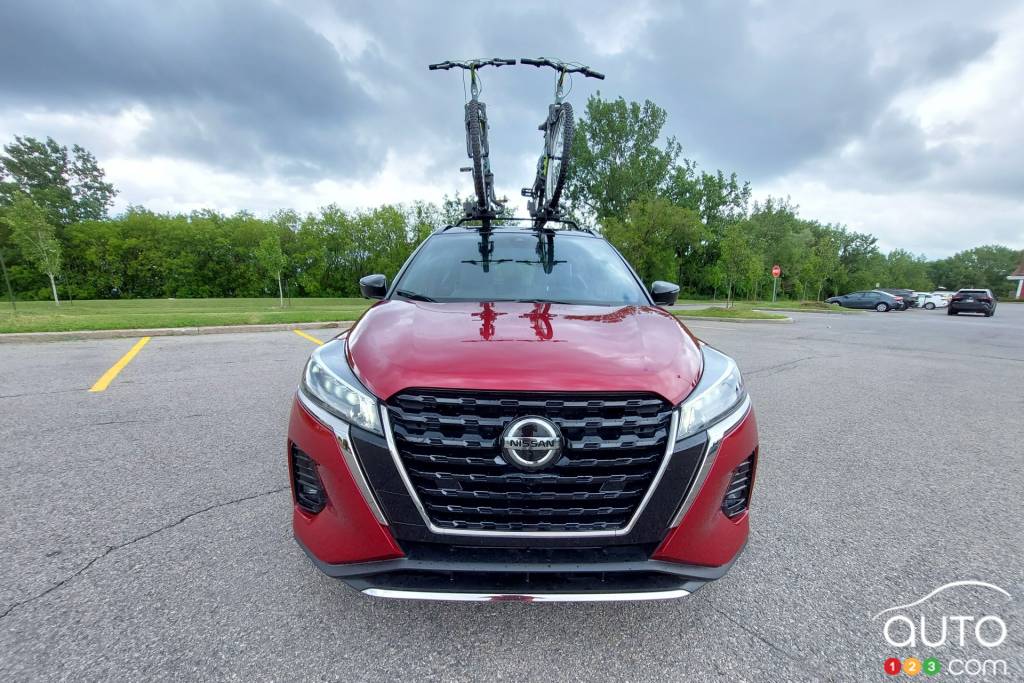 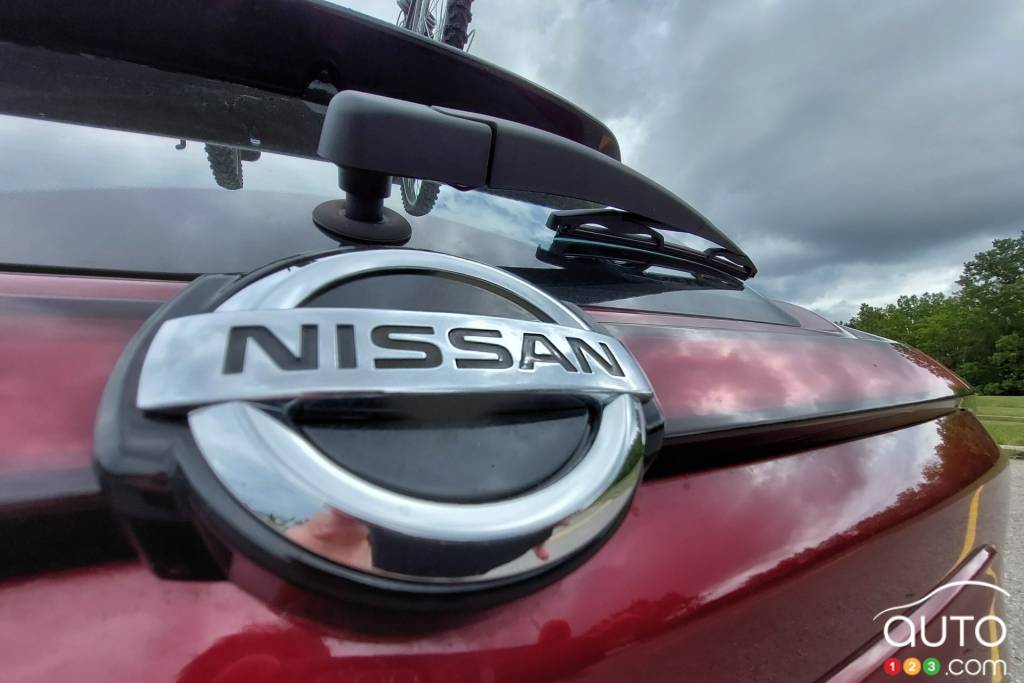 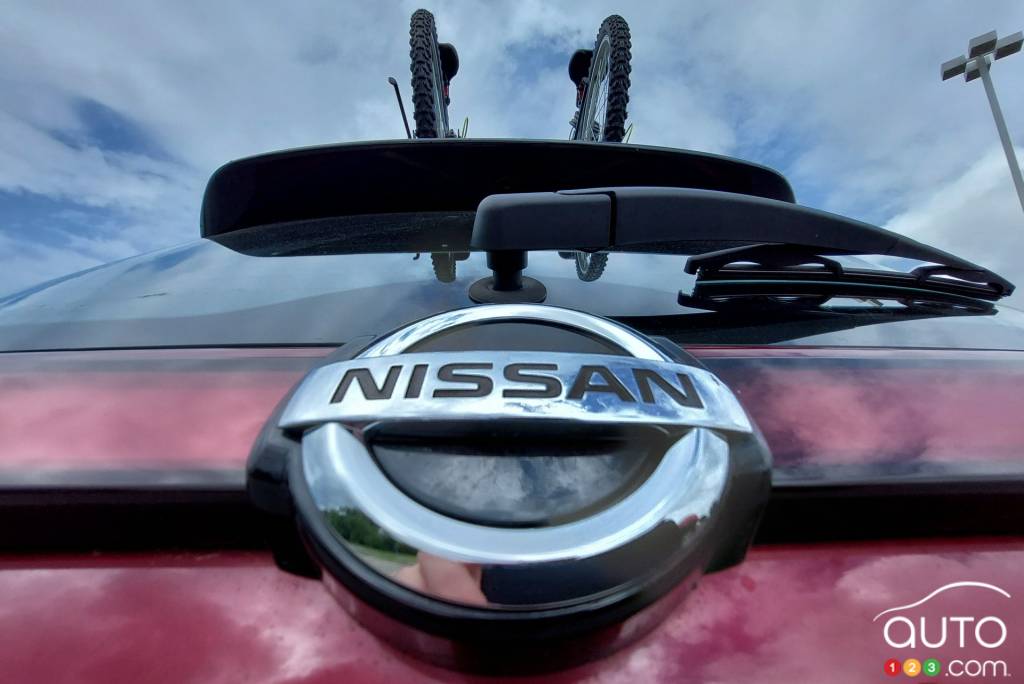 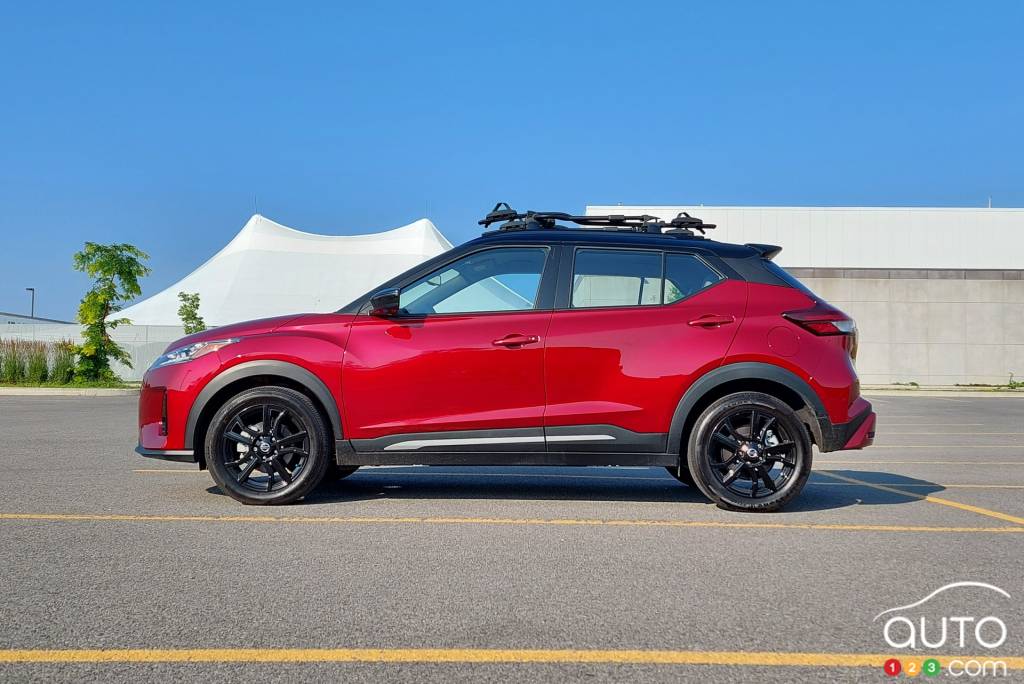 Substantial Update for the 2021 Nissan Kicks

The Nissan Kicks gets a host of updates for 2021, including greater connectivity. The first generation of the small SUV model, currently halfway through its ...

Nissan is making some revisions and improvements to its Kicks SUV for the 2021 model-year. A first teaser image plays it coy regarding what changes are on th...

2022 Nissan Kicks Review: One Compromise Too Many

Auto123 put the Nissan Kicks to the test over a two-week period under the hot California sun. The conclusion is always the same with this vehicle: it has a ...