The Nissan Rogue has, since it first debuted in 2008 but especially since the latest generation launched for 2014, carved out a decent home for itself in the very competitive compact SUV segment, due to a number of factors including affordability and reliability. You only have to look at the number of Rogues on the road to see that consumers have been won over in large numbers in Canada.

The Rogue is for those who find the Qashqai a bit limiting and the Murano too big and/or aging, and sure enough within the brand it largely dominates those two models in terms of sales. This vehicle is definitely a cornerstone of Nissan’s lineup, and as such the automaker really couldn't afford a swing-and-a-miss with the latest overhaul, because in this segment, the competition is intense - just think of Toyota's RAV4, which has been a virtual bulldozer, before and since its own big revision in 2019. For Nissan, there was just no room for error.

What's new
The new 2021 Rogue, fully redesigned and rethought this year, is now available in three trim levels: S, SV and Platinum. In the S and SV versions, you can choose between front-wheel and all-wheel drive. All models are powered by a 2.5L inline four-cylinder engine that develops 181 hp and 181 lb-ft of torque in conjunction with a continuously variable transmission (CVT) called Xtronic.

Price is $30,443 or more for the front-wheel-drive S version, which features 17-inch wheels, Nissan's 360 Safety Shield, 8-inch touchscreen with Apple CarPlay and Android Auto integration and heated front seats. Note that even at this price level, you also get a heated steering wheel and dual-zone automatic climate control. To get the all-wheel drive, you'll have to pay an additional $2,300.

The version just above, SV, is priced at $33,943 in front-wheel-drive configuration; all-wheel-drive will cost you an additional $2,300 here too. This version includes 18-inch wheels, a large two-panel sunroof, Smart Perimeter View, Pro-Pilot Assist System and Nissan Connect, which will allow you to control certain vehicle functions from wherever you are.

The most-equipped version, Rogue Platinum, is yours for $41,943 or more. At that price, you'll get the works, and that includes 19-inch wheels, Nappa leather, 12.3-inch screen, 10-speaker Bose audio system with not one, but two subwoofers and heated rear seats. 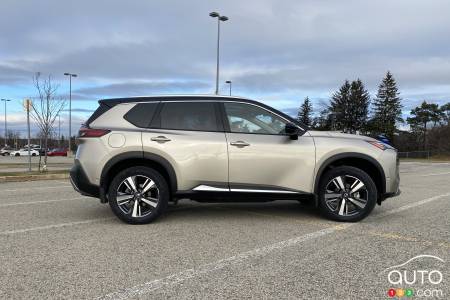 With the 2021 Rogue, Nissan likes to say it puts safety first and it’s true, so included is the 360 safety shield right from the first trim level. This suite of systems is pretty comprehensive (if sometimes intrusive) and offers an emergency braking system with pedestrian detection, so it can stop the vehicle if it detects a danger in front or when reversing.

There’s also a blind spot warning system, lane departure detection, cross-traffic alert and high beam assistance. Safety is laudably prioritized, not just for the occupants but also those in the vicinity of the vehicle. 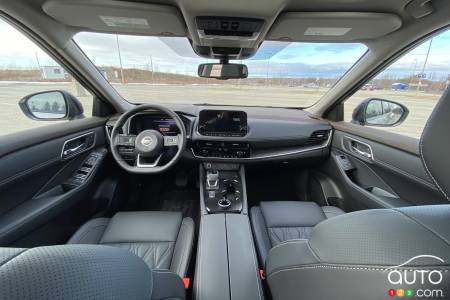 On-board comfort
Nissan has an ace up its sleeve when it comes to making its interiors ultra comfortable (especially the Rogue), and that’s its "Zero Gravity" seats. Now, the previous generation Rogue was already very comfy to spend time in, but the new one is another notch above, and also improved in terms of soundproofing. The space available on board is pretty impressive as well, the Rogue being one of the best in its class in this regard.

In back, the doors open almost 90 degrees, which is great when you have young children or if you have to load bulky items. Just watch out for the vehicles parked next to yours! Taller folks will be happy to know that the leg and head room available is generous. The panoramic roof also provides a ton of beautiful natural lighting inside the vehicle.

All of the vehicle's major functions are easily accessible, and a large knob between the two front seats allows you to select the vehicle's drive mode. The steering wheel flange is easy to grip, and we really liked the Rogue's new shifter design, which involves a small knob that fits easily in the palm of your hand and has three different positions - R, N and D/M, with the P button above the knob.

Also note that in the Platinum version, CarPlay and Android Auto are connected via Bluetooth; congratulations to Nissan, because only certain luxury vehicles currently offer it. 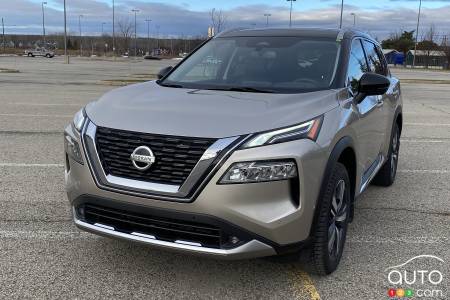 At the wheel, the Rogue handles very well. There's a slight floating feeling, but the SUV is able to absorb road imperfections nearly perfectly.  The overall package is above average, although it's still some ways from delivering the kind of driving dynamics you get from Mazda's CX-5, which kind of remains the reference in the category.

Powertrain
There’s good and bad news here. Where we note a small weakness is in terms of brute power. The Rogue relies on a 2.5L 4-cylinder engine making only 181 hp, which is adequate in and of itself but a little stingy for a vehicle of this size when you stack it up against competitors, several of which offer turbocharged engines that generate around 250 hp - and some of these models are just as frugal at the pump as the Rogue.

The powertrain comes with the aforementioned CVT, which - thank you Nissan - has been modified to mimic the gear shifts of a conventional transmission. This improved unit offers staggered and dynamic shifting, a wider range of gear ratios and smoother adaptive shift control. The result is noticeable and translates into a comfortable ride and a quieter on board experience. Even under heavy acceleration, the engine no longer appears possessed by a banshee. This new CVT seriously helps the engine perform more optimally and even compensates – in part - for the lack of raw power.

On the fuel-consumption front, Nissan is announcing a combined 8.3L/100 km rating; during our week-long test drive, we brought the SUV home with a total combined 9.2L/100 km, resulting from mostly suburban driving at the start of winter. 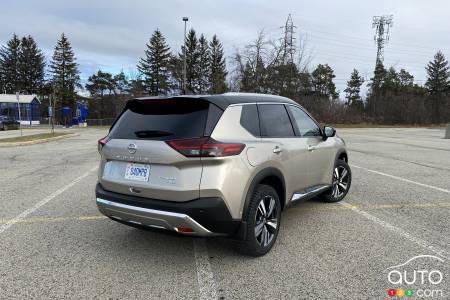 Conclusion
The 2021 Nissan Rogue is greatly improved with this new redesign. The outgoing version was frankly aging in comparison with the fresher models it has to compete with, but the Rogue is now playing on a level playing field. It’s interior is even more spacious than its direct competitors and its fuel consumption is among the lowest in the segment. On the other hand, its engine is one of the least powerful. On the other, other hand, in this 2021 version, the CVT transmission, which has long been Nissan's Achilles' heel, actually adds to the Rogue's driving pleasure.

The technology included places the model among the leaders in the compact SUV class. Even in its basic version, the Rogue benefits from the safety and drive assist feature you hope and expect to get in 2021, as well as an 8-inch screen and, of course, Apple Carplay and Android Auto.

All that's missing is a hybrid and/or plug-in hybrid version. For now, though, as long as Nissan can supply a large-enough inventory of models to Canadian dealerships, the Rogue should find itself, at year’s end, at or near the top of the compact-SUV sales chart! 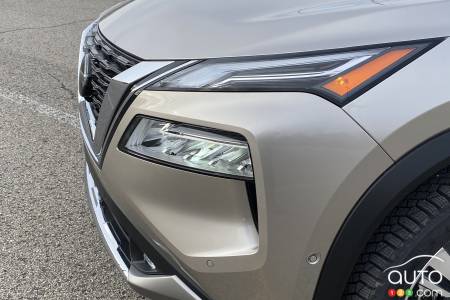 Not the most powerful engine
No hybrid or plug-in version in 2021
Lack of dynamism, overall 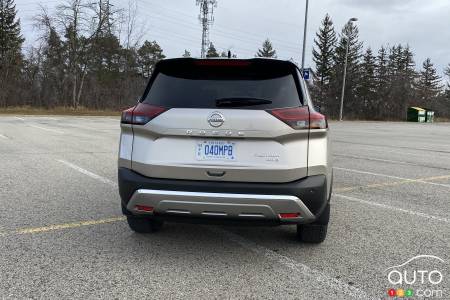 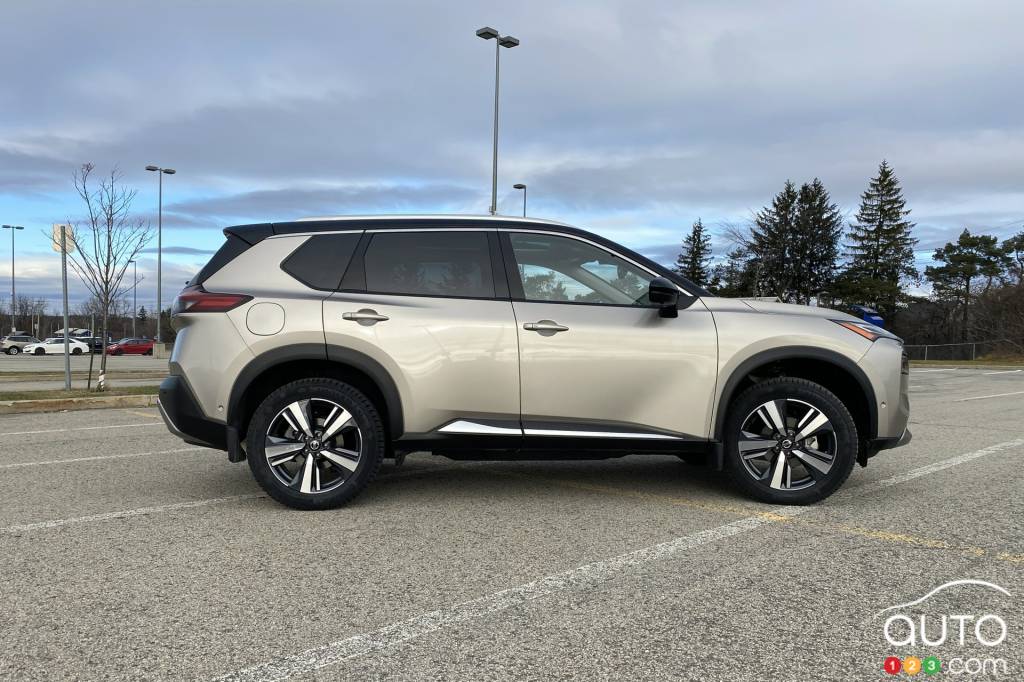 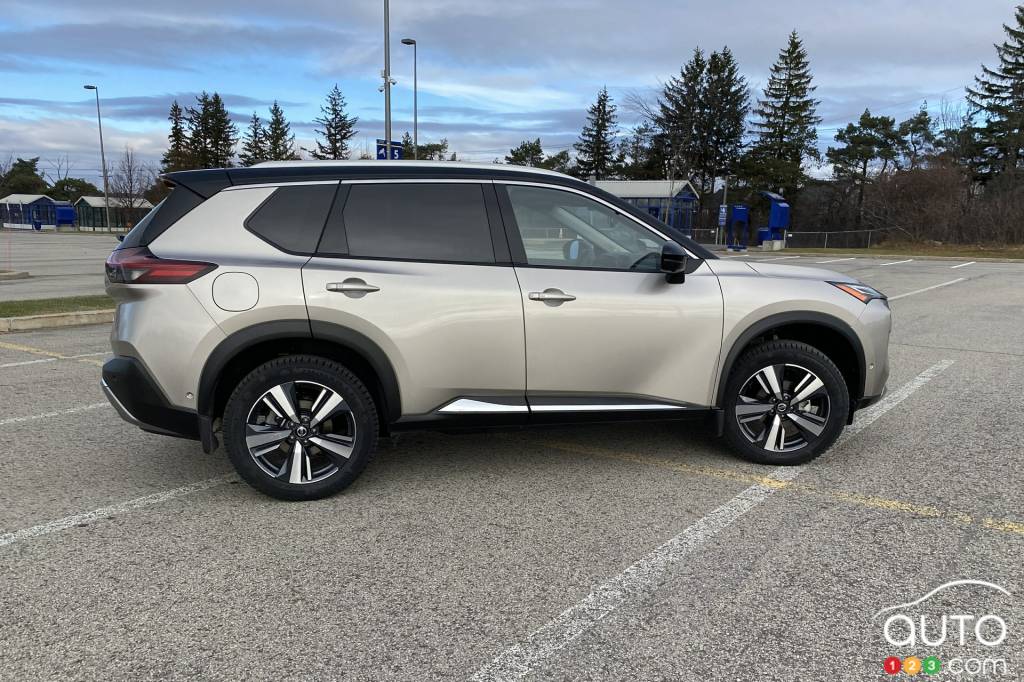 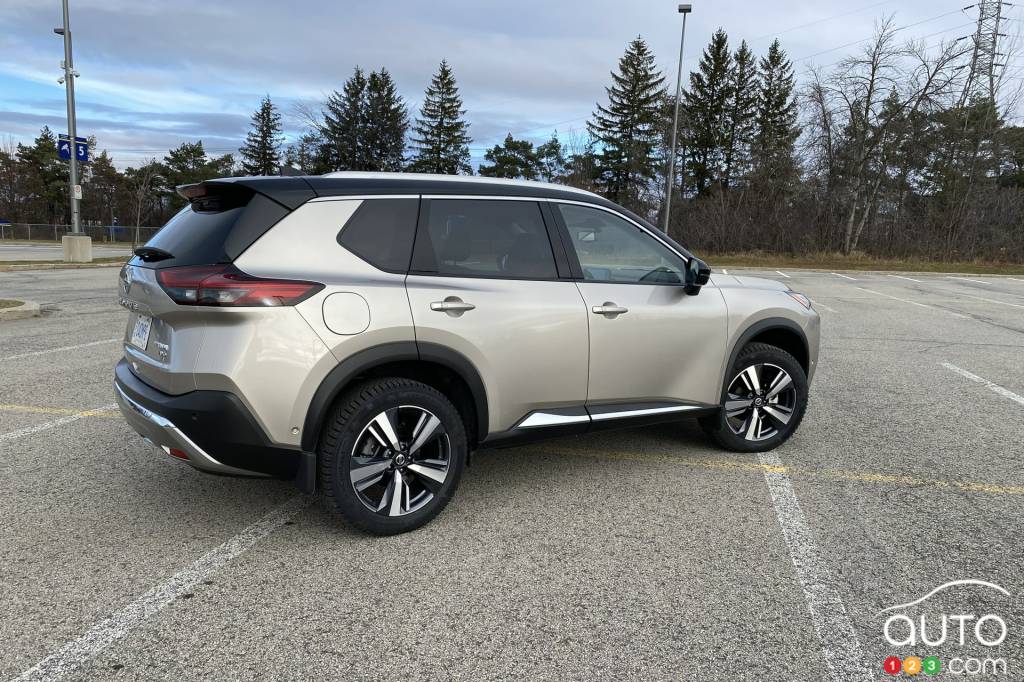 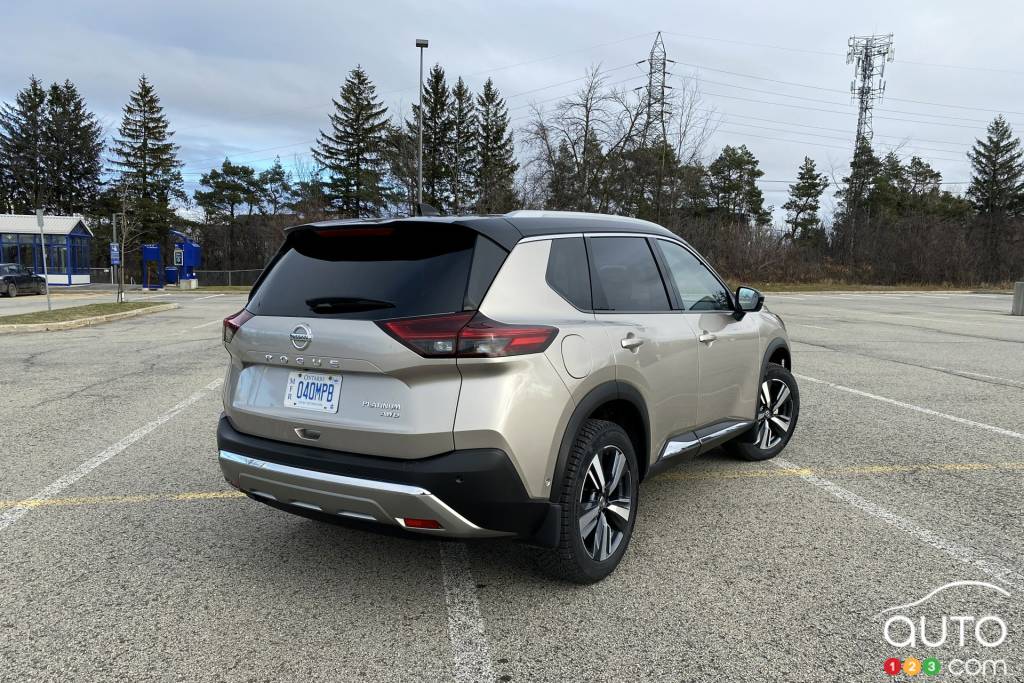 Auto123 finally had occasion to test-drive the new 2021 Nissan Rogue. The exercise allowed us to discover a new generation that is vastly improved and can no...