When it comes to Toyota hybrids, the Prius is the model that immediately comes to mind. And often, the words that follow are, "I don't like the look", "it's ugly", "Toyota could have made more of an effort", etc. But while its appearance doesn't please everyone, once you taste its frugality, its decent range and its pleasant, roomy interior, you tend to shelve styling concerns.

When it comes to looks, the Corolla has fared better over the years, plus it has the merit of having survived the decades and still being offered for sale on several continents. Respect!

Despite all this, it’s generally perceived as a dull car to drive, good for getting from point A to point B, and appreciated for being reliable, affordable and economical. Regarding this last point, Toyota thought it could do even better by adding a hybrid version to the range. There are no less than eight variations of this model. Starting at $21,519 with a 6-speed manual transmission, the Corolla model tops out at $31,119 fully equipped. The hybrid version we drove starts at $27,259. The exterior
At the front, you'll immediately notice the J-shaped LED headlights with a slightly gaping grille in the middle; which reminds me, be careful when parking. On the sides, a small "Hybrid" statement on the top of the front fender. At the rear, almond-shaped LED lights linked together by a reddish, non-illuminated strip. The overall styling of this Corolla is not unpleasant to look at. The interior
Once on board, you find the essentials. The first thing that catches the eye is the 8-inch screen sitting atop the centre console. Just below that, the controls for the automatic climate control (one zone). A little lower down is the wireless phone charging station (available with the Premium Package), the two-setting heated seats and the gearshift lever with the different drive modes.

In front of the driver, a 7-inch TFT screen also catches the eye. It’s easily adjustable thanks to the various controls on the steering wheel. The whole thing is intuitive as behooves a mature model like this, and you can find your bearings right away.

There is one detail that could use looking at by Toyota’s designers, though: when it comes time to physically connect your phone to use Apple CarPlay, you have to look a little to find the right USB port. There's one in the centre console and another well hidden under the dashboard, to the right of the wireless charging pad.

Other interior features auto-up/down power windows in all seats, which is actually a thoughtful inclusion by Toyota. Many much more expensive cars still don't offer this kind of functionality. 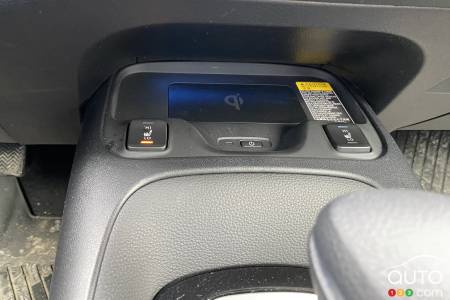 The drive
As soon as you get behind the wheel and head on down the road, you notice how smooth the ride is. In fact, even though this is a hybrid car that switches from all-electric to combustion engine mode, the action happens without the driver noticing unless they’re really focused on it, and the feeling of comfort remains.

The car responds well to the steering, and you go through turns smoothly and confidently. Yes, some will say that cars like this one are devoid of feel, but we're sure most Corolla buyers will want to buy one precisely because it inspires confidence and safety.

And on that note, the Corolla is equipped with Toyota Safety Sense 2.0 technology. That means you get all the necessities and most of the wanna-haves when it comes to safety, including adaptive cruise control, lane departure warning (with a beep first, followed by slight steering correction movements), lane keeping assist, automatic high beams and a pre-collision system with pedestrian detection. Other standard safety features include a blind spot monitor with rear cross-traffic alert and 10 airbags. 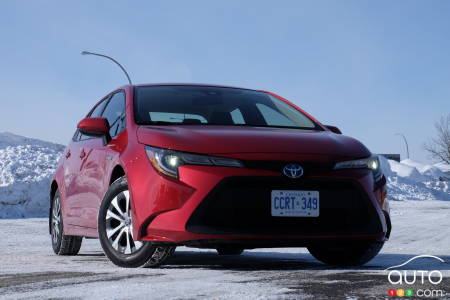 Mechanically, the Corolla Hybrid has 121 hp to move it forward. Nothing to brag about to your friends! Except that, in reality, the 1.8L 4-cylinder engine, aided by an electric motor, gives you the impression of having more under the hood. All of this is aided, or hindered, by a CVT (continuously variable transmission), on which it’s not worth dwelling. It does its job adequately, but nothing more.

Overall, the official combined fuel consumption is 4.5L/100 km. Note that in winter, with temperatures as low as -15 Celsius and a snowstorm during our test week, we achieved a combined average of 6.0L after driving just under 500 km, which is not bad at all. It would be interesting to try this vehicle again in the summer to see if we can at least get close to the official figures. Remember that the non-hybrid version consumes - officially - 7.1L/100 km. 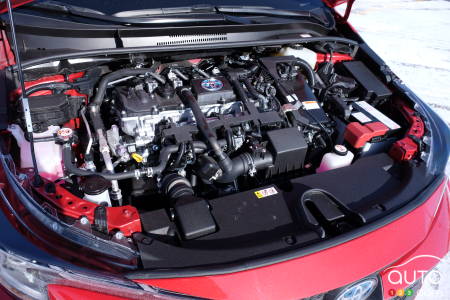 Another detail worth mentioning: there are three drive modes with the Corolla hybrid: Normal, ECO and Power. We used the Normal mode all week, as we found it to be the most discreet. The ECO mode makes the vehicle truly woeful on the road because power is so limited. We only used this mode once, during a snowstorm, in order to avoid unnecessary spinning of the front wheels during acceleration. Power mode livens up the vehicle, but the trade-off is that the engine is more vocal, in part due to the CVT of course. So, for the overall comfort and for the sake of everyone's eardrums, Normal mode is the wiser choice.

As for braking, with this Corolla hybrid, it took a bit of time to get the proper feel of the pedal. The brakes seem to delay working and then bite suddenly, resulting in a jerky feel. This is due to the transition between the regenerative brakes, which allow the battery to be recharged, and the mechanical brakes.

The versions
There is only one hybrid version. For $27,259, you get the aforementioned safety systems, automatic climate control, heated front seats and, of course, Apple Carplay and Android Auto apps. For an additional $2,000, with the Premium Package, you get the 8-way power-adjustable driver's seat, wireless smartphone charging, heated rear seats, heated leather-wrapped steering wheel and Softex leather seats. 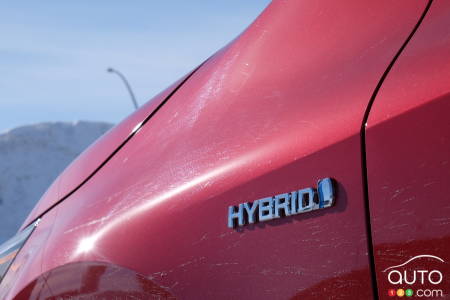 Conclusion
Overall, while there's nothing particularly extravagant about the Corolla Hybrid, it's a pretty attractive little car, and it delivers a lot for the price, which crucially is one of the lowest for a hybrid product on the market. Fuel consumption, comfort (for the price paid), spacious interior and all the technology on board are all elements that argue in its favor. If you’Re looking in this segment, this is definitely short-list material.

Fuel economy
Comfort
Technology and safety
Smoothness of the mechanics 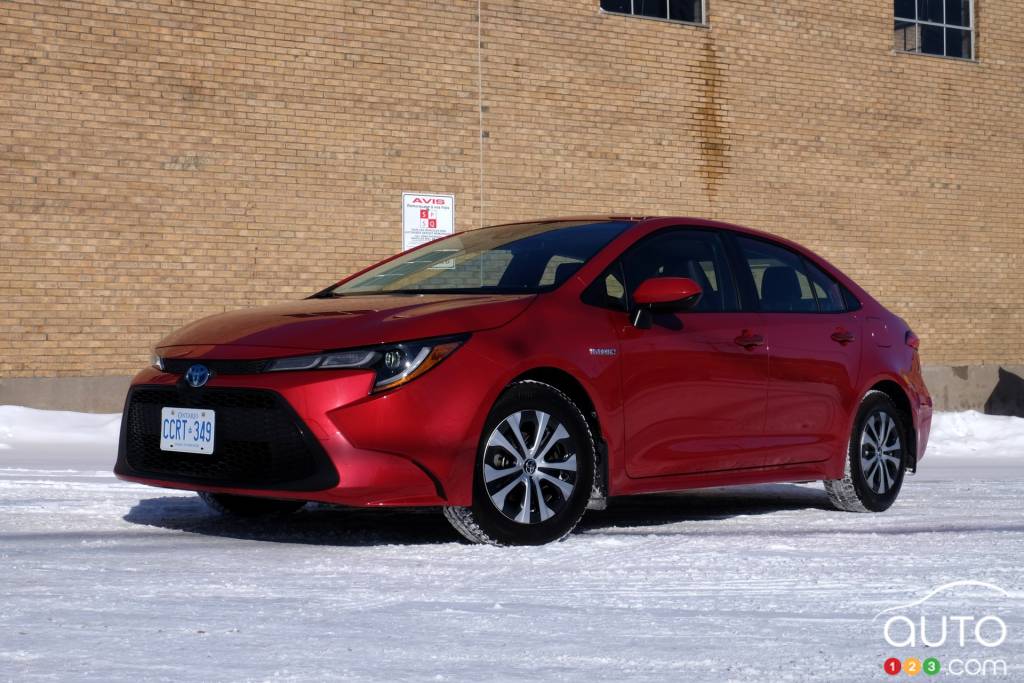 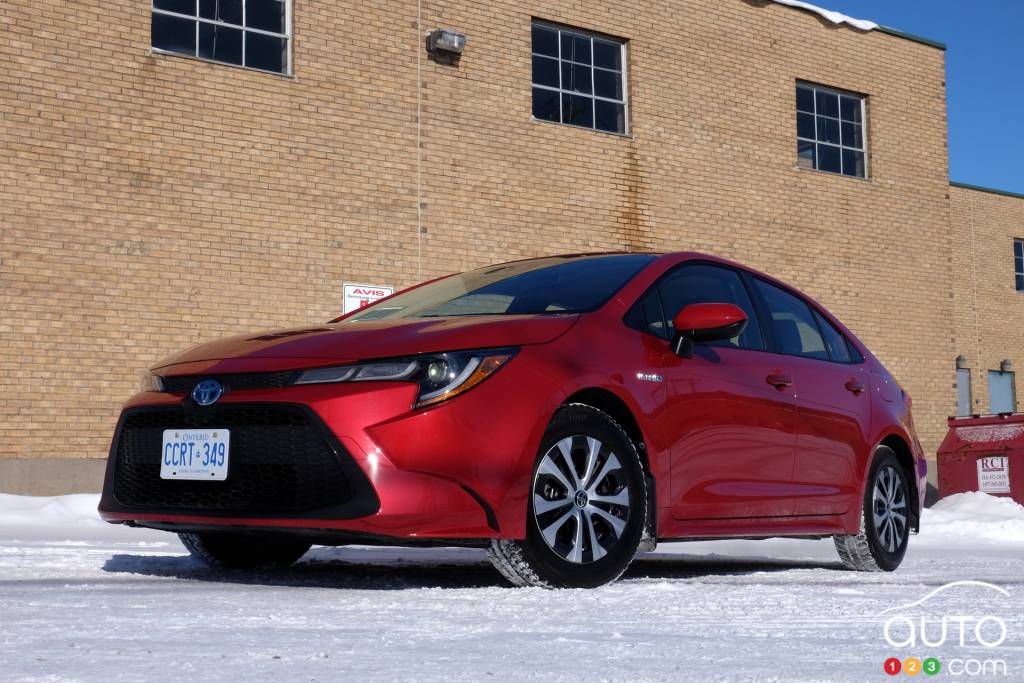 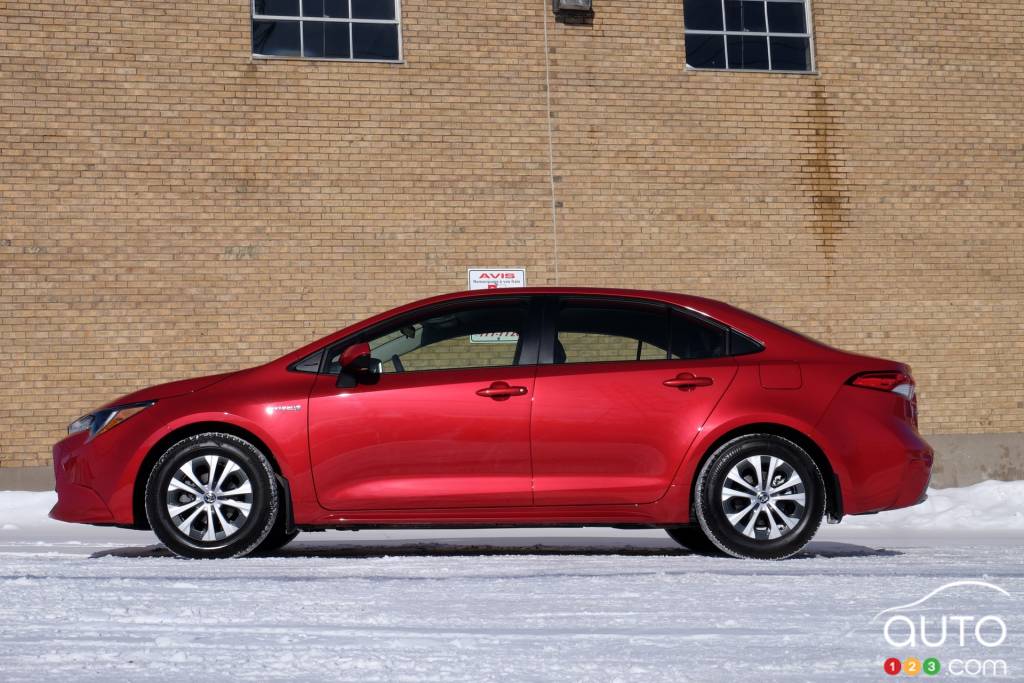 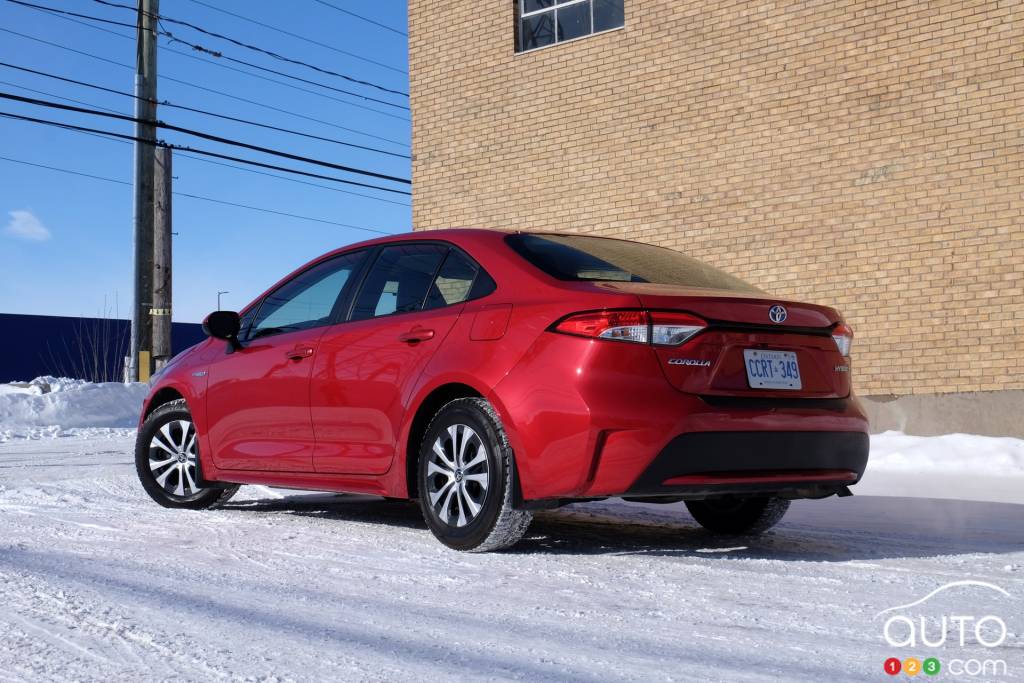 Here's what you need to know about the 2021 Toyota Corolla L manual, its specifications and capabilities. That includes details about what’s new, the model r...