My first contact with the Toyota GR Supra took place back in September 2019. The automaker had provided me with one of the first units available in Canada, and as it happened the road test coincided with one I did of the BMW Z4 M40i, the non-identical twin of the fifth-generation Supra. In case you've forgotten, the German roadster was developed simultaneously with the Japanese sports car, and the two have much in common.

I got out of this impromptu comparison match that the BMW was a slightly more mature choice with its increased comfort and top-quality construction compared to the Supra, which seemed constantly to want to get frisky thanks to that more-delinquent rear end. That first test also highlighted one of the flaws of the GR Supra; indeed, the car suffers from a design problem somewhere between the seats and the trunk. When driving with the windows down, a persistent and grating noise makes itself at home in the passenger compartment, forcing you to roll the windows back up. In short, beyond a certain speed, you have to forget about fresh air and drive with the air conditioning on. What a pity!

There was no Z4 for us to try out this time around, but Toyota did entrust me with a A91 edition of the 2021 Supra, this one equipped with the 6-cylinder turbocharged inline-6 engine. This new edition means, of course, that the 2021 model-year sees the choice of models climb from one to two (GR Supra 2.0 and GR Supra 3.0), with the A91 option adding $1,200 to the equation. The arrival of a version with  4-cylinder turbo engine - also borrowed from BMW, by the way - prompted engineers to add a little spice to the 3.0's right foot. Last year's 335 hp is thus up to 382, with the engine's optimal torque being about the same.

In addition, another element changed the game for this second drive of the GR Supra: the winter tires installed on the car. In fact, the very morning I picked up the car, a thin layer of snow confirmed the wisdom of the automaker in equipping the car destined for the automotive press with snowshoes. Of course, as befitting this most unpredictable of years, that was the only bit of snow I was to encounter during the week drove the Supra, but still, the cooler temperatures at this time of year totally justifies these tires designed with softer rubber.

2021 vs 2020
Last year, despite the difference in power with the BMW Z4 M40i I drove contemporaneously, the 2020 GR Supra wasn’t really outshone. In fact, it was even very difficult to find a winner when assessing acceleration; the Z4 was only marginally better than its hardtop rival. With the addition of extra power for 2021, the GR Supra 3.0 has only gotten more appealing.

I should also point out that for $1,200, the A91 option is really a no-brainer of a choice. Everything it adds, from the added rear spoiler, 19-inch matte black wheels, carbon-fibre mirror caps that look great on a black exterior, matte black decals on the rear fenders and Toyota Supra Connect system, to the blue-tinted stitching on the Alcantara seats and the exclusive trunk carpet inside, adds to the allure, and frankly you'd be crazy to do without it! Yes, I know, not everyone likes black cars... or the added bling. But still, this is a mighty fine-looking trim.

An authentic sports car
I won't reopen the debate on whether or not the GR Supra or even the Z4 roadster might eventually get a six-speed manual gearbox, a bit of equipment that is offered in other markets, by the way. Because there’s frankly no debate to be had: as of now, both automakers say they have no intention of offering the manual transmission in North America, with any of the available powertrains. In any event, the 8-speed automatic transmission does a remarkable job day in day out, especially in urban driving where this type of transmission is appreciated for its smoothness.

At the same time, when it's time to boost the adrenaline levels, the automatic unit is able to keep up with the pace, whether it's during acceleration, when the gears follow each other right quick, or even during deceleration, where the downshifts are more effective than you might expect. Maybe not as effective as a dual-clutch box might be, but still mighty fine.

Sink your right foot into the floor, and the edge of the legal speed limit is reached in less time than it takes to say “2021 Toyota GR Supra 3.0 A91 Edition”. Indeed, you’ll be wise to be vigilant, because the Supra is still as delinquent a character as before, with the rear axle itching to pass in front at the slightest moment of inattention - if, of course, the traction control system is deactivated. With winter tires, that restlessness is muted somewhat, but it's still possible to send the rear axle swinging.

The steering is precise and heavy (but not too heavy) and gives good feedback as to the condition of the road.  Purists might wish for an M-division-type steering wheel for better grip. The driving position is also exemplary, although a little more support from the seats would, like that steering wheel, be welcome. And then there's the sound so typical of BMW's inline-6 engines, with their exhaust system that enjoys a bit of backfiring when you’re shifting gears.

Where the Supra’s engineers really did their best work is in regard to handling. The GR Supra 3.0 is uncommonly capable of holding its own on a twisty road, even with winter tires. And the beauty of the thing is that this handling is not achieved at the expense of comfort. It very much calls to mind a number of other models badged BMW, a manufacturer that has long mastered the art of preserving both qualities side-by-side.

The last word
I found no reason to feel disappointed in my second go-around at the wheel of the GR Supra. The sportiest Toyota in the lineup has no reason to envy the other sports cars in the industry – although we can always wish for a manual transmission, because we know how excellent BMW’s boxes are. Sportiness and comfort live side-by-side in harmony in this car, and driving pleasure is part of the history of this fifth-generation Supra, Germanic in origin as it is. The only thing missing from my test drive was a good drop of snow on the roads. Maybe next time!

The deafening sound when the windows are lowered
Not as many drive modes as in the Z4
No manual gearbox (!) 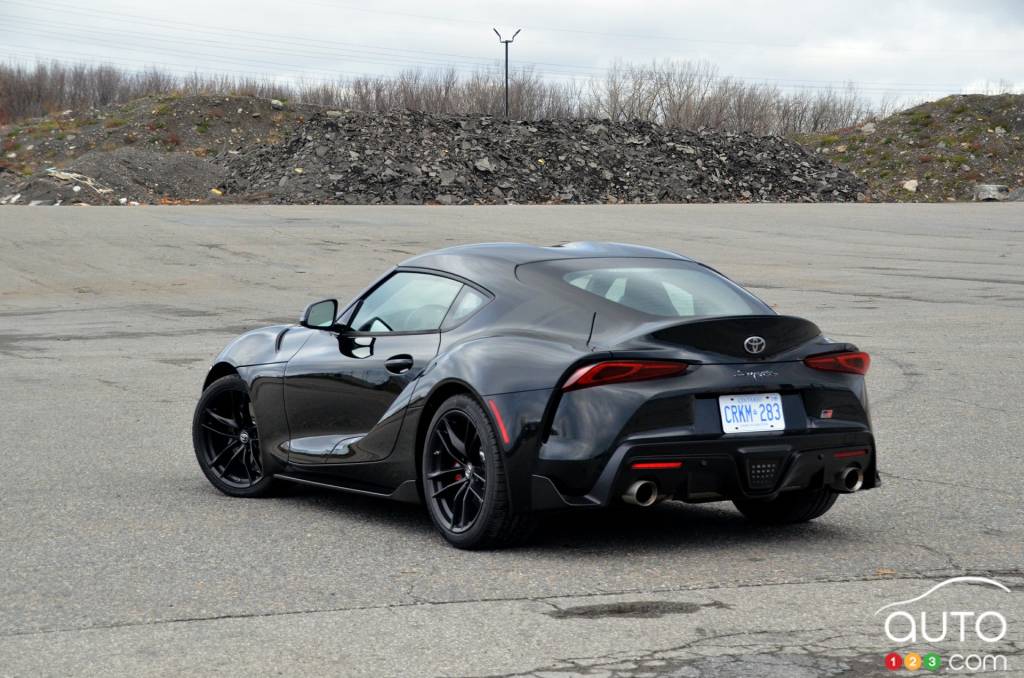 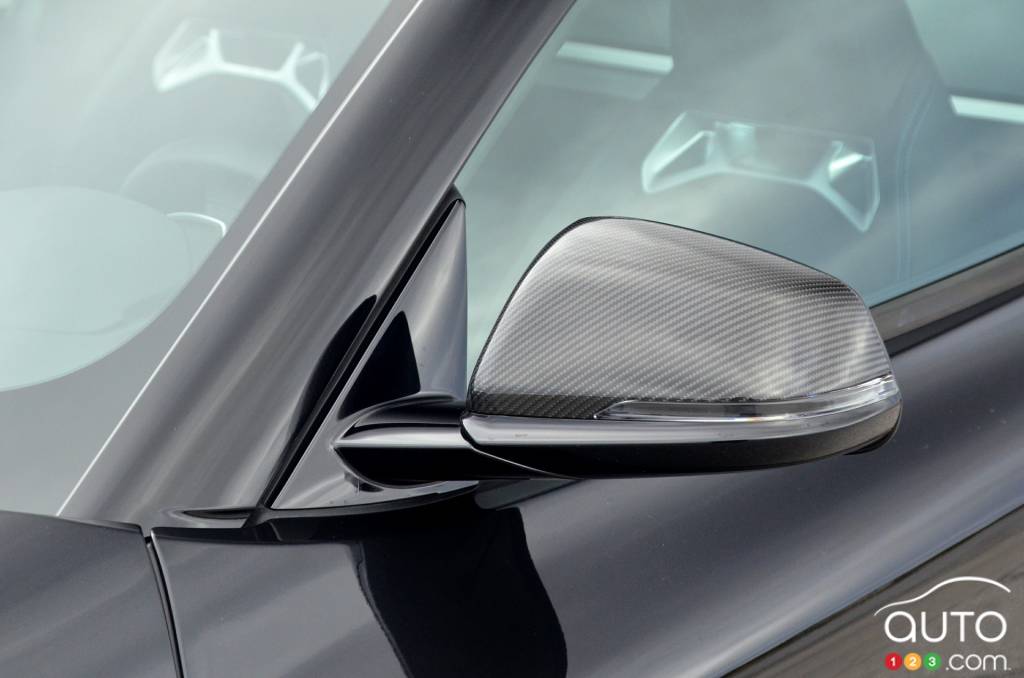 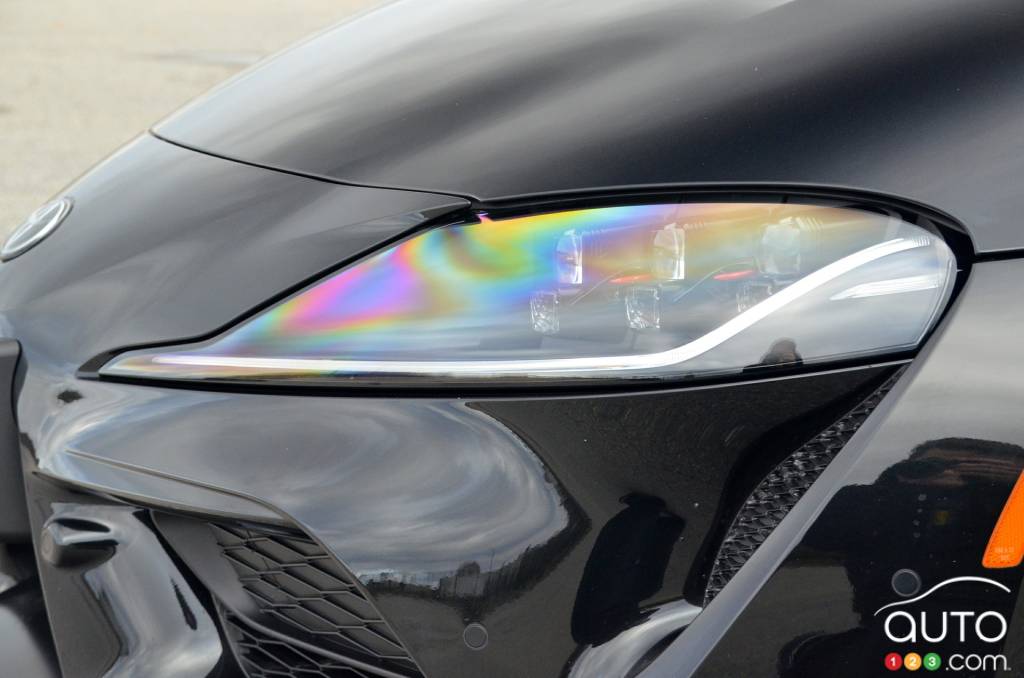 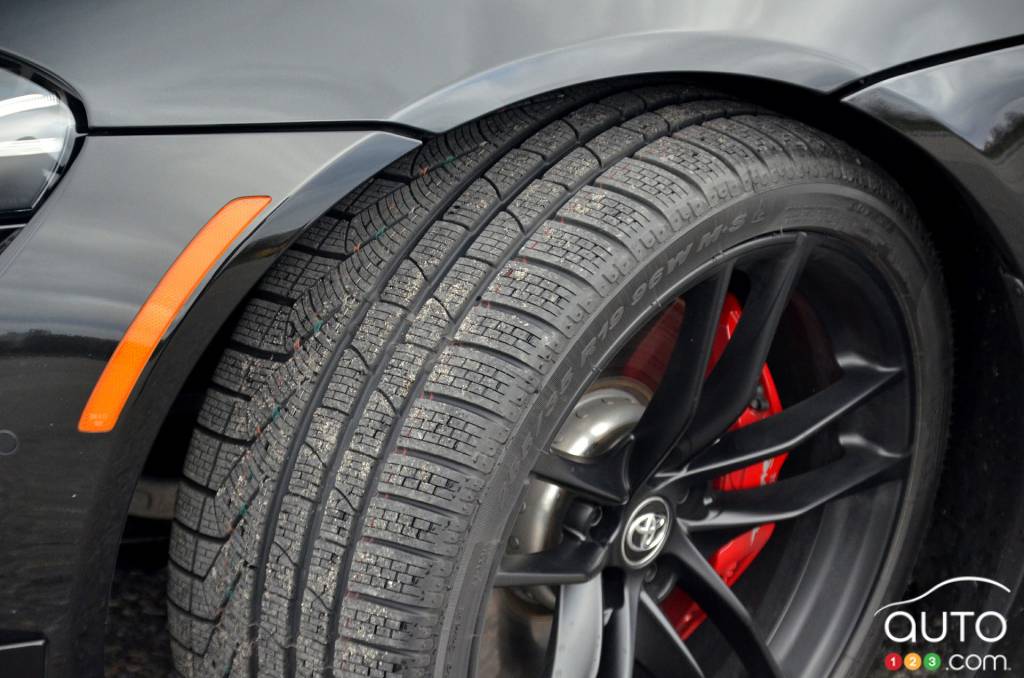