OK everyone, quick: how many compact all-wheel-drive compact sedans from non-luxury manufacturers can you buy in Canada today?

Think about it. Take a second.

The answer to my question is an emphatic “two”: the Mazda3 and the Subaru Impreza/WRX/STI triplets, which are really just variations on a single theme.

Of course, Mazda may be a mass-market carmaker, but since they don’t have a luxury arm like Honda does with Acura or Toyota with Lexus, they need the top trims of their models to hopefully steal a sale or two away from the other guys’ luxury brands.

So it goes that for 2021, Mazda is releasing a turbocharged AWD version of the top GT trims of their venerable Mazda3, both in sedan and Sport hatchback forms. GT-spec means it gets just about every feature Mazda currently has at its disposal: leather seats, Bose audio, moonroof, heated steering wheel, navigation and the latest in Mazda infotainment tech which includes a great new high-definition backup camera, Android Auto and wireless Apple CarPlay support. 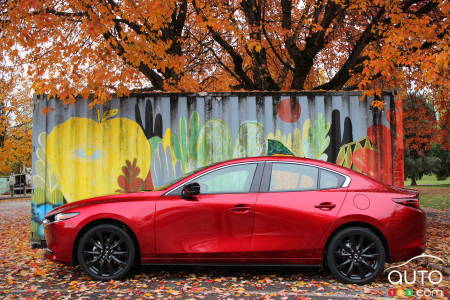 NOT a Mazdaspeed3
Of course, Mazda has done the turbo 3 thing before, though for that you do have to look all the way back to the Mazdaspeed3 last seen in 2013. Mazda, however, is adamant that this latest take on turbocharging the 3 is not to be taken as the rebirth of the Mazdaspeed3.

“The Mazdaspeed has a very intense characteristic,” said Jay Chen, manager of powertrain and performance at Mazda R & D. “We are trying to deliver a driving experience that’s more appreciable every day. You don’t have to wring it out to get some driving pleasure. You’ll have that most of the time.” Indeed, it’s Acura and Audi that Mazda has in its sights with this, not VW or Hyundai. So they say. 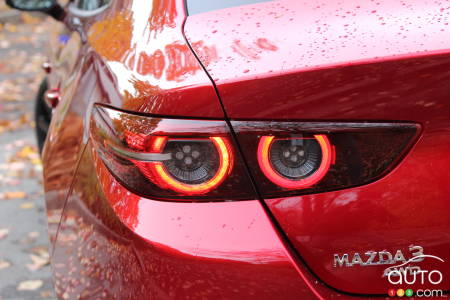 This 3 Turbo is actually a more refined take on the genre, which is why you don’t see huge aerodynamic add-ons (the Sport, however, gets a slightly more aggressive front fascia and rear wing option), and you don’t have the massive hood scoop the Mazdaspeed3 did. Really, the main stylistic differences between the Turbo and other Mazda3 models are some slightly larger tailpipes, black 18-inch wheels and black wing mirrors.

So what about the competition, then?
The Audi A3 makes less power but costs more, while the S3 still makes less power for even more money. Then there are the Mercedes-AMG CLA 35, Cadillac CT4-V and BMW M235i Gran Coupé. In order to get a compact equaling or besting the Mazda3 Turbo’s 227 hp and 310 lb-ft of torque (250 and 320, respectively, if you fill up with premium), you’re into the high-$40,000 or low-$50,000 range; even the Volkswagen Golf R - the gold standard when it comes to turbo’d AWD compacts - won’t be leaving the showroom for much less than 50 grand when its new edition arrives next year. 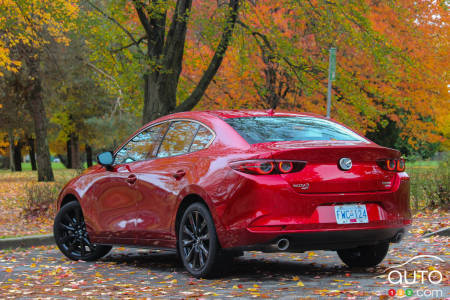 It takes some time to come around to the notion of the Mazda as a cultured product above all else, though, because this is one seriously fast, able-handling and altogether ultra compact sedan. Power is dispatched lickety-split from tip-in, with peak torque arriving at a lowly 2,000 RPM and peak power arriving an additional 3,000 revs past that. So, you get some great low-end grunt as you ride that torque wave, with peak hp arriving a little later on to give that extra oomph when the turbo comes on boil.

The car gets a pair of paddle shifters, with each tug resulting in a quick cog-swap. No question, this 3 is monstrous in a straight line and makes itself heard while it’s at it. The exhaust note’s a nifty cross between the off-beat burble of the WRX’s flat-four and the Golf R’s straight 4-banger. What’s that about this not being a Mazdaspeed model? Sure sounds like one to me.

That said, to make it sound like something a little more manic than advertised, you have to make it happen. Otherwise, the word I kept coming back to was “refined”, because beyond all that full-throttle whizz-bangery, Mazda’s intentions for the 3 model begin to shine through. The ride is way more predictable and insulative than the power and its compact digs suggest, while the handling manages to be sharp and precise without necessarily feeling too sharp-edged.

A lot of that boils down to Mazda’s clever G-Vectoring system. Essentially, what G-Vectoring does is as soon as the system senses some steering input, a little power is taken away, which moves the weight forward and provides more grip to the front wheels. So, turn-in is quick but at the same time, body roll is controlled and energy put to better use spiriting you down the road. 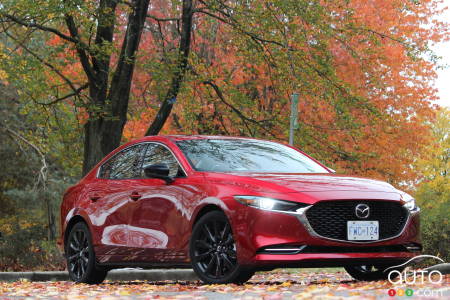 The steering, though – and I’m as surprised to be writing this as I was when I first experienced it – could use a little more feel. I I found myself guessing how much lock to input for certain turns and having to adjust mid-turn more than I’d like. Indeed, it behooves Mazda to ensure a little off-centre dead zone exists because any “refinement” they’ve worked to achieve would take a bit of a hit if the steering were too nervous. That’s fine, but I just think they went a little too far.

There’s little else to complain about here, though. Sure, the lack of a third-pedal option does stick in my craw a bit, especially considering that Mazda’s reasoning for that is basically that a manual gearbox would be a little too hardcore – a little too Mazdaspeed-like – for the 3 Turbo. I’m sure there are plenty of potential buyers out there who would love a manual option, but according to Mazda, not enough for a business case to be made. So that ship has sailed and there’s no point in lamenting too much about it.

Rather, you’d be better off to just take the Mazda3 Turbo for what it is, and that’s an extremely powerful and fun-to-drive little runabout that punches way above its pay grade. Hard not to love it. 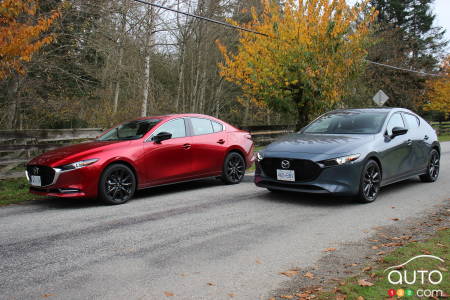 Some numb steering
Tight back seat
No manual option 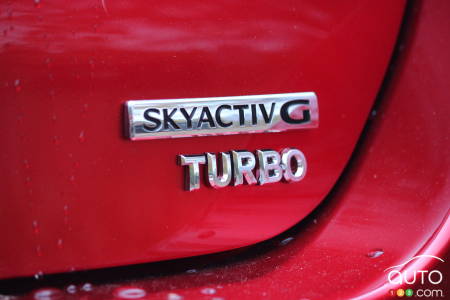 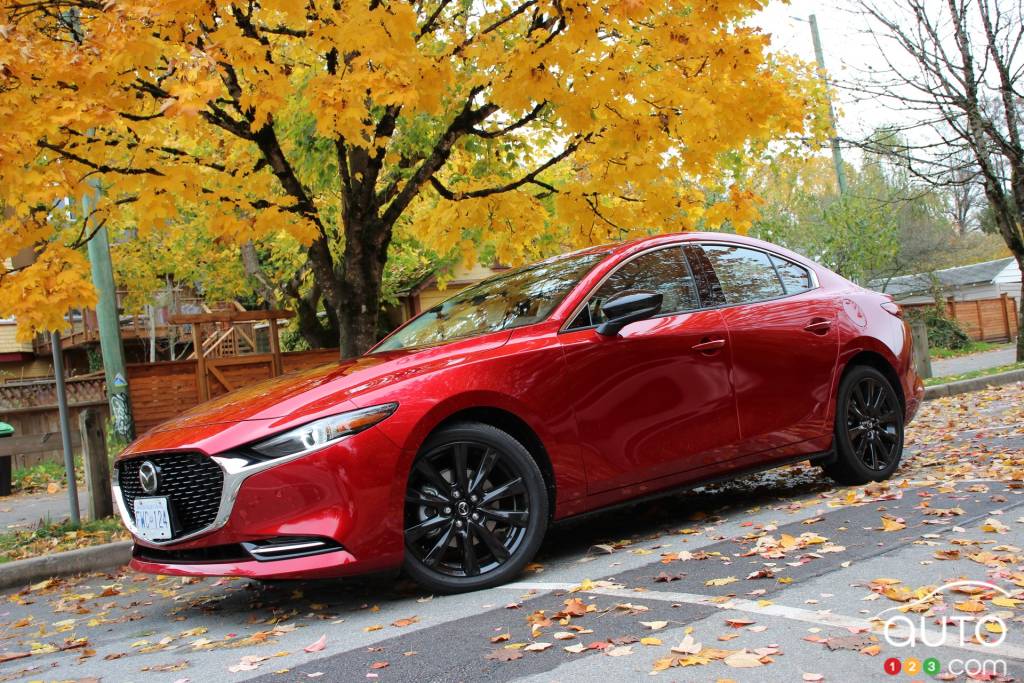 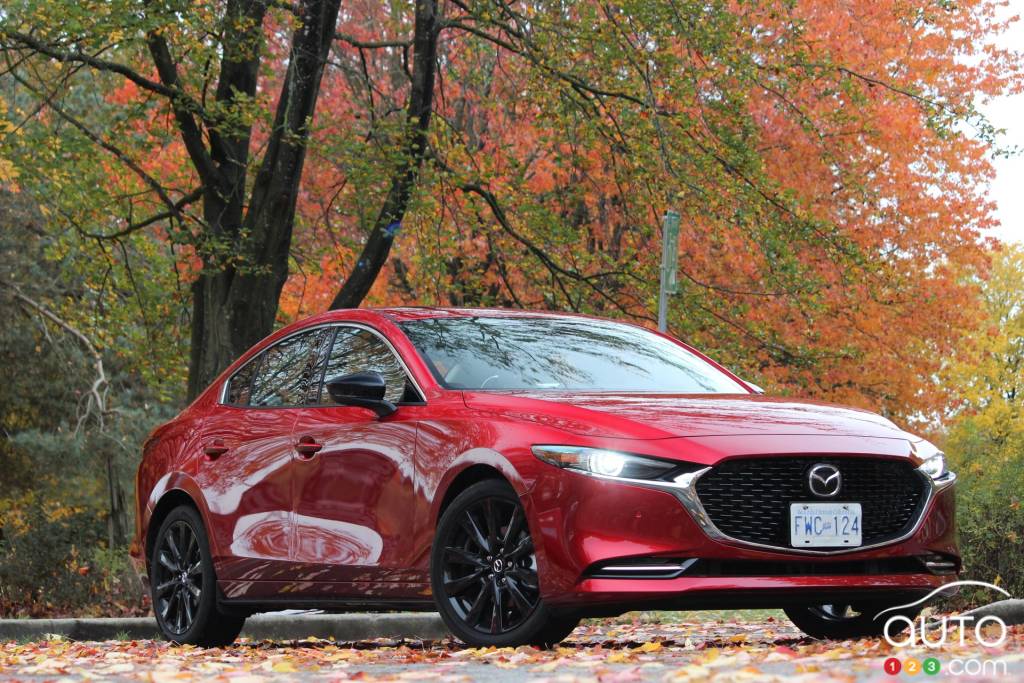 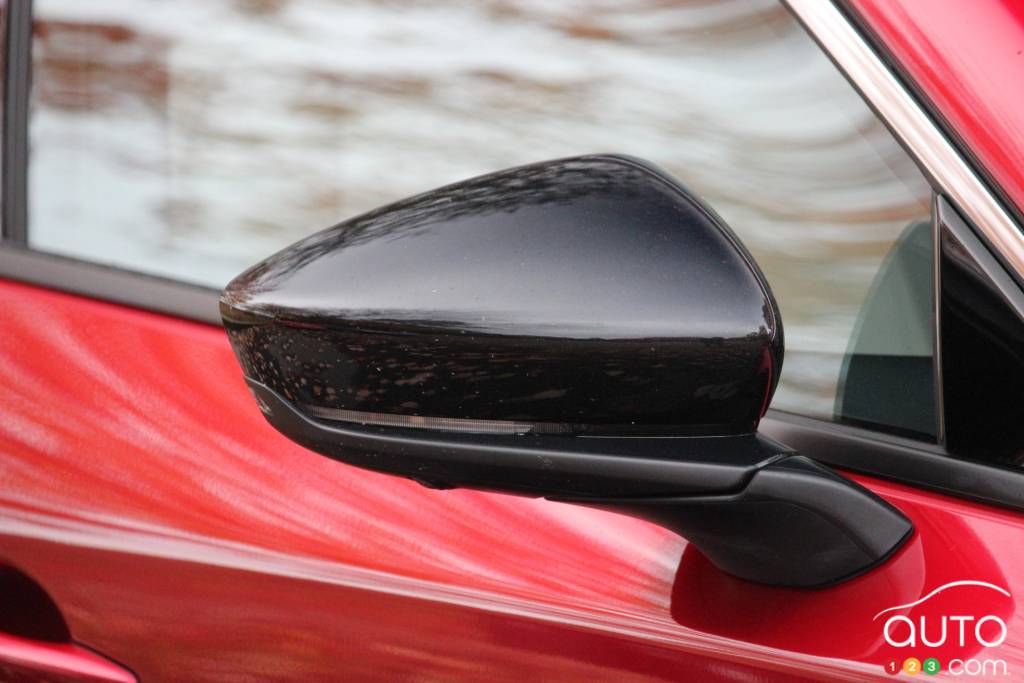 The turbo version of the Mazda3 is scheduled to make its official debut a little later this week, but it's already shown itself in Mexico. As many had predic...

Mazda is planning to fit its 2021 Mazda3 with a turbo engine, according to an anonymous source who spoke with the Jalopnik website. The turbo engine would be...

The 2022 Mazda3 GT is a well-appointed version of the little 3 sedan that suffers not at all from the absence of a turbocharger. Here’s our review.