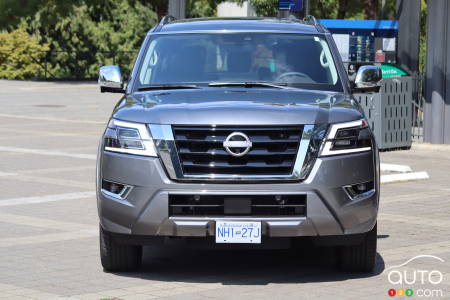 •    This vehicle is a testament to what still can be achieved with a robust chassis and good ol’ school V8 power.

The Nissan Armada continues to soldier on as one of the elder statesman of the full-size body-on-frame SUV world. It’s got a proper truck chassis shared with the desert-beating Nissan Patrol, a naturally-aspirated 5.6L V8 from the Infiniti QX80 luxury truck and styling that leaves very little to the imagination.
As in, it’s all about the big chrome: big, chrome grille surround, big, chrome wheels, big, chrome wing mirror covers that are so reflective they could be used as mirrors themselves and big, chrome Armada script across the back. Even those huge headlamp lenses wouldn’t look out of place on a class 8 big rig.
It's a vehicle that does make a statement on the styling front when it comes to presence – if you’re in the vicinity of this truck, you know it. It’s a big, heavy-metal SUV that just by looking at it, you’ll know it can take most everything you throw at it. 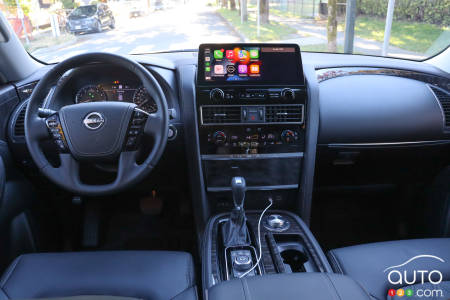 Photo: D.Heyman
2022 Nissan Armada - Interior
Inside, that image changes a little. Things are… softer, and especially in Platinum spec seen here, it gets goods like leather seating with white contrast stitching, wood inserts, heated and cooled front seats, digital rear-view mirror (more on this in a minute). Also a big 12.3-inch infotainment display with wireless charging, Apple CarPlay and Android Auto and surround-view parking monitor whose top-down view is really helpful in a big vehicle like this.
Frankly you would never guess from looking inside the Armada that you’re in a truck that shares many of its bits with military-grade vehicle like the Patrol. Things are nice, and on the surface you wonder how its QX80 twin could move the goalposts any further than this.
Looking a little closer does reveal that the Armada is not the most luxurious version of the platform. The leather is not of the same grade and appears pulled a little too tight in some areas; the lighting isn’t quite as robust and it’s just a little louder. It doesn’t ride quite as smoothly.
With that tall roof, it should come as no surprise that headroom both front and rear is ample. Even with the sunroof on my tester, I had not problem porting a baseball cap as I sat. Heck, I probably could have been wearing a 10-gallon hat in there and had no problem. Same goes for the back seat. With up to 233 mm of ground clearance, the Armada has a tall floor, but they’ve made it so it doesn’t affect headroom as much as you might think. 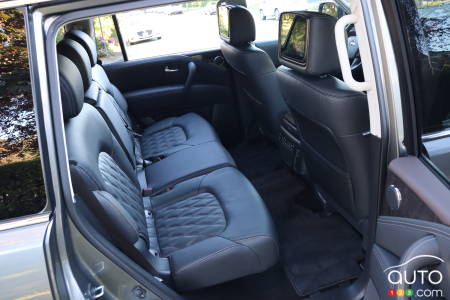 Photo: D.Heyman
2022 Nissan Armada - Rear seats
I’m less enamoured with the rear seat legroom, which is snug, though the way the second-row captain’s  chairs on my tester (other models get a bench for a total of eight seats) fold and tumble forward provide easy access to the third row. Which, by the way, isn’t too bad for adults and comes equipped with four cupholders.
The third row does compromise the amount of cargo space you have in the rear - blame that tall floor. As a result, a family camping trip had us loading the rear right to the very top (as well as the shallow underfloor storage bin), which is where the digital rear-view comes in.
Since its camera sits outside of the Armada, it doesn’t matter how tall you load your wares behind you (or how tall your second- and third-row passengers may be), because your view the rear-view is never compromised. It also allows for a wider view out overall as you never have to deal with the rear window frame and no matter who’s driving – your spouse, your son/daughter, your dog – the mirror never has to be adjusted because the view out is always the same. 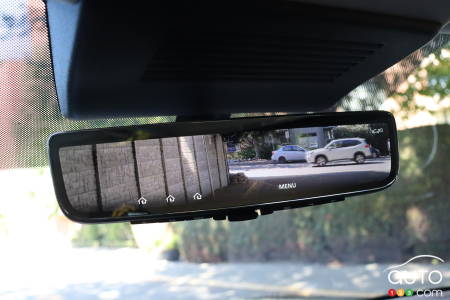 Photo: D.Heyman
2022 Nissan Armada - Car mirror
I do admit, however, that in low-light situations, I prefer a traditional mirror, because I don’t like grainy images and I don’t like approaching vehicles to appear simply as two orbs of light. Fortunately, you can swap between the two by flipping what has historically been the dimmer switch.
Other interior aspects are generally impressive. The 13-speaker Bose sound system is clear (though not my favourite OEM when it comes to in-car audio), and while the native infotainment interface is eclipsed in functionality and appearance by a lot of the competition, the touchscreen is responsive enough so Apple CarPlay is fully functional and it’s what I stuck with for the duration. 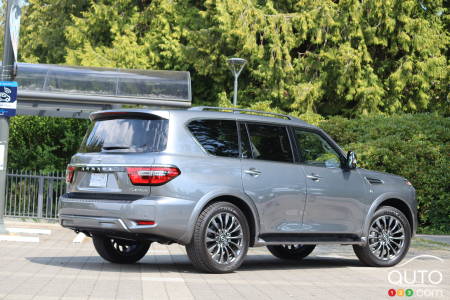 Photo: D.Heyman
2022 Nissan Armada - Back
Power is rated at 400 hp and 413 lb-ft of torque, and it gets sent to the wheels via a 7-speed auto transmission. It’s not the most advanced powertrain – there’s no turbocharging or supercharging, no 48V mild hybrid additions – but it is a robust one that does as good a job that it can to try and disguise the Armada’s hefty 2,742-kg curb weight in Platinum spec. It’s got a throaty report as you accelerate, though, sounding as a proper V8 should. It also helps the Armada achieve a 8,500-lb tow rating.
Those are all just numbers on a page, though. I just really like the feel as soon as you set off in the Armada. It feels incredibly robust and ready to tackle anything and is proof positive that you don’t necessarily need the technologies mentioned earlier for a fully functional truck.
In fact, sometimes, they may even serve as a bit of a distraction. I’ve driven one of the Armada’s top rivals, the Chevrolet Tahoe, and it has a cylinder deactivation system. The gauge cluster lets you know how many cylinders you’re using and I found myself constantly checking in on that as I drove, to make sure I knew what was going on. What’s the point, really? They obviously want you to check it because why else would they have included the feature, but just get me the throttle and transmission response I need and be done with it. With the Armada, you select drive and you’re off, no muss, no fuss and it’s going to get the job done. 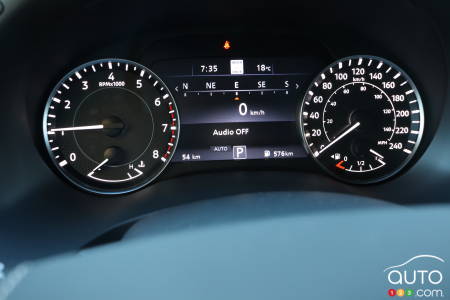 Photo: D.Heyman
2022 Nissan Armada - Date screen
Now, the 16.9L/100 km of fuel usage in the combined cycle I saw during my test isn’t spectacular by any means, but the Armada gets a big 98-litre tank and runs on regular fuel, which is a nice benefit of a naturally aspirated engine.
When it comes to ride, the Armada suffers the usual pitfalls of having a body crowning a chassis, so you get stiff response over repeated bumps and some wafting ‘round corners (its height doesn’t help in this regard), though the dampers have been tuned to provide a perfectly comfortable ride in most situations.
While the V8 grunt is appreciated when on the road, going off-road is a bit of a lo-tech experience. There are no locking differentials and no limited slip differentials, for example. There is a hill-descent control system as well as vehicle dynamic control that helps control wheel slip under braking.
Add 4H and 4L settings as well as a snow mode and while it may not have the off-road variety as, say, an Expedition but darned if it doesn’t feel plenty capable off the beaten track in spite of all that. Maybe it was my knowledge about the Patrol connection, but I felt fully in control and confident in the light off-roading I did (and, if we’re honest, that most Armada owners will do), which does the trick. 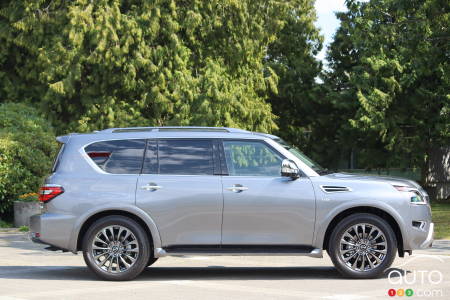 Photo: D.Heyman
2022 Nissan Armada - Profile
In the end, the Armada stands as a living testament at what can be achieved – even this day in age – with a robust chassis and good ol’ school V8 power and offering little more than a cursory glance into the world of autonomous driving, off-road cruise control and so on. It’s an honest, practical vehicle and like a naturally aspirated muscle car or a drop-top sports car than can be had for less than a king’s ransom, it’s becoming less and less common in the world today. There’s something to be said for the uniqueness that kind of rarity provides.
We like
Robustness
Interior niceties
Digital rear-view mirror
We like less
Cargo management
Thirsty
Some interior comfort issues
The competition
Chevrolet Tahoe / Suburban
Ford Expedition
GMC Yukon / Yukon XL
Hyundai Palisade
Jeep Grand Cherokee L / Grand Wagoneer
Kia Telluride
Toyota Sequoia 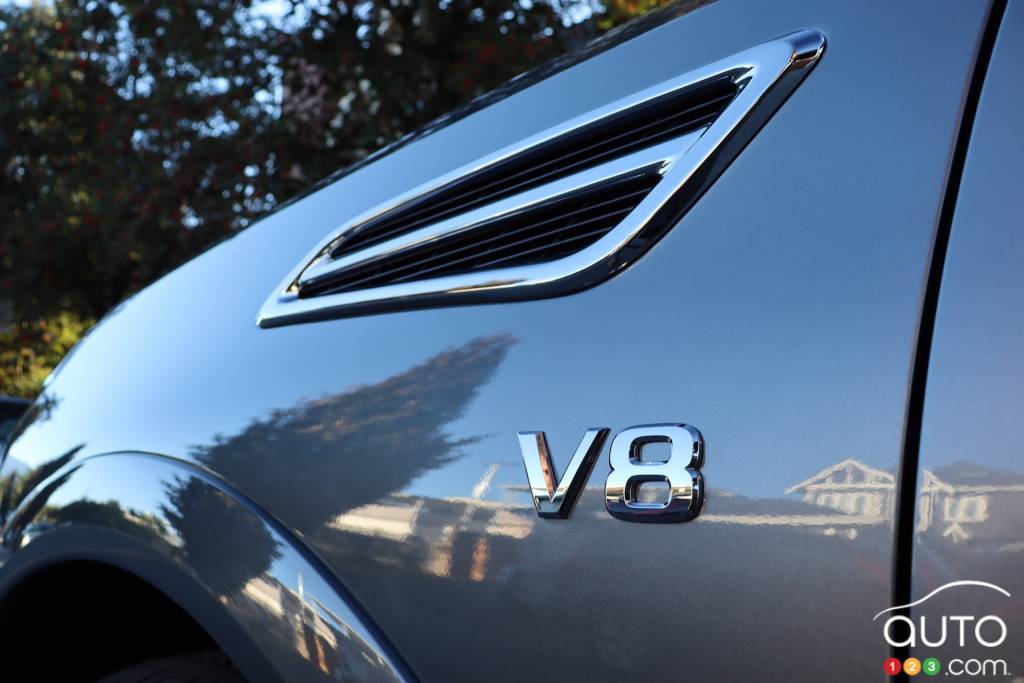 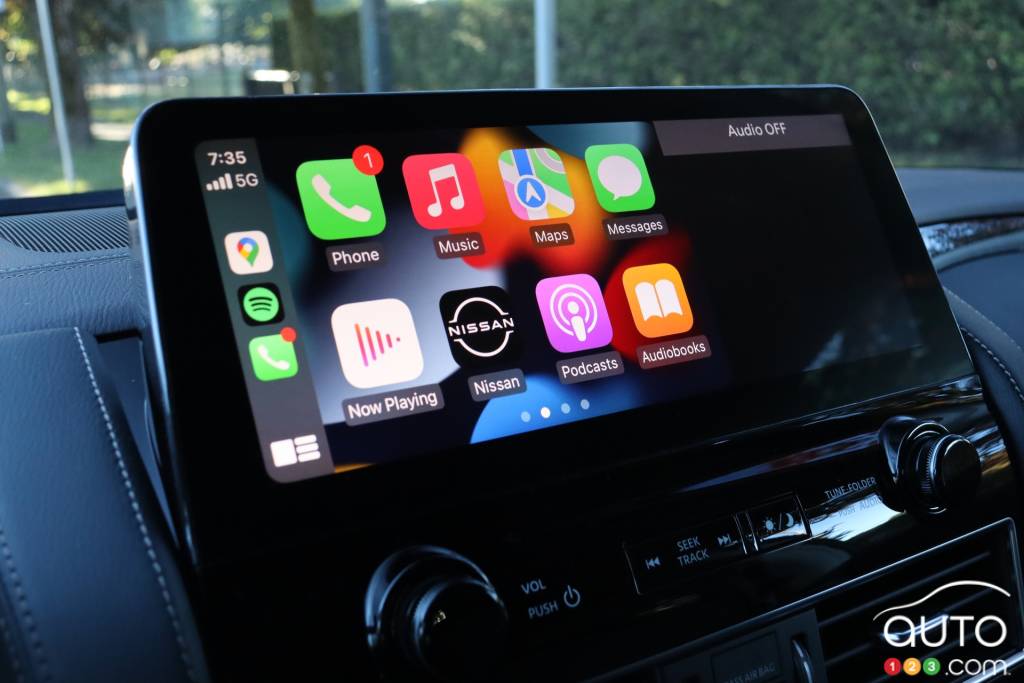 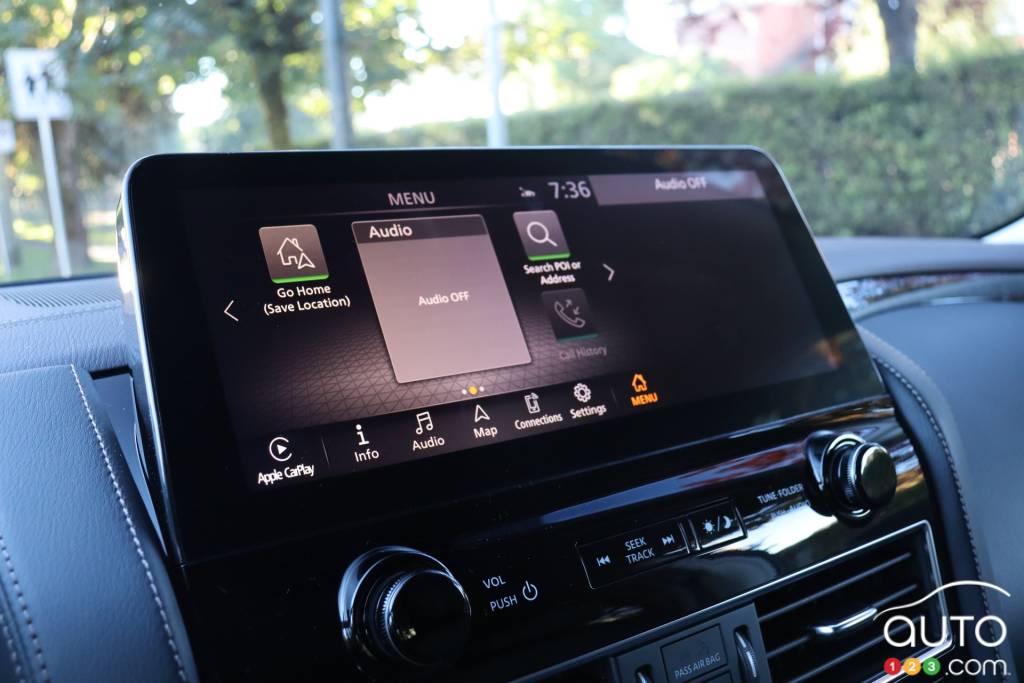 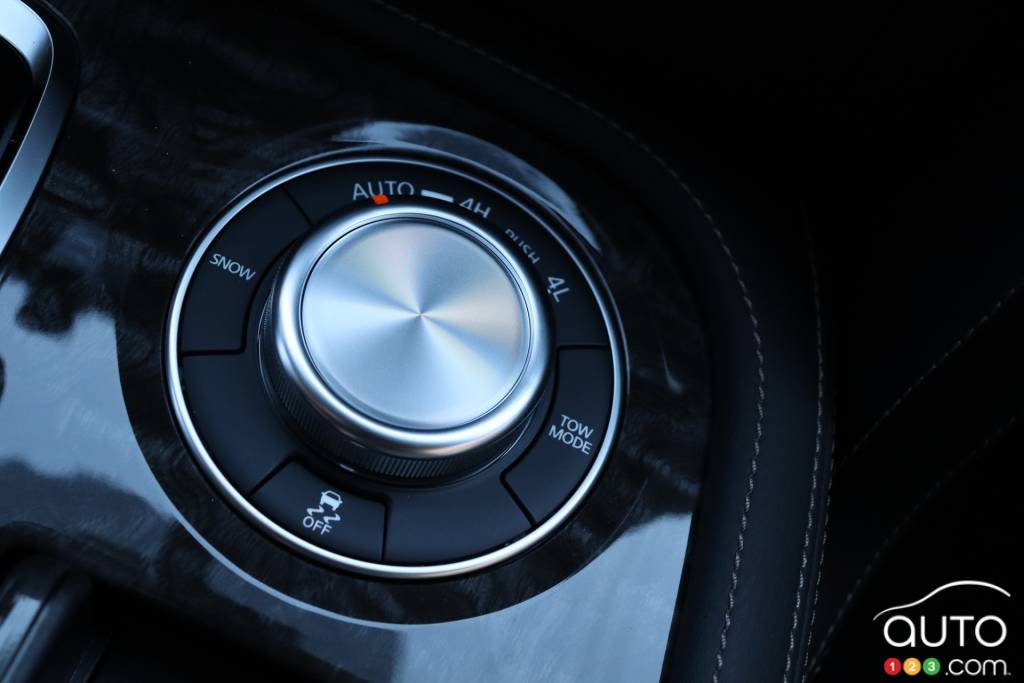