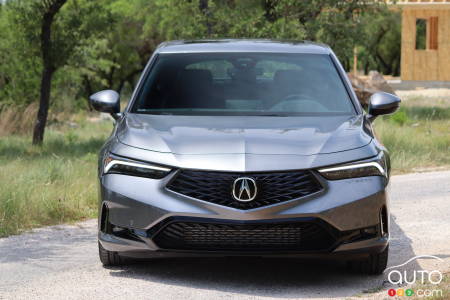 Austin, TX – It isn’t every day that a manufacturer releases a new car – a real, actual sedan - with a manual transmission option and traditional internal-combustion power. Rarer still is when the nameplate attached to it marks a return to the ranks of a known quantity.

But Acura ticks off both those boxes with this: the 2023 Acura Integra hatchback (or “liftback”) arrives for 2023 much as it did for 1986, when both it and the Acura brand got their starts in North America.

Not only did that event help debut the brand along with the Legend sedan – back in the days before SUVs and CUVs, when cars were the main event and not afterthoughts – but Acura has since sold over a million Integras in North America, and it has attained mild cult classic status as a result. Everybody has an Integra story, says Acura, whether it be the car you learned to drive a manual transmission on (as is the case for Emile Korkor, VP of Acura National Sales), or your memory of seeing it on the big screen in Ja Rule’s hands in The Fast and The Furious.

That was then, of course. Now, after a 17-year hiatus (or 22 years, if you don’t consider the 2001-06 RSX to be an Integra, though it was so named in some markets), the Integra has returned to replace the ILX, which was roughly the same size but is missing a crucial feature of the new car: a hatchback. 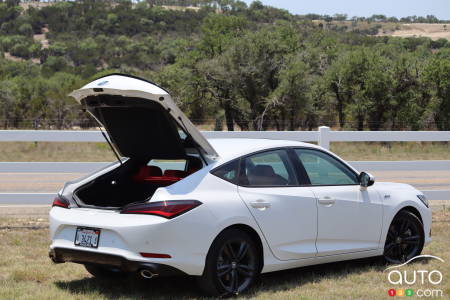 A hatch allows for a large opening to the storage area and the 688 litres of storage found behind the 60/40 split folding rear seats, though it is rather deep so there’s a bit of a reach around the large rear bumper. It also cuts a nice profile, although I would like to see what the optional 19-inch wheels would look like because the 18s seen here – they come as part of the top-spec A-Spec trim, which is the only trim they brought along for us to test at this event in Austin, Texas – are dwarfed by the large panels surrounding them. I also feel that the roofline is a little tall, making it seem like the Integra isn’t quite as hunkered down as a baby sports hatch should be.

Other notable stylistic additions include the “Frameless Diamond Pentagon” grille, which is a new look for Acura. It still gets the blacked-out spindly look of the older grille, but it now fits more seamlessly with the rest of the front fascia. The “chicane” LED DRLs, meanwhile, add a nice touch of attitude to the overall look while the embossed “Integra” scripting on the front and rear bumpers is a nice callback to the gen 3 car.

The A-Spec package also adds a functional rear decklid spoiler finished in gloss black, gloss-black lower grille and diffuser as well as an Apex Blue colour option and different tires. Non-A-Spec cars (pricing  is: Integra, $34,350; A-Spec, $37,050; Elite A-Spec, $42,550) get chrome around the side windows. One thing the A-Spec doesn’t get – that none of the trims get – is the graphics package seen on the concept. Which, most will agree, is no bad thing as those graphics looked…odd. 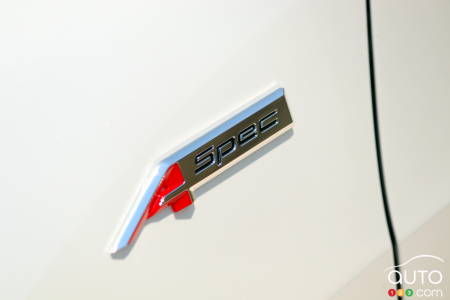 There is more to the A-Spec story, however. More than a styling exercise, some real performance bits are added if you opt for the A-Spec Elite package. Those include adaptive dampers, a limited slip differential and the ability to opt for a 6-speed manual transmission. Standard cars get a CVT with seven artificial ratios and paddle shifters so it feels like you’re swapping cogs.

It’s too bad the only way you can get an stick shift is with the top trim, but Acura maintains that buyers willing to opt for the MT are also likely to spend money on getting all the other features the top-spec trim adds, such as heated rear seats, WiFi hotspot, 16-speaker ELS audio developed in partnership with Dolby, wireless charging and CarPlay/Android Auto apps and leatherette/suede seats.

The manual transmission, it seems, has become a luxury feature. Who knew? 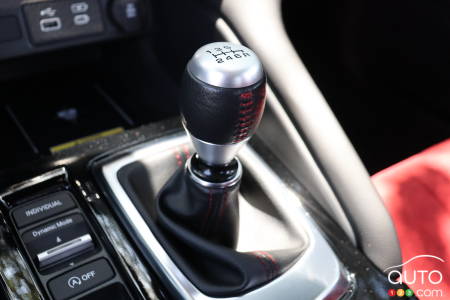 Acura Shows off Styling of its 2023 Integra, in Prototype...

Acura showed off the exterior design of its reborn Integra model tonight ahead of a fuller unveiling at the Los Angeles Auto Show next week. We’ll know more ...

Acura shared an image and short video to confirm what many already figured, which is that the future Integra will be available with a manual transmission. Th...