If you’re currently looking to replace your ride with a new family mover or a well-built and well-equipped luxury car, Honda and its Acura luxury division have some good news for you.

2018 Honda Odyssey
The fully redesigned 5th-generation 2018 Honda Odyssey minivan will be in dealerships as of this coming Thursday, and available starting at $34,890. Though the price point is slightly higher than its predecessor’s, the new model offers substantial upgrades in terms of comfort and amenities, for example with the addition of standard Honda Sensing technologies, a new audio system display with Apple CarPlay and Android Auto compatibility and new Magic Slide second-row seating.

As for its mechanics, the 2018 Honda Odyssey is propelled by a new 3.5L V6 direct-injection engine that provides 280 hp (32 more than the previous model) and is wedded to either a 9- or 10-speed automatic transmission, with manual gear shifters on the steering wheel. Here is pricing:

We’ll have a review of the new Odyssey for you in the coming days – stay tuned!

2018 Acura TLX
Unveiled in New York this past April, the 2018 Acura TLX high-performance luxury sedan is available in Canada since June 1st, and flashing a sportier and more eye-catching look that reflects the brand’s new focus on Precision-Crafted Performance.

The suite of Acura Watch driver-assist technologies are now included standard in all versions. In addition, the dual-screen interface has been revisited to make the menus and command structures more intuitive, while the new 7-inch capacitive touchscreen is 30% quicker to respond (as well as being compatible with Android Auto and Apple CarPlay). 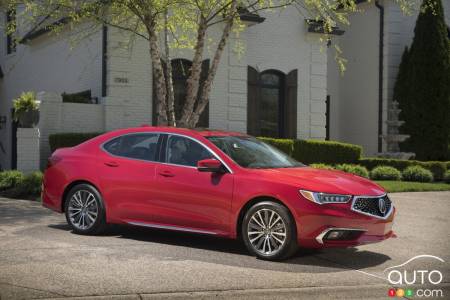 Acura MDX: new assembly plant
The strong sales performance of the Acura MDX has led the manufacturer to expand production, at least temporarily, to a second American plant. The company’s factory in East Liberty, Ohio, currently produces the Acura RDX as well as the Honda CR-V; its total production capacity is 240,000 units per year.

The move has necessitated a $85 million investment by the automaker. As of this coming fall, the company intends to make East Liberty the sole production facility for the MDX, while the current assembly plant for the model in Lincoln, Alabama will cease production to focus on the Honda Pilot.

Make sure to check out our reviews of the 2017 Acura MDX and its Sport Hybrid version! 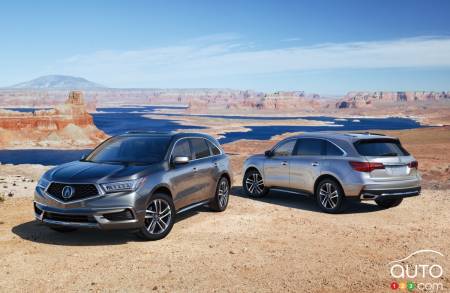 Honda Canada has issued a recall affecting 11,252 Odyssey minivans due to potentially faulty sliding doors. The locking mechanism on the doors could remain j...

Honda Canada recalls just over 7,400 2018 and 2019 Honda and Acura vehicles over a problem affecting the braking system. FCA and GM had issued recalls of the...