Auto123.com will be crowning winners of the 2019 Auto123.com Awards for best vehicles of the year on November 21 in Toronto. We’ve already unveiled the three finalists in each of the 19 categories; today we look in more detail at the Midsize SUV of the Year finalists.

Subaru makes a return this year to the midsize SUV segment with the Ascent. You’ll recall that the automaker had the Tribeca in its arsenal some years back; the model never quite found a sizable following.

A better fate almost certainly awaits the new Ascent. True to the brand, its contours won’t elicit too much love at first sights, but the interior is a whole other matter; it has a lot of very seductive assets. Subaru focused on creating a family-friendly environment, and succeeded marvellously well at this. Like all the finalists in this category, it can be had in a three-row, 7-occupant configuration.

Under the hood, a new 2.4L 4-cylinder turbo engine makes its debut here, and its output of 260 hp delivers reasonable power and performance to the Ascent. And of course, the SUV benefits form the manufacturer’s exceptional all-wheel-drive system. 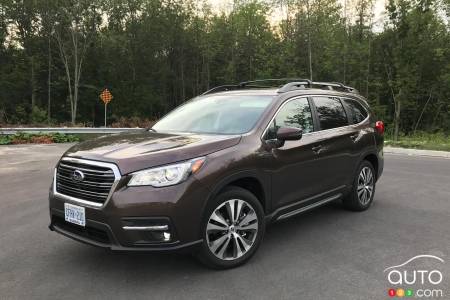 The Pilot is already into its fourth year on the market since getting its big revision in 2015 (for the 2016 model-year). Honda has given its midsize SUV a mild esthetic makeover to keep it fresh versus the competition.

In addition to the visual changes, Honda says it has modified the 9-speed transmission to maximize its effectiveness. In terms of safety, the Honda Sensing package is now included as standard equipment.

The company is also promising a plug-in hybrid version of the Pilot, which could make its debut over the course of the next year.

We can’t overlook the 3.5L V6 that powers it, which is a reference in the category. At the wheel, the keyword is comfort, and when it comes to stuffing things in the back, the maximum cargo space of 3,000 litres places the Pilot in a class apart. 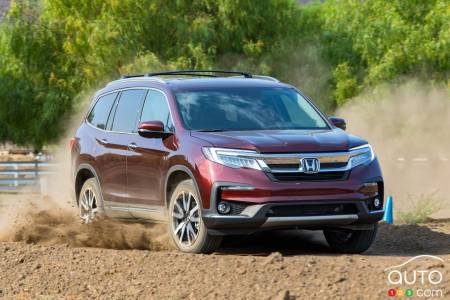 The CX-9 was largely reinvented in 2017; given how outdated its predecessor was, the new CX-9 constituted a genuine breath of fresh air. Simply, everything was upgraded, from the design to the interior presentation to the powertrain.

At the wheel, the CX-9 delivers perhaps the most engaging driving experience in the category. On the other hand, it’s not the most practical of the bunch, perhaps a result of the designers favouring exterior styling to the detriment of the interior space. Total cargo space, meanwhile, is barely more than 2,000 litres.

Inside the passenger space, quality is  clear throughout, and the comfort level is excellent. However, the CX-9 is still making do with the same multimedia system which looks more bargain-basement every year.

How to choose between the 2019 Honda Pilot and the 2019 Subaru Ascent? Auto123.com compares a big SUV and a souped-up wagon.