Volkswagen is sending the entire North American production allotment of the 2020 Volkswagen e-Golf to Canada, according to CarsDirect website, which unearthed documents outlining that the U.S. will not get the new edition.

The context of the decision is that Volkswagen is focusing strongly on its ID line of all-electric vehicles. The ID.3, essentially an all-electric adaptation of the popular Golf, is set to debut in Europe, and the company today confirmed that the ID. Crozz, destined for global markets including North America, will officially be called the ID.4.

American consumers who want an e-Golf this year do have an option: a spokesperson for Volkswagen explained that “You can still buy a MY19”. 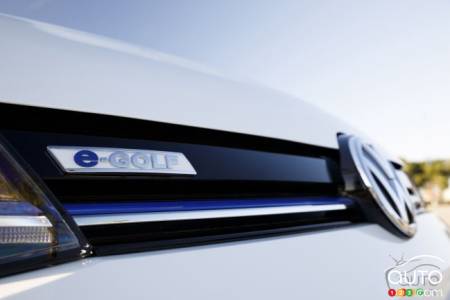 CarsDirect also hints at another reason why Volkswagen decided to send the full production run of the 2020 e-Golf north of the border: the American EPA tested the new edition of the small car and measured fuel-economy performance slightly inferior to the 2019 edition.

This likely would not have helped the e-Golf’s cause on the American green-car market, where the model suffers for having a shorter range (just 200 km or so) than rivals like the Chevrolet Bolt and Nissan LEAF. VW actually sold more e-Golfs in the U.S. last year than ever before, but that still only amounted to 4,863 units.

The new ID.4, meanwhile, is progressing apace and could even debut publicly at the New York auto show in April, if that event doesn’t get waylaid by the coronavirus crisis like the Geneva show did. The range expected from that model is double that of the current e-Golf.

You can deduce from all that that Volkswagen seems to have concluded it will have more success selling its stock of “outdated” 2020 e-Golfs in Canada, especially in the EV-friendly provinces of British Columbia and Quebec, than on the American market, still generally less open to small EVs. Be that as it may, fans of the Golf and of EVs in Canada should be happy since there will be more choice available at dealers in the coming months than in previous years.