Since the start of 2020, we’ve provided you on more than one occasion new details and even spy shots of the next-generation Kia Sorento launching this year. What’s more, an unconfirmed report had the Sorento making its big debut in South Korea on February 17th.

This week, however, the Korean automaker confirmed that the big reveal will actually take place at the Geneva auto show on March 3rd. At the same time we learned a little more about the new Sorento.

The model that we got an early peek at is the version destined for Asian markets, but the 2021 Sorento that appears at North American Kia dealerships won’t be very different. The new edition features updated lines and contours, LED headlights and a jagged front grille. In back, the taillights with twin vertical bars deliver a distinctive touch. 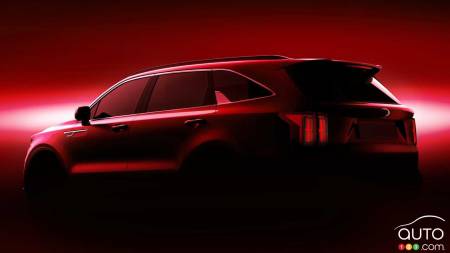 For the rest, we already knew a hybrid model was in the works, but now Kia has confirmed it. It will most likely be a conventional hybrid variant rather than one you can plug in, at least initially. The standard engines offered with the model will include a 4- and a 6-cylinder gas engine.

The 2021 Kia Sorento should be available for purchase by the end of this year as a 2021 model. The coming months should tell us more about the trims and pricing specific to the Canadian market.

Speculation is, meanwhile, that the North American edition of the new Sorento could make its debut at the New York Auto Show in April, or failing that at the Detroit show in June.

Kia has revealed official images of the 2021 Kia Sorento, including of the interior, ahead of the big premiere of the SUV at the Geneva auto show. In general...