Hyundai today unveiled its next-generation 2022 Tucson SUV. At this point, the details revealed have to do with the U.S. version of the redesigned model, but we don’t expect there to be any major differences in the nextTucson coming to Canada.

Like the U.S. market, for example, we will likely only get the long-wheelbase version of the Tucson sold in global markets.

The next Tucson will be longer than before, with a new 108.3-inch wheelbase that's 3.4 inches more than for the outgoing version. The SUV is also about half an inch wider and half an inch higher. Without the optional panoramic sunroof, Hyundai says that occupant space increases by 170 litres to 3,058 litres. Cargo volume now reaches 2,265 litres with the rear seats folded down. That's a notable 227 litres more than the 2021 model.

These gains will allow the Tucson to match up better versus the segment's top performers, namely the Toyota RAV4, Honda CR-V and Nissan Rogue. 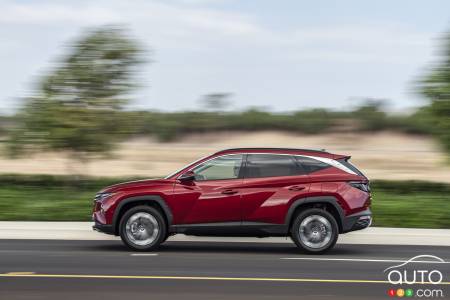 In terms of styling, the Tucson boasts curved fenders, prominent wheel arches and short overhangs. The appearance is more muscular than before, with the front end in particular promising to be a conversation starter. Things are less radical in the rear, where designers have integrated the Hyundai logo into the window and hidden the wiper under the spoiler.

Inside, the driver’s space features a push-button gear selector and a four-spoke steering wheel, already seen adopted in other recently updated new Hyundai models. On the other hand, the Tucson incorporates a distinctive new dashboard with a horizontal line extending door-to-door, and from what we can tell the visual effect is quite impressive. A 10.3-inch screen for the multimedia system, as well as a floating screen in place of the instrument cluster, are also standout elements. Overall the approach is undeniably modern, but will require some time for Tucson habitués to adapt to. Silver trim, a wireless charging system for smartphones, as well as ambient lighting with 64 colours and 10 brightness levels are other notable features on the 2022 Tucson version presented today. Navigation with split-screen functionality and an 8-speaker Bose audio system will also be available. The standard 8.8-inch touchscreen will offer wireless connectivity to Apple CarPlay and Android Auto applications and incorporate a new voice recognition system with expanded capabilities that will include control of the tailgate, heated steering wheel and heated and ventilated seats.

FWD is standard with all-wheel drive available (and of course standard on several versions, as you might guess). Gasoline-powered models will be equipped with the same engine as the Sonata, a 2.5L, 4-cylinder that develops 187 hp and 178 lb-ft of torque. 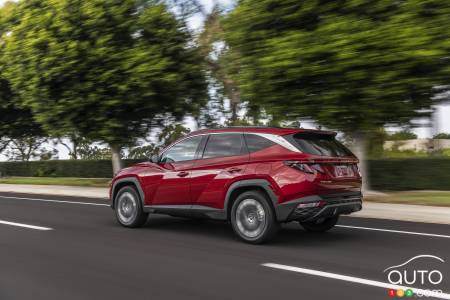 The new hybrid and plug-in hybrid models will be equipped with a 1.6L 4-cylinder engine, 6-speed automatic transmission and standard all-wheel drive. With the hybrid variant, which has a 59-hp electric motor and a 1.49-kWh battery pack, total output of the system is estimated at 226 hp and 258 lb-ft of torque. According to Hyundai, the hybrid powertrain is 30 percent more fuel-efficient than the standard gasoline engine and offers a range of more than 800 km.

When the plug-in hybrid version goes on sale next summer, it will be equipped with a 13.8 kWh battery pack for an estimated all-electric range of approximately 45 km. With its 7.2 kW charging capacity, Hyundai says it will take less than two hours to refuel using a Level 2 terminal.

However, the size of the battery will handicap Tucson when it comes to Canadian government rebates. Remember that to qualify for the maximum subsidies offered by the federal government, the battery size must be at least 15 kWh. An N Line version of the Tucson is also in development, and it’s set to launch towards the end of next year. Hyundai says it will have even more aggressive-looking exterior and interior.

Beyond that, we’ll have wait to see what the model trims range is, particularly as it applies to the Canadian market. One thing's for sure, however: by offering more volume for occupants and cargo, the new Tucson should expand its market share and have a decent chance of making a name for itself in its segment.

The regular and hybrid versions are expected next spring, while the plug-in hybrid varient should arrive in the summer of 2021. 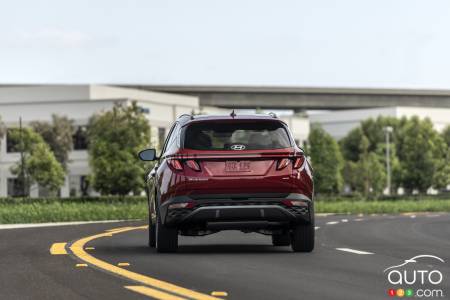 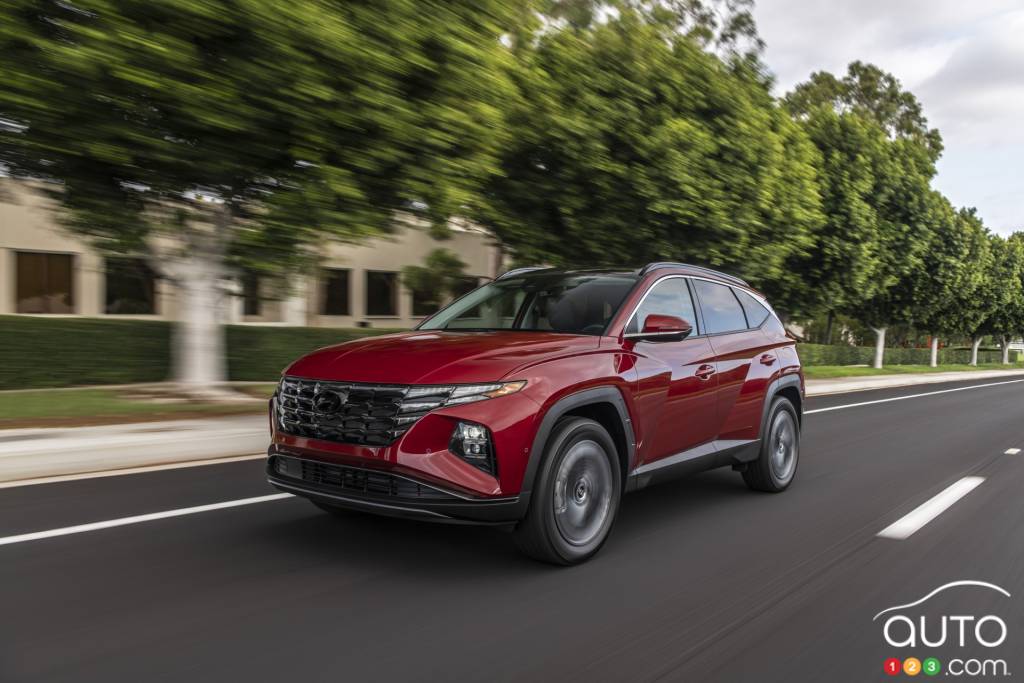 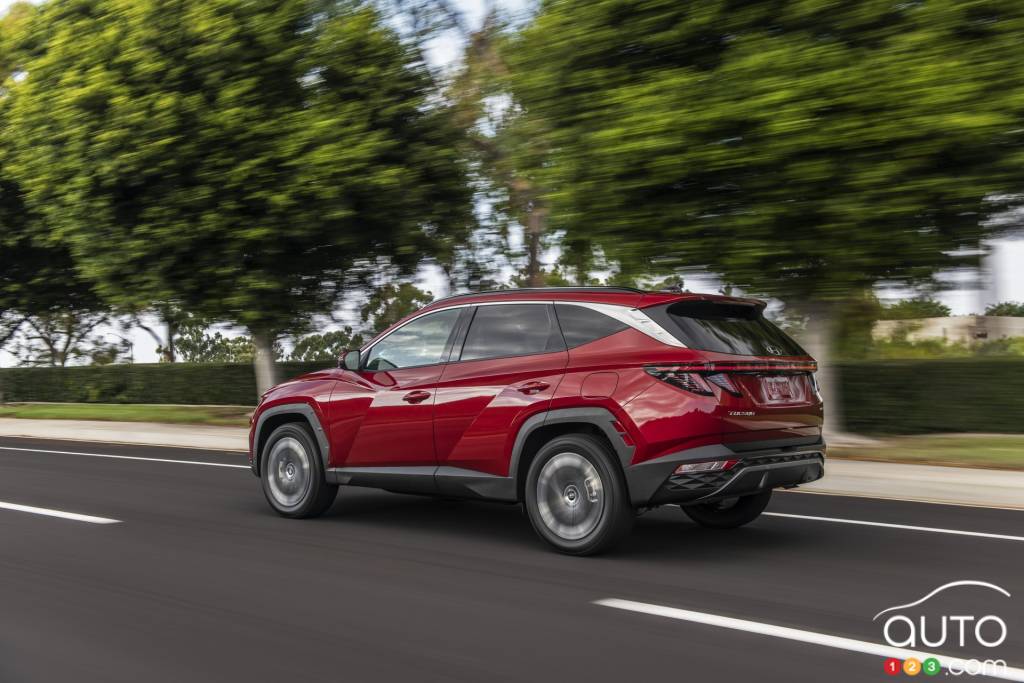 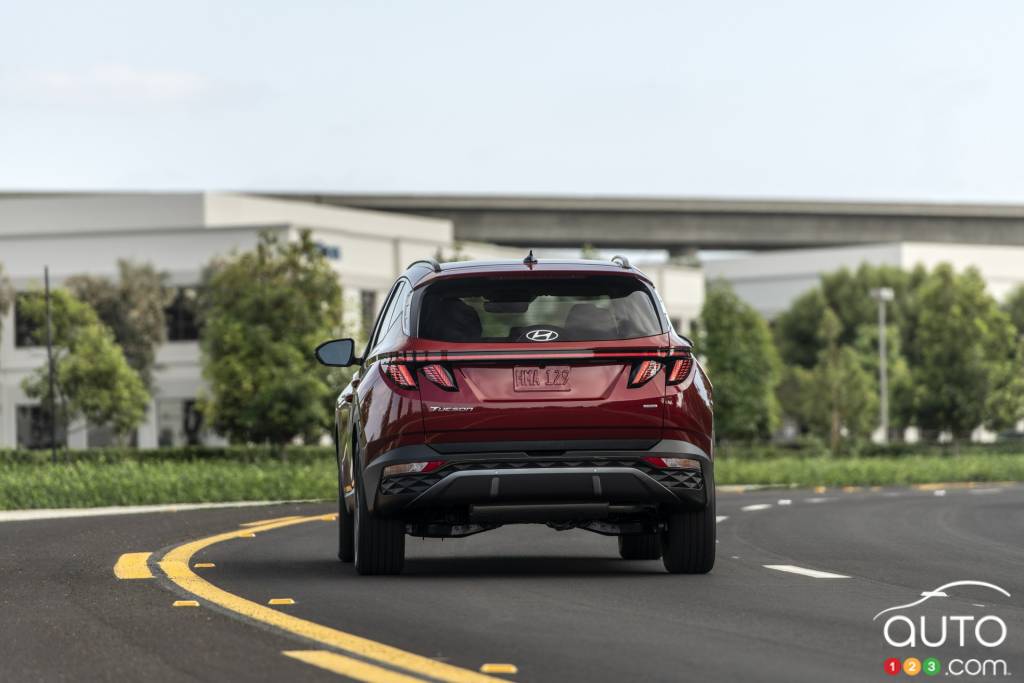 The 2022 Hyundai Tucson Hybrid compact SUV preaches dynamism even before efficiency. Here's our first drive review of the model that will soon be joined in t...

The European version of the 2022 Hyundai Tucson N Line 2022 has just been presented for consumers on the Old Continent. It gives North Americans a chance to ...

Hyundai has given a virtual presentation of its overhauled 2022 Tucson SUV. The fourth-generation Tucson is a model of innovation on several levels, particul...