When times comes to do a post-mortem on the 2018 automotive year, front and centre will be an analysis of what has happened and will happen to the traditional car such as we’ve known. The most significant moment up to now had clearly been Ford’s decision to dump nearly all of its cars from its North American portfolio, except for its iconic Mustang. But quantity of other manufacturers have been taking long, hard looks at their own sedan/coupe models.

You can now officially add Lexus to that list. Like its rivals, the Japanese automaker understands that consumers have in great numbers fallen in love with the SUV, and it is gradually reorienting its efforts and lineup to respond to popular demand. But compare what Toyota’s luxury division offers with what the likes of BMW and Audi have in their portfolio, and you see that the Lexus name is found on precious few utility models.

Still, we did see the RX-L, stretched variant of the RX, appear this year, and next year the UX will join the Lexus lineup.

On the car side, the LS large sedan got a refresh last year, and the revamped ES has just made its official debut. That leaves two aging models on the roster, with big question marks attached to them: the IS and the GS.

For Lexus, the question about to do with the two cars is all wrapped up in timing – and for these cars, the timing is all wrong. Right when the two models are due (or overdue, even) for a major refresh, the company is under pressure to commit funds where they will bring the most return in terms of profitability. And that, is in the SUV segments.

The Lexus IS model debuted in 2014, and the latest version of the GS was first introduced in 2011.

The obvious question then is whether the two models have a future within the brand. Rumours have circulated of a four-wheel-drive version of the ES, which would expand its potential customer base. David Christ, Group Vice President and General Manager for Lexus, told Automotive News that "We can't do it all at once, but we're certainly evaluating both vehicles.” 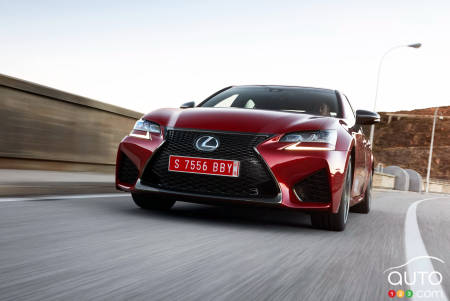 If we had to wager on which of the models is most likely to get the ax, we’d place our bet on the GS. In Canada in 2017, it sold only one-tenth what category leader, the Mercedes-Benz E-Class, sold in the same period. Even within the Lexus lineup, the ES outsold it by a factor of six.

The ES, in fact, was the third-best-selling car in its category last year, behind the E-Class and the BMW 5 Series.

In the U.S, the ES outpaced its German rivals. Even the GS did better there than it did in Canada, though it still lagged within its category.

For sure, the stars are not aligning well in its case.

As for the IS, it’s hard to image Lexus will throw it overboard; it is just arriving at maturity and represents a nice entry-level model for the luxury brand.

We review the 2019 Lexus IS 350, a plenty capable, well put-together and pretty good-looking little luxury sedan, especially in its F-Sport garb. This car ce...