The 8th generation of the Volkswagen Golf, set to debut in Europe next year, will come with a 48-volt mild-hybrid system. The company made the announcement this week in a statement that also outlined its plan to offer an electric-powered variant of nearly all of its models in the near-future.

The Golf will be the first to benefit from some form of electrification; in its case, VW will add a starter-generator powered by a belt, which in turn is fed by a 48-volt electrical system. The technology is already in use in some Audi models, including the A7. An energy-recovery system will also harness energy generated by braking and send it to a compact lithium-ion battery pack.

This new hardware will allow the Golf to drive at stable speed with the gasoline engine turned off. The car will also use electrical support when starting from a stop, for example at a traffic light. VW testing showed that the technology virtually eliminated response lag of the turbo engine at low speed. Another benefit will of course be a reduction in overall fuel consumption. 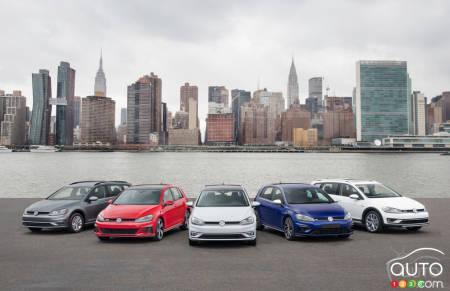 When the new Golf hits the market, it is not likely that each and every variant of the model will come equipped with this new mild hybrid system. Rather, we expect that the hybrid option will be made available as an add-on for an extra cost. As to whether the technology will make its way across the Atlantic, that remains shrouded in uncertainty, even though it’s certain it would be welcomed with open arms by many consumers.

An interesting fact: on the models tested, the addition of a multimedia screen allowed drivers to see how energy use was being divvied up between the combustion engine and the starter-generator. They could also know the exact number of kilometres driven without consuming a drop of gasoline. Seems like that would be an effective motivator…

From past experience, we can realistically expect a year’s delay between the introduction in Europe of the new Golf and its appearance in North America.

Which means we’ll know in 2020 exactly what system or systems will power our new Golf over here.

After much waiting and teasing, Volkswagen today launched the new eighth-generation 2020 Volkswagen Golf. Esthetically the model hews closely to its predeces...