BMW is in full swing with its electrification strategy trhat calls for the introduction of 25 electric-powered models by the end of 2023. One of those could well be an all-electric sedan, to be called the i6. BMW is aligning this model to compete directly with Tesla’s Model S and future EVs like the Audi e-tron and Mercedes-Benz EQS.

Don’t go lining up at your local BMW dealership for the i6 just year. The model is slated to debut only in 2024. But there’s already talk it will be equipped with a 120 kWh battery and benefit from an output of 670 hp from its dual-motor powertrain.

That powertrain is already in testing. Its design is modular, which means the automaker can adapt it to many different vehicles. This helps explain why most of the new electric-powered products on the way from BMW will be derived from already-existing models, like the iX3 that is expected later this year and the i4 scheduled for 2021; these two are essentially battery-powered variants of the X3 and 4 Series coupe, respectively.

Even the future iNext SUV is at its core a green version of the X5 – and it may well get the name iX5. 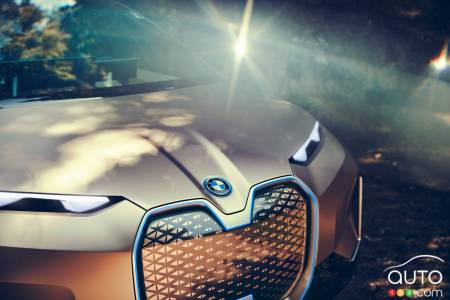 As for the i6, it will be a fully unique model, developed as a replacement for the old 6 Series. It could inherit the exterior shape of the iI Vision concept shown in 2017.

We also know that BMW is working on the i1 and i7 electric models. Recall that the company has already trademarked all designations from i1 to 19, and from iX1 to iX9.

As we enter 2020, a very eventful decade awaits in the automotive industry, in case anyone still had any doubts. Buckle up…

Mini Will Be First BMW Group Brand to Offer Only Electric...

BMW announced this week that Mini will be the first of its brands to forsake the combustion engine. All of its vehicles will feature electric power starting ...

BMW has shown for the first time the production version of its i4 electric sedan. The model is to be unveiled in full in the coming weeks, and it will offere...