We recently reported on Ford’s issues with fire risks in its European Kuga plug-in hybrid SUV model. Now BMW has announced it will also be recalling a number of 2020-2021 plug-in models, in its case due to short-circuit problems.

And of course, short circuits can mean a fire, potentially.

All of the affected vehicles are plug-in-hybrid models, which use larger batteries to provide all-electric power over a distance of a few dozen km. A total of 26,900 BMW vehicles are being recalled, including 4,509 in the United States. We contacted BMW Canada to find out how many units were targeted here. In all 273 models in Canada are affected.

The problem is said to be related to the Samsung battery used in the affected models. According to the recall documents, debris may have entered the battery cells during production, which may cause a short circuit. BMW says that in “rare cases”, a fire could result.

BMW first became aware of the problem in August when it was notified of a fire involving an X5 SUV. Between then and mid-September, the company discovered three more such incidents. After further investigation, the manufacturer discovered the original cause of the problem.

While that’s a critical first step, the next part obviously involves a fix. And that, BMW does not yet have in place, and it leaves owners of the at-risk vehicles in a bind. BMW is asking them to refrain from charging their PHEV’s battery system, and to avoid using the Sport or Manual modes or the paddle shifters on the steering wheel. A spokesperson for the German automaker explained that these suggestions are due to how and when the battery charges.

The vehicles affected are: 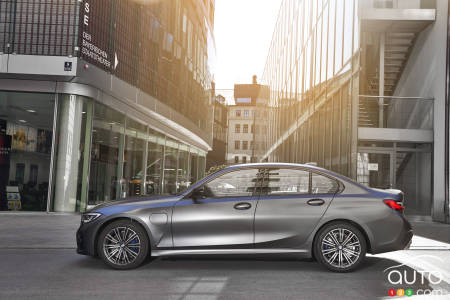 The recall campaign is already underway in the United States, and BMW is sending registered mail notifications to U.S. vehicle owners informing them of the recall. Dealers should already have received their notification, according to recall documents from the NHTSA (National Highway Traffic Safety Administration), and owners should expect to receive theirs by the end of November.

As mentioned, we will get back to you as soon as possible with information on what, if any, steps to take in Canada.