While the shift to electric power is real and well underway for most auto manufacturers across the industry, the next big step in this domain is the development of solid-state batteries. We know that Toyota, for example, is working on the technology; now BMW has announced that a concept with such a system is coming for 2025, and is projecting a first production model to be ready by 2030.

This type of battery will power the next generation of electric models at BMW, which will be fundamentally distinct from the EVs we know now. Currently, the Bavarian company's electric models are based on existing combustion-engine models, but the vehicles to come, to be grouped under the “Neue Klasse” banner, will be assembled on a platform dedicated to electrified products.

Solid state batteries, as their name suggests, are characterized by their solid electrolyte, as opposed to the liquid electrolyte used in the lithium-ion batteries that equip current electric vehicles. BMW believes this new approach will significantly increase energy density.

And higher energy density means that more energy can be stored in a given volume of space. This will allow for increased range without the need for a more-massive battery. It will also make it possible to design more-compact units. 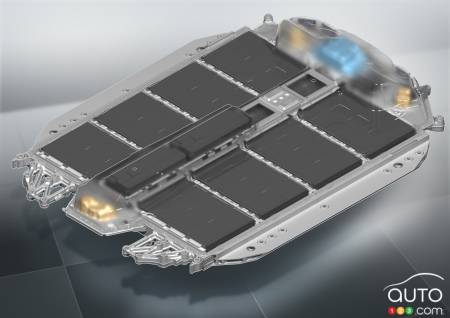 Photo: BMW
Battery of the BMW i4

A company executive also said that BMW will offer the greenest electric car in the world. Frank Weber, a member of the BMW Group's development board, said it will be “sustainable from the initial idea to recycling after its use phase”.

While no company has yet made solid-state batteries on a commercial scale, as mentioned, several manufacturers are working on the technology. Toyota is one, as is Volkswagen, which has invested in the fledgling firm QuantumScape and affirms that the company's battery technology will increase the range of its vehicles by 30 percent and reduce their recharge time to 12 minutes.

BMW said its new vehicles will be more connected and focus on aerodynamics to maximize range. The firm will also emphasize sustainability in the manufacturing process, including the use of recycled materials and renewable energy.

The Neue Klasse models will be preceded in the EV pipeline by the iX SUV and i4 sedan, both scheduled to launch in 2022. Electric versions of the 3 Series, 7 Series and X1 are expected to follow, filling the gap before the next generation of EVs arrives.