Muscle cars are associated above any other period with the 1960s, but it never really went away, and in fact in the last 10 to 15 years, we've seen a second wave of them, thanks mainly to Dodge.

The number of models occupying the genre has decreased over time, in part because of fuel prices but also because many buyers have moved on. Buying this type of less-practical and less politically correct vehicle is just not the thing to do. The drop in sales figures is there to prove it. Automakers have naturally turned their focus to more lucrative categories, namely those in the SUV and pickup sectors.

Still, the power available from the few models still around is more mind-blowing than ever, the passion level among enthusiasts is undiminished. These folks also live with the understanding that, with the end of combustion engines in sight, we are experiencing the last gasp of the traditional muscle car.

As of 2035, the sale of new gasoline-powered vehicles will be prohibited in several North American territories, including California and Quebec. Others will follow suit.

So Dodge knows exactly the challenges that lie ahead. That said, that’s not to say it doesn’t have options if it intends to stay in the niche.

“Everybody knows electrification is coming, we’ll reinvent the muscle car as far as Dodge is concerned. I’m extremely excited about where the future is going, but right now everybody is enjoying 'the bachelor party.' This is the last hurrah.”

All eyes are specifically on the Challenger and Charger models, and what Dodge intends to with them. The two cars are closely associated and identified with big V8 engines, but inevitably that's going to change. What seems obvious is that there will almost surely be some form of electrification introduced before either model goes all-electric.

What happens after that? Who knows. But Matt McAlear expressed optimism about the future of the muscle car, saying “The replacement models will be so much more exciting”.

For fans of the genre, it’s reassuring to hear that of course. But we'll just have to be patient, because it’s also clear that as long as it can, Dodge will continue bolting V8 engines under the hoods of its cars. 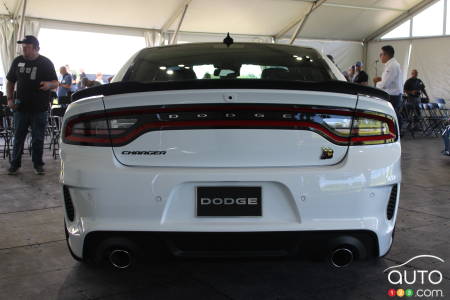