All-electric Ford-150 and Transit models will be ready by 2022, says automaker.

We’ve known for quite some time that Ford intends to produce an all-electric version of its cash-cow F-150 truck, and that a Transit van bereft of a combustion engine is also on the way. Today the automaker gave us a timeline for the arrival of the two products: within the next two years.

Ford’s Jim Farley gave new details regarding the company’s schedule for developing purely electric versions of the F-150 and the Transit. Appearing on CNBC’s Squawk program, he said that the two models would be ready to go “in the next 24 months” – which of course takes us, in the slowest scenario, to the middle of 2022. Ford had previously indicated that the Transit EV would launch for the 2022 model-year, but it had been much more circumspect regarding the electric pickup.

The timeline puts Ford slightly behind schedule compared to General Motors, which plans to launch its Hummer electric SUV/truck under the GMC banner late in 2021. Obviously, that won’t be a traditional pickup in the mould of the F-150, or of the other electric light-duty trucks on the way.

Those other pickups include the one from Rivian; that automaker plans to launch its R1T truck before this year is out. Fledgling company Nikola has announced it will start taking pre-orders on its own EV, called the Badger, later this month; deliveries are set to begin in 2021.

Tesla and Nikola have both seen their stocks skyrocket in recent weeks, as investors get seduced by the potential of their trucks powered solely by electricity. Jim Farley and the Ford brass can read numbers like anyone else, and so that may have incited the company to be more forthcoming about its plans.

And so the race is on to see who comes out with their products first in this budding segment. In the long run, however, it’s their relative quality that will decide how each performs. 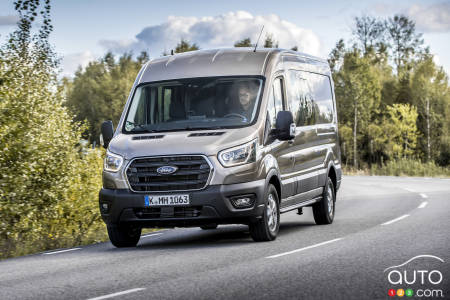 Ford shared an image previewing what the front grille of the electric F-150 will look like. The image is intentionally dark and offers little detail, but it'...