We've reported previously about problems with the different roofs of the new Ford Bronco, problems that forced the company to delay model deliveries. Well, good news came this week as Ford confirmed it will begin shipping some replacement hardtop roofs to dealers this week, as well as some complete vehicles.

As reported by the Detroit Free Press, the pace of deliveries is expected to pick up in the coming weeks. Said Mark Grueber, Ford's marketing manager, “We’ll be continuing to ramp that up to replace the roofs on vehicles currently being held needing the new roof.”

That's the solution Ford promised back in August when dealers were told the company was working to get new hardtops for those whose vehicles had been delivered with a defective roof, or for others who were still waiting for their Bronco to arrive due to supply-related production delays.

Units that had already been built but not yet delivered due to a lack of parts have been piling up in the manufacturer's inventory lots. As well, models-to-be slated for production, but for which it was known that certain components were missing, have seen the date of their manufacture postponed, while Ford waits for the missing parts.

This explains the delays. With part of the problem solved, things are expected to return to normal. However, the Detroit Free Press is urging customers to remain patient, as Ford reportedly still does not have enough parts in stock to cover all orders received for its model. Broncos that are set to get a new roof will also have to undergo final testing to see if the unit fits properly and to determine if there are any leaks.

In short, Ford’s on the right track with its Bronco, but the back-to-normal is still some ways off. 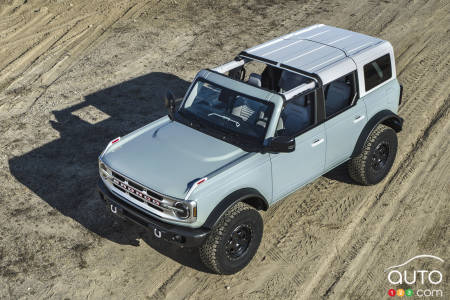 Photo: Ford
Ford Bronco, from above

Ford Confirms Bronco Raptor is On the Way

Ford has confirmed what most people were anticipating, namely the arrival of a Raptor version of the new Bronco. The model promises to be extreme, as even th...

Articles By
Daniel Rufiange
Toyota Will Spend $ 1.2 Billion to Build an E...
Article
Porsche Presents a Seat Made in Part With a 3...
Article
Stellantis' Windsor, Ontario Plant Will Opera...
Article
More from this author