In between the announcements of a limited 50th anniversary revival of the classic Mustang Cobra Jet version and the launch of the upcoming 700-hp GT500, Ford has also been focusing on the greener side of the automotive terrain. How does an electric Mustang sound to you?

The automaker had actually confirmed a year ago that it would be producing a hybrid version of its iconic Mustang; now it is indicating that an electrified Mustang is on track to be ready by 2020. The American auto giant has promised to introduce 13 electric-powered models by 2021, an ambitious plan to be sure but one that shows it does not intend to be outpaced in the eco-vehicle segment.

Speaking with Detroit Bureau, Ford marketing manager Corey Holter confirmed the 2020 target date for the Mustang, adding that one of the reasons the model is a priority is that the company, like all automakers, is keeping a close eye on non-North American markets like Europe and especially China. Said Holter, “a hybrid Mustang will help further unlock Mustang's potential in some of those markets”.

Already, a new, more fuel-efficient version of the Mustang fitted with an EcoBoost turbo engine has contributed to growing sales in these regions; the model has been the best-selling sports coupe in the world for the past three years. Still, Ford is taking pains to reassure Mustang fans that any new electrified version will still provide “V8 power” and exceptional low-end torque. Other possibilities being explored by Ford are an all-wheel drive powertrain and even an all-electric Mustang.

“Mustang will continue to evolve and strike the right balance between heritage and being contemporary and fitting into today’s society.”

No other details have been announced or leaked, and the development process is still in an early enough phase that much could still change before we see a hybrid Mustang hit the market, any market. Remember also that Ford has already talked about developing, also for 2020, an all-electric SUV, calling it the Mach 1 - which was once the name of a Mustang option package. 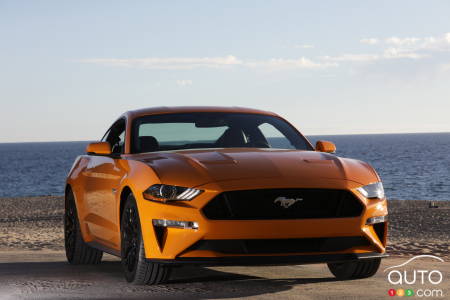 A first look at the Ford Mustang hybrid?

A new ad by Ford starring Breaking Bad actor Bryan Cranston may have just given us a first glimpse of the very first hybrid version of the classic Ford Mustang.