Car shows are, among other things, the opportunity to thousands of media organizations to speak directly with important figures from the various auto manufacturers. And this means pushing them for scoops about current and future projects.

Company representatives are game, as they can use the occasion to let loose the information they want out in circulation. At the Mazda stand at the ongoing Los Angeles show, while the new Mazda3 was garnering most of the attention, automotive magazine Autocar did get wind of another bit of juicy news. Mazda’s European head of design, Jo Stenuit, shared a few details regarding the first electric car that the company is working on and hopes to bring to market by 2020.

The first of those details involves the design. Mazda doesn’t want it to get a distinctive look simply by virtue of being an electric car. “We don't want an EV to look like a fridge,” explained Stenuit. This was reiterated by Mazda’s head of design, Ikuo Maeda, who added that he hopes the model’s designers and stylists comes up with a car that looks “digital”. 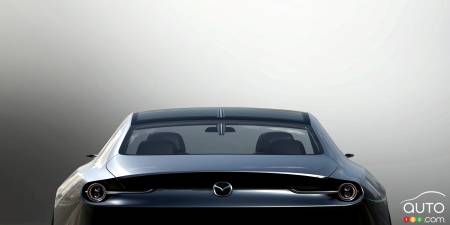 In other words, the first Mazda EV will look like… a Mazda.

As for the actual shape it’s going to get, the automaker is keeping that information a tightly guarded secret. At this point we’re not even sure if it will be a car, an SUV or some type of mix of the two. One thing we do know is that it will be produced in two versions, one of them all-electric. The other will be equipped with a rotary motor to help extend range. Mazda wants to eventually produce a plug-in hybrid vehicle as well, but we don’t know if that will be a version of the same model, or an entirely new one.