During the 11th edition of the annual Car Design Night Geneva at the 2018 Geneva International Motor Show – an event put on by Car Design News magazine – Mazda’s Vision Coupe prototype took the award for Concept Car of the Year. The recognition followed hot on the heels of its celebrated appearance in Paris last month.

The award was given to the spectacular concept car as a result of a vote taken by a panel of 18 acclaimed designers active in the automotive domain. Recognition from your peers is perhaps the ultimate honour…

Already, the prototype had turned heads when it debuted in Tokyo last October. While it sports the Vision Coupe name, the sleek model is actually a four-door, and is clearly a reflection of the current design trend towards blending sedans with coupe styling. Its contours represent an evolution of the Kodo design signature, which seeks to infuse car’s design with a soul, as if it were a living, moving creature.

Second and third place in the voting went to the Honda Urban EV and the Kia Proceed Concept respectively. Descriptions of the winning entrant by the folks at Car Design News ranged from “sophisticated” to “magnificent”.

Many, us included, will be watching closely to see how much the designs of the next-generation Mazda3 and Mazda6 will be influenced by this award-winning concept. 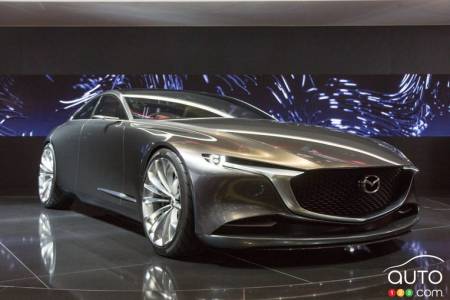