It’s no secret: the manual gearbox is an endangered species in the automotive industry. For many mass-market models to drop the option from their catalogue is unsurprising, but when even sport models stop offering manual transmissions, it’s hard not to sit up and take notice.

BMW is choosing this route with its new Z4 roadster. In an interview with Road & Track magazine, Klaus Fröhlich, head of R&D at BMW, said that "At the moment this segment is very small, and I had to fight hard to make it [the Z4] happen at all, honestly. It was against the finance controllers."

So it’s no manual transmission for the Z4. At the same time, it appears unlikely we’ll see an M performance version, for the same reason as mentioned above: the market is just too small. At BMW, the team behind the new generation of the Z4 is probably happy to see one produced at all.

One factor that may have made this new Z4 possible is the joint development project entered into by BMW and Toyota (for its new Supra). The Japanese automaker wanted to get hold of a sports car platform, while BMW sought to upgrade its expertise in hybrid and electric technologies.

The new Z4 will be powered by a 380-hp 6-cylinder deliver, according to its manufacturer, exceptional driving dynamics. 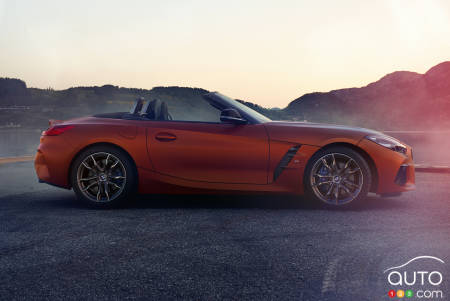 At last, real images of the new BMW Z4

Official images of the new BMW Z4 have just leaked out ahead of the actual launch of the model next week at the Pebble Beach Concours d’Elegance. The images ...