We learned last week that the Toyota Yaris Hatchback was disappearing from the American market as of this year, after U.S. sales of the model collapsed in 2018.

It wasn’t just any old collapse either; sales fell by 78% last year in comparison with 2017. The seriously aging model was no longer a competitive choice, in the view of consumers. Still, Toyota did not say the model was disappearing for good, and the company promised news shortly.

Shortly ended up being just a few days later.

A new report by Car and Driver reveals that Toyota has entered into an agreement with Mazda to that the next hatchback version of the Mazda2 will also be the next Yaris Hatchback.

This development is not a huge surprise. The Yaris sedan sold here is in fact a rebadged Mazda2; that car is assembled for Toyota in Mexico by Mazda.

Mazda did not confirm the news, but the company has promised a presentation of a new Yaris-related product at the next New York auto show coming up in April. 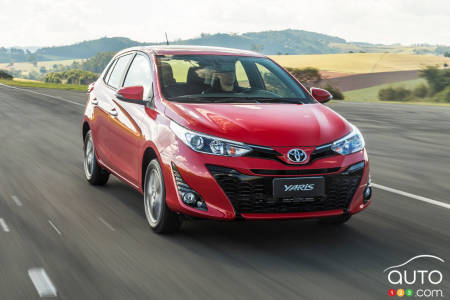 Odds are then that we will be seeing the 2020 Yaris Hatchback on display in New York this spring. It’s expected it will feature a design that approximates that of the Yaris sedan.

The current generation of the Mazda2/Yaris sedan has been with us here since 2016, and since late 2014 in other markets. Which means the new Yaris Hatchback from Toyota will be an older model.

The agreement with Mazda will allow the Yaris Hatchback to live on, but deeper changes will have to be made if the model is to survive in the long term.

Toyota Canada has announced full details for the new 2019 Toyota Yaris Hatchback, including pricing for each trim. The manual gearbox survives as an option f...