Ford is facing a rather enviable problem with its new Maverick pickup truck. The pickup's popularity having blown past expectations, the automaker is temporarily halting taking new orders, so it can focus on filling the large and growing backlog of orders it has already received.

Though the model only launched late last year, Ford managed to sell 13,258 units. And demand is not letting up. That's why the U.S. automaker informed dealers this week that it was temporarily sealing the order books so that current bookings could be met.

“There's been overwhelming demand for Maverick – both hybrid and EcoBoost. We're making the decision to stop taking new retail orders on the 2022 Ford Maverick starting after January 27 to focus on existing orders,” Ford spokesman Mike Levine told The Detroit News.

Ford will open the books again in the summer, at which point new customers will be reserving 2023 editions.

The model's popularity is easy to understand. First, its compact size appeals to those with more modest needs or who simply want a pickup truck that won’t bust their budget. Recall that in the U.S., the base model is priced at about $20,000; here in Canada it sells for as little as $26,000, more or less. 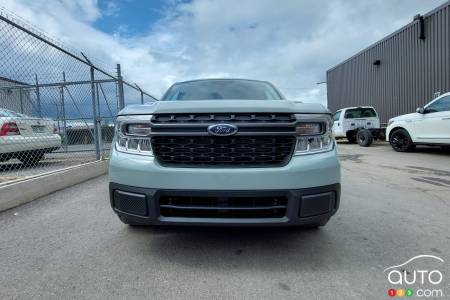 Quality is another selling point for the Maverick, which won the NACTOY North American Truck of the Year award earlier this month, beating out the Hyundai Santa Cruz and the Rivian R1T. And for having driven the model recently, we can confirm that it delivers a positive experience on the road. The Maverick is fun to drive.

Dean Stoneley, general manager of Ford's truck division, told the Wall Street Journal that the company doesn't want to take more orders than its production capacity allows. This isn't the first hiatus with the truck's debut. The company had announced earlier that it was stopping taking orders for the hybrid variants. This time, the entire lineup is targeted. Executives even asked employees who were driving versions to return them to dealers so they could offer them to their customers.

And let's not underestimate the role played by the microchip shortage that is putting a damper on all manufacturers with their production schedules.

If you're interested in a Maverick, we suggest you check with your dealer first, but be prepared to be patient.

All Ford Maverick Hybrids Have Been Snapped Up; There Won...

The Ford Maverick Hybrid is now all sold out for its first year of production, according to the Carbuzz website. Consumers who want one will have to wait for...

2022 Ford Maverick Hybrid: And the Oscar for the Best Ide...

Ford has finally introduced the hybrid version of its Maverick pickup truck, several weeks after the regular version debuted. See what we thought of this var...