IIHS pushes for universal use of anti-skid technology

Even when you have an outsize appreciation of your own judgement, it's nice to get some outside validation, so I welcome the most recent testimony of the ability of electronic stability control (ESC) to save lives.

The technoids and actuaries at the U.S. insurance industry's crash safety centre (the Insurance Institute for Highway Safety, or IIHS) have crunched another year of crashes and a larger set of vehicle models and found that "ESC reduces the risk of fatal multiple-vehicle crashes by 32 percent."

That ESC could save a lot of lives was plain to me when I drove the technology's first commercial iteration, in a series of Mercedes-Benz models with Electronic Stability Program (ESP) on a frozen lake in the Arctic Circle in Lapland over two memorable February days in 1997.

The original system was harsh but it simply would not let you send one of the test cars out of control and into a snow bank unless you behaved like a lunatic. If you insist on being stupid, the engineers said then, the laws of physics still apply, and a decade later Mother Nature has not repealed them.

But if you're driving around the world like a person who does not want to risk her life or the lives of others, then ESC can be a huge help to you. Nearly a decade ago I called it the most important safety advance since seatbelts, and nothing I've seen since has caused me to change my opinion.

Consider that the IIHS study found that ESC reduces the risk of all single-vehicle crashes by more than 40 percent and fatal ones by 56 percent. The reduction of rollovers could be reduced by 80 percent.

The IIHS researchers estimate that if all vehicles were equipped with ESC, as may as 10,000 fatal crashes could be avoided every year in the U.S. Doing a rough conversion to Canada, that means about 1,000 fewer fatal crashes in this country.

Electronic stability control is pretty simple in theory, but difficult to execute. Essentially, the system compares a vehicle's actual path against the path the driver wants it to take and makes corrections to bring the two into synch. This it does primarily by applying one brake at a time (something the driver cannot do) and by keeping the engine at the optimum power level for the specific conditions.

As a result, ESC is great at stopping vehicles from skidding out of control into the path of other vehicles, or sliding off the road into situations that cause rollovers.

The availability of this technology is growing, but of course the insurance industry that controls the IIHS is not happy with the growth of its use. The insurance companies are concerned with America's safety, and are possibly also interested in reducing the amount of money they'll have to pay out in the future.

Either way, it would be good for anyone buying a new vehicle to make an effort to see that they pick something with electronic stability control, regardless of its commercial name.

As is the way of these things, ESC tends to be standard equipment on more expensive cars, and optional on the less expensive models. It can be a stand-alone option or grouped in with a bunch of other features, so ESC can cost a few hundred dollars to maybe a couple of thousand.

The good news is that the vehicle manufacturers have been making a special effort to get ESC into the vehicles (SUVs and full-size vans) most prone to rollovers, and this year GM has raised the bar by putting it into a full-size pickup (the Chevrolet Avalanche) for the first time in the industry.

This is in line with the world's biggest-selling car company's plan to make ESC (called StabiliTrak in GM speak) standard on all of the cars and trucks it sells in Canada and the U.S. by the end of the decade. 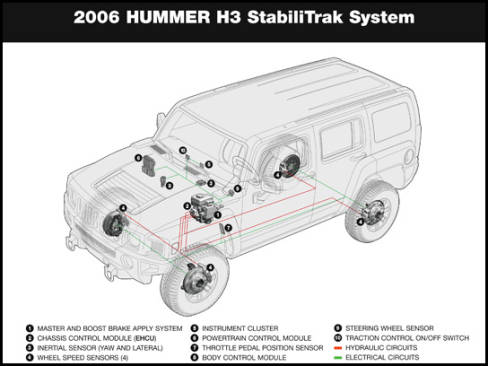 Ford and GM Have Donated 100 Vehicles to Ukraine

Ford and GM are sending 100 vehicles to Ukraine to help humanitarian efforts. Specifically, 50 Ford Rangers and 50 Chevrolet Tahoes are headed to the country...

Chevrolet Is Up to 110,000 Reservations for its Silverado EV

There are already 110,000 reservations in the books for the future Chevrolet Silverado EV, which was only presented last month, don’t forget. That doesn’t pu...