With the exception of pickup trucks, the compact SUV is the most popular segment among consumers, period. So it’s no surprise to find it chockful of quality products, as the auto manufacturers try to outdo each other to win the favour of these masses of buyers.

As we start to get our first trickle of 2020 models on the market, we take a look at what’s out there in the category of Compact SUVs in 2019 and 2020 for Canada. Because we had to put them in some kind of order, we went with the best-selling models in the first part of the current year, from one to 12.

Entirely revised for 2019, the RAV4 continues to reign at the top of this supremely popular segment. The aging model that preceded it still managed to end its run in 2018 at the top of the sales chart in its class. In the U.S., it ended fourth overall, behind only the three best-selling pickups from the American Big Three. The new version is even more refined, and it has continued to seduce customers by the ton.

There is a caveat, however, and it’s a potentially significant one. We just recently learned that the 2019 RAV4 failed the so-called moose test performed by a Swedish magazine. The test is designed to measure the vehicle’s ability to safely avoid large objects that appear suddenly on the road ahead of it. Toyota Canada told us that its results for the same test showed the RAV4 performing well, and that it is currently in contact with the magazine to understand the discrepancies in the results.

“The quality of execution has clearly been upgraded, especially inside, where the dashboard for example benefits from better materials and a much-improved presentation. The driving experience overall is also much better. And, we expect that the hybrid version will become a common sight on Canadian roads.” 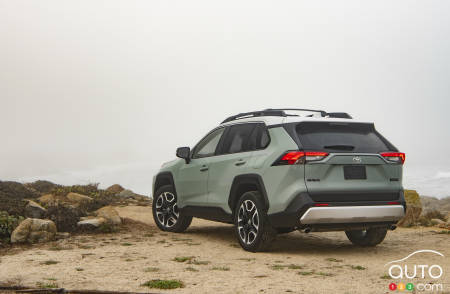 Auto123 puts together a definitive subjective ranking of the Top 10 best compact SUVs available on the market in late 2021 and for 2022. The way we see it, t...