The brand-new revived Toyota Supra is barely launched, but already Toyota is hinting at more-powerful variants to come, which should be music to the ears of many lovers of high-performance sports cars.

But, the news is not all sunshine and roses: In an interview with Autoblog, Toyota’s Tetsuya Tada confirmed that there is no manual-gearbox Supra in the works. Here, succinctly, is what the engineer in charge of both the Supra and the 86 had to say about the stick shift many have been clamouring for:

"Customers who want a manual should choose the Toyota 86." 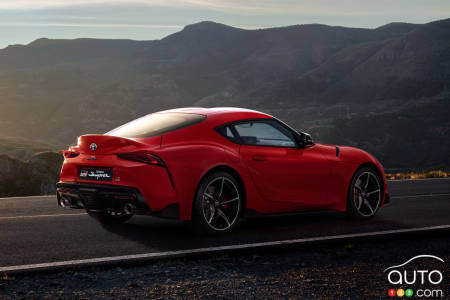 The current Supra available to consumers since this spring has a maximum output of 335 hp available from its 3.0L 6-cylinder, wedded to an 8-speed automatic transmission, and Tada made clear to Autoblog that this might increase in subsequent offerings:

"With a sports car, the promise is to offer more performance with each additional version."

Without getting too specific about what we can expect down the road, Tada did say he thinks an increase of 50 hp is probable. The timeline for that is medium-term, however, as Tada alludes to the next refont of the model, which is due in about three years.

Beyond the power boost, Toyota might also introduce other performance upgrades such as carbon-ceramic brakes, and this would come as soon as next year. Beyond that, we’ll have to wait and see what other goodies Toyota adds to its revived little sports car to keep consumers interested.

Our review of the 2020 Toyota Supra