Without question, the most noteworthy bit of news to come out of the automotive industry this week is the official end of the Volkswagen Beetle. The news of its demise was delivered months ago, but this week production officially came to an end. Which is of course when the historical significance of the model hits home.

It matters little that the current Volkswagen Beetle no longer has much if anything in common with the original version, but still, it’s not every day we say goodbye to such an iconic name.

Nowhere is the Beetle’s departure more acutely felt than at the plant in Puebla, Mexico, where it was assembled. But they will continue on with production, and the model they will produce is the Tarek SUV, essentially a smaller version of the Tiguan.

The announcement was made at the plant itself by Steffen Reiche, head of operations for Volkswagen in Mexico, during an event commemorating the last Beetle to come off the production line. The executive explained that actual production of the Tarek would begin next year, and that the first models would hit dealerships early in 2021. 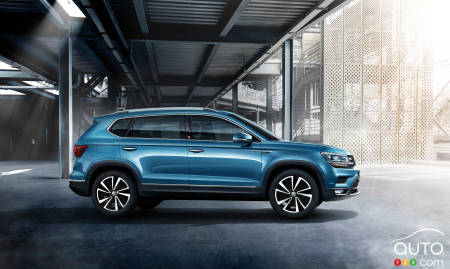 Scott Keogh, CEO of Volkswagen America, told Automoive News that the Tarek would be sold in the U.S. (and we presume in Canada as well), but under another, as-yet-unknown name.

The model is actually already sold in China as the Volkswagen Tharu. With a length of 175 inches (445 cm), it’s 10 inches (25.4 cm) shorter than the Tiguan. In China the model comes with several different 4-cylinder engines, all wedded to a 7-speed dual-clutch automatic transmission.

The model destined for the North American market will be based on the Tharu, but it will be retouched to make it more durable.

"We'll adapt the Chinese model for this market. Our version will be the stronger one, the rougher one compared to the Chinese one.”

As for versions and powertrains we might get, launch date remains far off and we’ll have to be patient to know more.  We can surmise VW will reach into its existing toolbox to find the components it wants to place into the SUV.