We’ve seen flying vehicle concepts presented before, and more than one auto manufacturer around th world has been studying the possibility of developing one. Some have taken it a step further and already have models in the works. Last week, it was Volkswagen Group's turn to unveil a flying taxi concept, being developed more specifically by the auto giant’s Chinese division.

The company describes the model a "passenger drone", designed for vertical takeoffs and landings. Of course, its powered entirely by electricity, and it’s even being designed to operate autonomously. That last might prove a particularly daunting challenge, because it’s one thing to convince folks to climb aboard a small flying vehicle, it’s another to do so when there isn’t a pilot at the controls.

These are very early days in the development process, of course; the model shown last week is design study. VW says the vehicle should make its first flights this year to test its viability before a second-generation prototype is ready for more extensive testing, starting in the summer of 2023. 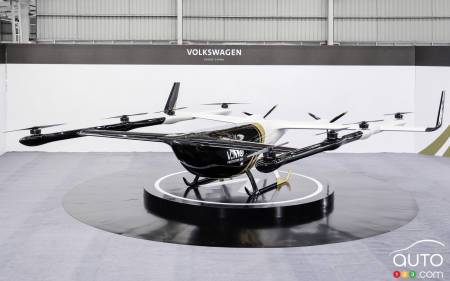 Conceptually speaking, the vehicle is equipped with eight propellers for vertical lift and two for horizontal flight. The targeted range is about 200 km, with a maximum carry load of four passengers and their luggage. The Volkswagen Group sees the service as initially a high-end offering for individuals or small groups who want to save time when traveling within cities or heading to or from an airport.

Several Chinese partners are contributing to the development, including Hunan Sunward Technology, a subsidiary of the Hunan-based Sunward Manufacturing Group. This company specializes in the development and sale of aeronautical products, particularly light aircraft.

Other companies that have been involved in developing flying vehicles include the Hyundai group, the Lilium company and the Volocopter firm, which is supported by Mercedes-Benz, as well as Geely and Joby Aviation, supported by Toyota.

Audi and Porsche, also from the Volkswagen Group, have also presented flying taxi concepts, but it appears the parent company will lead the way. In 2020, the automaker set up a vertical mobility project as part of a global strategy to explore new concepts for sustainable, all-electric mobility. 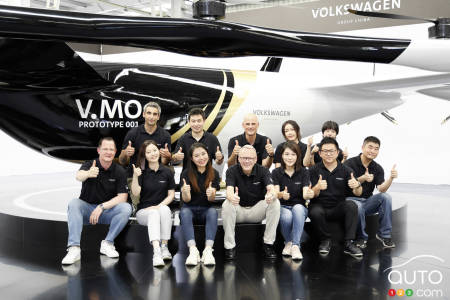