The last few years have seen Volkswagen preview several different concept vehicles under its new ID (for Intelligent Design) EV banner. Up until now, fans of green cars and of Volkswagens have had to wait patiently for a production version to emerge from the crowd of prototypes like the ID CROZZ, ID BUZZ, ID ROOMZZ, ID VIZZION and others.

The first real live ID model is finally set to make its official debut later this year. An online leak of images has, however, compelled VW to confirm the name of and provide other details about its first EV. What’s more, the automaker has announced it is taking orders on the Golf-sized ID.3 model starting now.

“With the ID.3, we are starting from the centre, the Volkswagen brand’s core, in which the majority of the models and sales volume can be found. The number 3 also signals expandability into the segments above and below it.”

- Jürgen Stackmann, Member of the Board of Management Volkswagen Brand for Sales, Marketing & After Sales

The slightly camouflaged ID.3 is clearly influenced by the Golf, sporting very similar headlights for example, and has roughly the same dimensions. It has also retained most of what we saw in the concept version previewed previously. 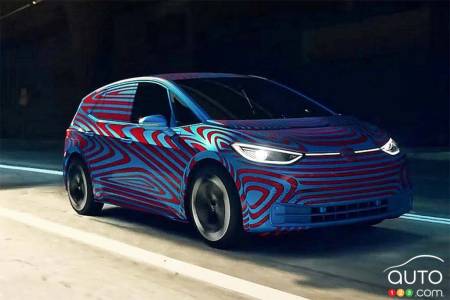 This being an EV, it has no need for a front grille - so there is none.

The ID.3 is built on Volkswagen’s new MEB platform, developed specifically to work with electric powertrains. The company plans to use that architecture for over a dozen new products in the coming years.

The first vehicle under the ID banner will come with a range of around 200 miles (or some 330 km). But Volkswagen will offer different battery types and sizes that will bring with them different ranges – and different price tags, of course. The most expensive configuration will give motorists a range of around 560 km.

The ID.3 can be charged on Level 1 and Level 2 outlets (120-volt and 240-volt), but also on high-speed Level 3 stations. Volkswagen also plans on increasing the charging capacity of its products as quickly as possible. 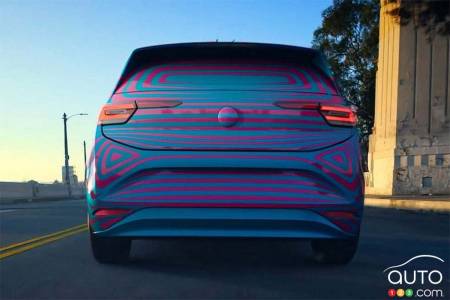 After the years of promises, development, concepts and more promises, the advent of the ID.3 undeniably represents a watershed moment for the German automotive giant; its arrival is highly anticipated, to say the least.

And to think that less than four short years ago, Volkswagen was still heavily reliant on its diesel-engine products, and no one had any inkling that a scandal of unimaginable proportions that would shake the company from top to bottom was about to explode.

As we’ve noted before, changes in the automotive industry in the 21st century are massive in scale and happening at lightning speed.