The new, eighth-generation 2020 VOlkswagen Golf is set to get its official world premiere on October 24, and VW has released some early teasers to whet appetites ahead of the reveal.

The sketches reveal an exterior design that treads on fairly familiar ground, which is not surprising given the longevity of the Golf’s basic look and the continuing popularity of the model. If it ain’t broke…

Volkswagen has played with the design of the headlights, and the front fascia has what looks like a thin light strip running across it horizontally. The model will, we presume, feature the recently revealed new VW logo as well. Overall, Volkswagen’s designers were tasked with making the car “more dynamic than ever”. Hard to tell exactly from the one exterior sketch here, but we’ll know more on October 24.

The interior is where things get more radical for the Mk 8 generation of the Golf.  There’s little of the overall design that’s recognizable from the current model, starting with the scarcity of physical buttons, which makes for a much more streamlined dashboard that stretches unbroken from the driver’s door to the passenger’s door. 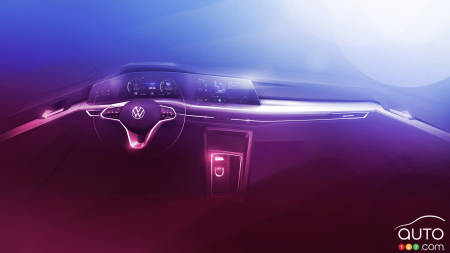 In the absence of buttons, many commands have been integrated into the multimedia system accessed via the touchscreen, which actually bleeds right into the digital instrument cluster in front of the driver. Off to the left of that cluster we see what appears to be another yet display screen.

On the lower part of the central console sit controls for the climate control system, and we can see that the thin air vents have been placed lower down to make way for all those screens.

The new Golf is expected to be slightly larger overall, meaning passengers should benefit from a more spacious interior environment.

After the October 24, reveal, Volkswagen plans to being the new eighth-generation 2020 Golf to market initially in Europe, though North America should follow very quickly. Beyond that, the company has confirmed both GTI and R variants to be ready at some point in 2020.

Gas Engines Part of the Plan for the Volkswagen Golf, Gen...

Volkswagen just presented the new 8th generation of its Golf, but the company is already looking ahead to the next edition, confirming that it will run on ga...